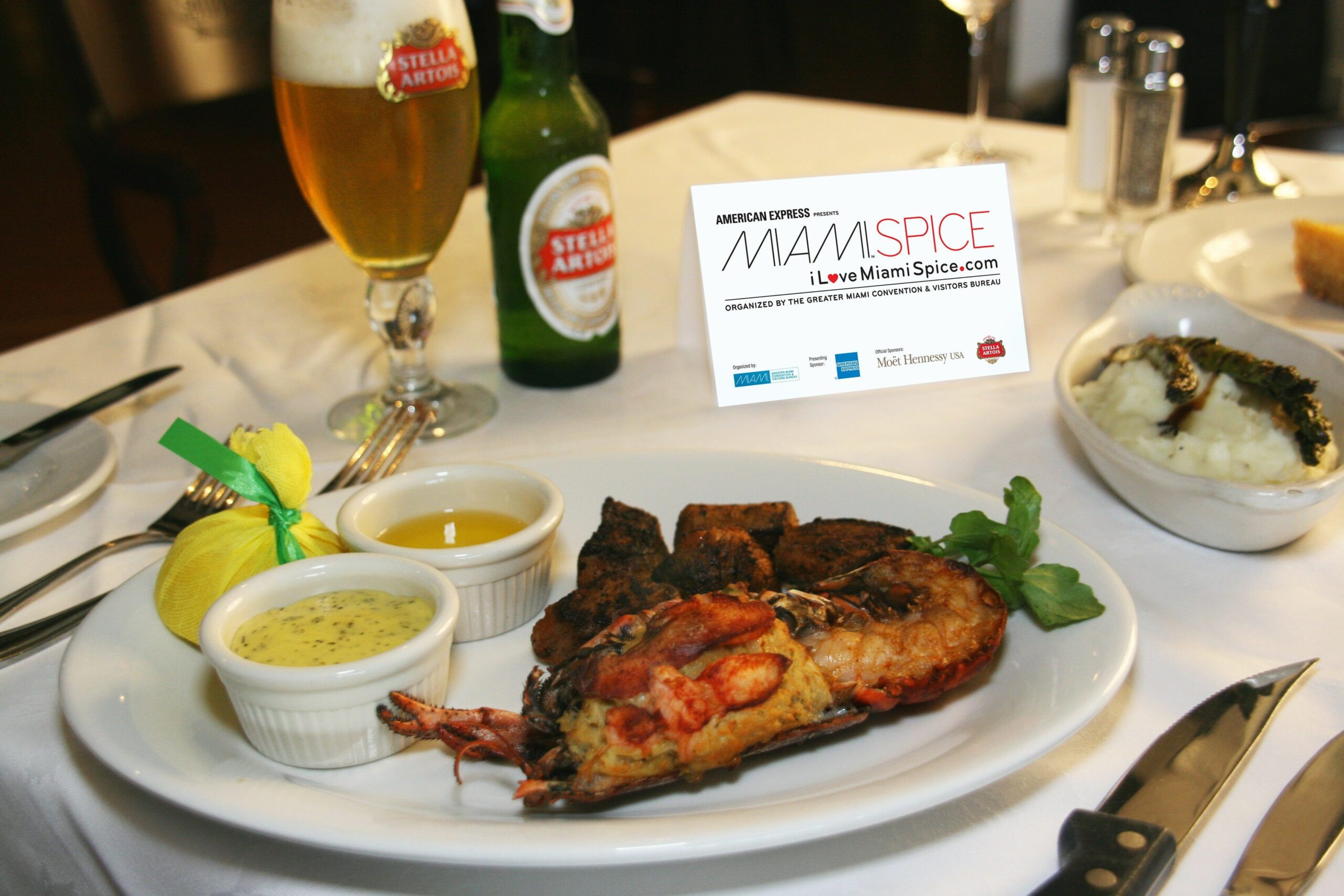 Every year Miami becomes a great festival gastronomy During two monthsAugust and September: the Greater Miami Convention & Visitors Bureau (GMCVB) organizes Miami Spice, an event that brings together the greatest culinary talent of the beach and its surroundings at affordable fixed prices. The 2022 call attracted more than 200 restaurants.

before it’s over September you have to take advantage of three-course menus for USD 28 for the lunch and the brunchwith two options for Dinner: US$45 and US$60. Prices do not include taxes or tips, and in many cases neither beverages.

Until Friday, September 30, you can try the most delicious dishes from the different cuisines that converge in Miami. We recommend 10 of them.

the chef michelle bernstein summoned the cocktail guru Julio Cabrera to create a perfect retro atmosphere of Cuba. The Guide michelin already highlighted this venture from the winner of the James Beard Award for its traditional dishes with a contemporary twist. With live music and a decoration that sums up decades on the island and South Florida, this corner of the Little Havana.

Drinks such as the Daiquiri, the Periodista, the Hotel Nacional —with pineapple rum and apricot liqueur— or the classic Mojito whet the appetite to taste classics such as roast suckling pig with yucca and tangerine sauce, an extraordinary variety of croquettes and empanadas, fresh fish sautéed in mango and lime sauce, foie gras on French-Spanish toast and rice with coconut and suckling pig.

The Chinese-Latin fusion gives rise to a unique experience and an unforgettable concept. Giovanni Pisfil created the menu of this gem located in Brickell: spring rolls of old clothes, shrimp enchilada dumplings or a huge cutlet with tenderloin accompanied by lemongrass and ginger chimichurri are some of the highlights of the menu.

With tropical decor and crystal chandeliers, CH’I also offers a cocktail bar notable, with the Pau Pau as a flagship —it combines fruitiness with spice— and classics such as the Mariposa.

Almost hidden behind a patio, whose abundant plants can be seen from the inside, the chef’s new restaurant Michael Beltran it is Italian 100%, but it concentrates on the spirit of the coasts. Thus, there are combinations such as the snail Bolognese, with mortadella mousse and herb croutons, or the turbot piccata with potato aligot. Other options include the duck ragout with caramelized radicchio and foie gras mousse or the stracciatella soup with tomato carpaccio.

These bold flavors suggest raw materials of exceptional quality. All the pasta in this space in Coconut Grove, recommended by michelinThey are homemade. For another $30 the sommelier will choose perfect pairings for each course. The panna cotta is legendary.

This huge patio in Coconut Grove, one of the areas with the most character in Miami and its surroundings, the view of the peacock park and the bay offers the new inspirations of Giorgio Rapicavoli (Eating House) based on the simple treatment of the best ingredients. Typical dishes of influence Latin American Y european They make up a menu divided into four parts: starters, garden, sea and land.

Grilled octopus, watermelon salad, buffalo churasco with fries (for two), nori seaweed crusted tuna and brussels sprout and cashew salad with wasabi aioli or roasted chicken with gnocchi in black truffle sauce are some of the delicacies that can be accompanied by a selection of draft beers or Spanish wines.

Recommended by michelin, this gift from the Greek gods has been on the beach for 10 years. creation of Costas Spiliadisa chef son of a chef, has branches in Montreal, New York, London, Las Vegas, Los Cabos and of course, Athens.

It is difficult to get to read the menu: in general the public is eating before doing so, after a small tour of the raw bar, on view in a kind of redesigned industrial warehouse. Oysters, mussels, lobster, squid, octopus, red mullet roe and smoked fish will come between you and the thin slices of fried zucchini and aubergine with creamy ttzatziki, the whole fish roasted in salt, the salads with feta cheese and olives, the ceviche Greek and the skordalia.

The Southern United States cuisine at its highest point, with one of the collections of bourbon largest in Florida. Some typical dishes are shrimp with polenta, chicken with sweet potato waffles (don’t miss the combo with watermelon, cheddar and spicy honey sauce) and the jewels of the soul food: fried chicken and rib strips marinated and grilled.

From the magnificent ceviches —there is a sampler to try them all— to dishes from the kitchen mexican contemporary, the menu is a journey through the flavors of the Americas. Vegan tacos, shrimp moqueca, cilantro soup, grilled octopus, quinoa salads can be savored with boutique wines from Chili Y Argentinaor with drinks (50% off between 4 and 7 in the afternoon) such as Margaritas, Pisco Sours and Mimosas.

Among the sweets, the cheese flans stand out at the perfect point, the chocolate cakes and the cajeta pigeons (sweet milk), which can be accompanied with an espresso famous in the area.

The chef’s new restaurant Michael Bolen enlivened the tapas offer in Miami with its white garlic asparagus with melon and cherry pickle, an eggplant and goat cheese pâté and its giant prawns with Calabrian chili and lime butter. The koji-aged strip with a salt and vinegar watercress is a delight for two.

A favorite of the regulars are the bitter wheat pasta from Sonora with Taleggio-style morel sauce and the homemade ice cream, whose secret ingredient makes it extra creamy.

Of Barranquilla to South Beach, Samuel Gorenstein —one of the partners of MyCeviche and Pura Vida— has created an Israeli cafe in one of the old houses south of Calle 5. Roasted beets, warm pita bread (all breads are homemade) to try a babaganoush or a hummus of competition, fattoush salad and Jerusalem bagels with avocado, egg and feta cheese are some popular entrees.

Roasted whole sea bass with preserved lemon tapenade, lamb kefte and sumac chicken shashlik are some of the shareable entrees. You should not leave without trying the chef’s sweets Hedy Goldsmith: Pistachio backlava with orange blossom and cardamom syrup, semilina and honey cake or panna cotta with berry puree stand out.

Seven years ago this temple opened its doors for the high kitchen veganone of the most recognized in the United States. All dishes are made with fresh or plant-based ingredients, with a focus on health and the planet. They dazzle the carrot lox with avocado cream cheese, mustard caviar and coriander on ciabatta; the double hamburger (Beyond Burger, totally vegan) with American cheese, lettuce, tomato, pickles and sauce; the jackfruit dumplings, the transparent Chinese noodles with oyster mushrooms and the asparagus soup.

The cocktail bar is famous: the Guava Margarita, the Mango Pisco Sour and the Passion Fruit Daiquiri stand out. The clientele loves the ice creams, all homemade, the coconut flan and the warm chocolate brownie.

The new chicken Big Mac can now be tried in Miami

Miami on track for clean energy with 63 new electric buses

Gloria Estefan turns 65 made a doll