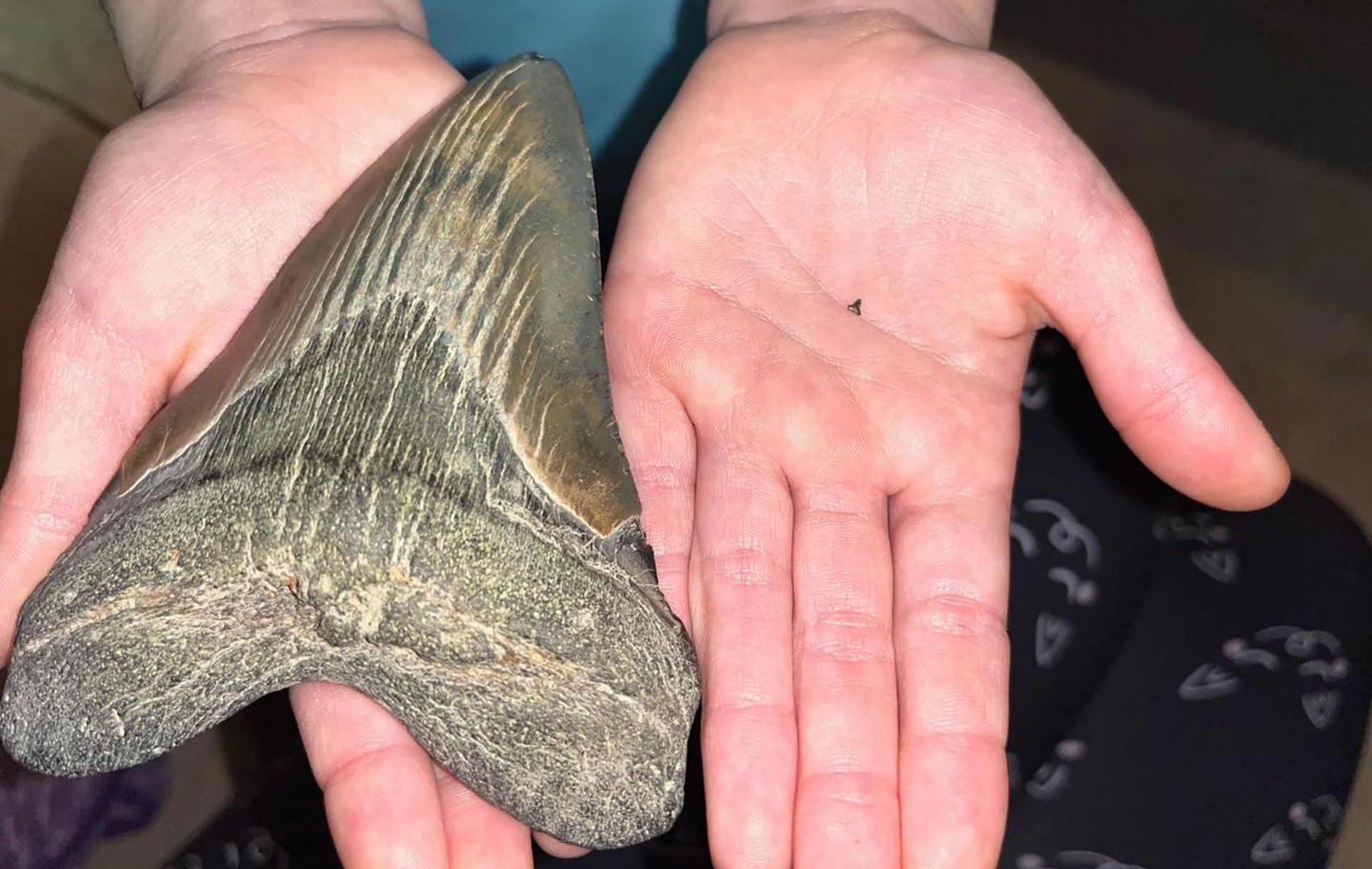 Molly Sampson, just 9 years old, discovered a fossilized tooth of one of the most important aquatic species in history on a beach in Calvert Beach, Maryland, while she was on Christmas vacation.

The BBC media echoed this news, explaining that the minor told her mother that she was “looking for Meg” while she was knee-deep in water. And she went there exactly where she found it. A tooth belonging to the now extinct shark species Otodus megalodon.

The tooth Molly found had 5 inches long (12.7 centimeters)as big as his hand, according to his mother, Alicia Sampson, who shared the news of the find on Facebook.

The little girl’s mother explained in the post that Molly and her sister Natalie wanted to “go hunting shark teeth like professionals” and had ordered insulated chest waders as a Christmas present.

Almost as soon as they received their gifts and finished their breakfasts on December 25, they headed for the shores of the nearby Calvert Cliffs with their father Bruce.

After the find, the family took the tooth to the Calvert Marine Museum, whose paleontology department confirmed the shark’s identity and congratulated the “future paleontologist” on Facebook.

“People shouldn’t get the impression that teeth like this are common along the Calvert Cliffs,” said Stephen Godfrey, the museum’s curator of paleontology. He also called it a “once in a lifetime find.”

“And he didn’t have to dig into the cliffs to find the tooth, it was in the water.”

“She’s always wanted to find a ‘Meg,’ but for whatever reason, she pulled it up on Christmas morning,” Molly’s mom told CBS.

The megalodon, a shark that inhabited the oceans 23 million years ago and became extinct about three million years ago, was bigger, faster and more voracious than estimates made so far, says research recently published by the journal Science Advances.

Its exact size had remained vague until now because its skeleton is made up of cartilage that rarely fossilizes, but scientists relied on an “exceptionally well-preserved” fossil to recreate the first three-dimensional model of the aquatic giant.

The resulting specimen is 15.9 meters long, has a body mass of 61 tons, and has a speed of 1.4 meters per second (5 kilometers per hour). His jaw allowed him to eat an 8-meter orca in just 5 bites.

Its dimensions were also calculated based on its teeth and the skeleton of a great white shark, its closest living analogue, and those 61,560 tons are 23% more than previously estimated. However, there are fossilized vertebrae that are 50% larger than those used for the model, which suggests a maximum size of almost 20 meters, larger than that of a modern humpback whale.

The megalodon needed 98,175 kilocalories a day, an amount 20 times greater than that required by an adult great white shark.aim Science Advances. If it feeds exclusively on its largest prey, it may need to eat only every 145 days.

Its speed allowed it to easily go to different feeding grounds, a predation tactic also used by the white shark to find high-calorie food.

Their extinction was attributed to a reduction in coastal habitats from the late Pliocene (spanning from 5.33 million years ago to 2.59 million years ago) and probably also resulted in the disappearance of other marine megafauna species that could have been their prey.

(with information from BBC and EFE)

“It’s beautiful”: a woman found a giant tooth that could have been from a megalodon, one of the largest predators in history