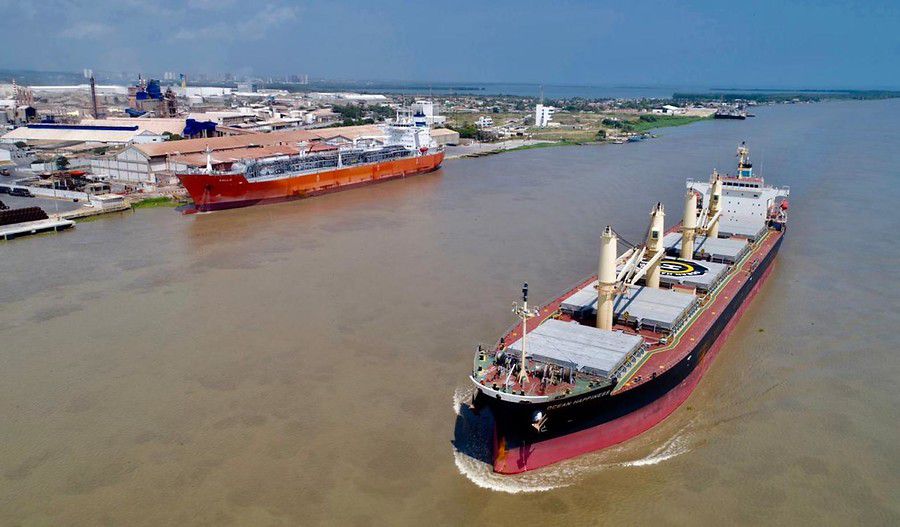 In September 2019, the authorities of Barranquillathe capital of the Colombian department of Atlántico, announced the arrival of Chinese dredger Hang Jun 5001 as part of an agreement signed between Financiera de Desarrollo Territorial, a state entity in charge of providing resources for projects in the regions, and Cormagdalena, the regional entity in charge of recovering navigation and port activity.

Based on this agreement, the Shanghai-Ingecon consortium, made up of the Chinese firm CCCC Shanghai Dredging Co (70% owner) and the Colombian Ingecon SA (30%) to remove sediments and reach a minimum draft of 10.2 meters and thus facilitate the operation of ships in the access channel of the port of Barranquilla.

However, the consortium led by CCCC Shanghai Dredging Co began to breach its commitments shortly after its start-up citing atmospheric problems, the fury of the wind and the difficulty presented by the waves, which led the port authority to reduce the operational draft; in practice, to restrict the size of the vessels that could operate in the Barranquilla maritime terminal, in order to avoid accidents.

And this Tuesday, a report from Barranquilla revealed that in the first days of 2023 they were paralyzed near 40,000 tons of merchandise such as corn, wheat, steel and coal due to the low draft, which is 7.5 meters in the port area.

The union leader Lucas Ariza, director of the Association of Atlantic Ports (Asoportuaria), informed the newspaper The Herald that the lack of a depth of water necessary for a ship to float freely in the area has led to that about ten boats had to lighten their load to be able to enter or leave the port of Barranquilla. “We have estimated the cost overruns at around USD 3 million for the port sector in general,” he said.

Ariza also warned about the concern about the entry of ships with fuel, which could be slowed down if the draft continues to drop. “Fuel mobilization planning could be at risk, which would lead to using other means of transportation that are much more expensive than sea routes,” he added.

“The situation is critical, chaotic,” Ariza remarked, noting that the national government would have agreed to hire a new dredger so that it advances in the removal of sediments while it closes the contract with the company that will be in charge of the work during the first six months of 2023. “We do not know how they will proceed, nor do we have knowledge of the times (…) In the midst of The uncertainty that we must have is the certainty of when the dredging will resume,” he said.

On the other hand, the Port Affairs Office of the Barranquilla Mayor’s Office reported that the figure of public calamity for this crisis, “inviting the national government to take immediate measures to solve the urgency that the sector has.”

From solution to failure

Already in April 2022, after a Liberian-flagged ship was trapped in Barranquilla when it set sail for India, the head of the District Port Affairs Office -José Curvelo- expressed his dissatisfaction with the delays and delays in the work of the Chinese consortium. “Start the engines, let’s make up for lost time. The port demands better draft”, hurried the official, according to the digital media Zone Zero.

At that time, some port representatives revealed that the Chinese would have carried out dredging activities where they were not needed, in order to justify the contract. In addition, according to then-congressman César Lorduy, the Chinese contractor would be working with inappropriate equipment.

The contract, which had been presented by the director of Cormagdalena, Pedro Pablo Jurado, as the solution that would give “security and tranquility” to the port operation in Barranquilla is, according to the port workers, a real failure. The ships remain in permanent danger of running aground at any time, which at least three have already done, since November 2019; others have had to be diverted to Cartagena and Santa Marta; several have been subjected to long waiting periods increasing the costs of the operation and even the same chinese dredger was about to get trappedaccording to what was said, due to a bad maneuver by the crew.

Port manager Lucas Ariza calculated that each deviation can represent cost overruns of hundreds of thousands of dollars in operations, which affects the competitiveness of the city. According to Ariza, despite the resources that have been invested to have a permanent dredger, the minimum draft of 10.2 meters contracted has never been achieved.

A report on Chinese illegal fishing in Argentina: they warn of looting that could deplete the presence of species

The US continues to offer coronavirus vaccines to China, but the Xi Jinping regime rejects them