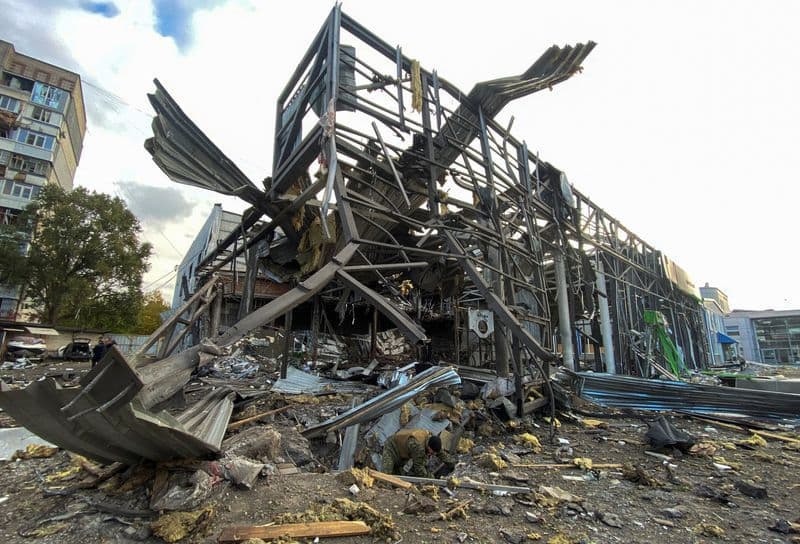 The Ukrainian city of Zaporizhzhya suffered late Friday night a missile attack that damaged at least one industrial infrastructureamong whose rubble there may be trapped peopleAccording to the mayor of the city, Anatoly Kurtev.

“The Putin’s cynical terrorists once again they viciously attacked Zaporizhzhya in the evening. Enemy missiles hit one of the infrastructure facilities. A fire broke out as a result of enemy attack,” he wrote. kurtev on Telegram.

These people who could be trapped would be employees who were working at the time of the attack.

“There may be people under the debris right now,” Kurtev informed. Ordinary, peaceful people who were just working at the time and posed absolutely no threat to the Kremlin henchmen”.

As a result of this attack, half the population of one of the city’s districts was left without heating and several houses were damaged, although they continue to measure the scope of this new Russian onslaught, as reported by Kurtev in a subsequent message.

“Russia is a terrorist country You will be responsible for all your actions. His wickedness will not go unpunished in any case”, sentenced the mayor at the end of the text.

kurtev reported that the emergency services are working in the place after the impacts.

Russia bombed on Thursday gas production facilities and an important missile factory in new attacks against critical infrastructure in Ukraine.

Explosions were heard in various parts of the country, including the southern port of Odessa, kyiv and the central city of Dnieper, and civilians were urged to take shelter while air raid warnings were sounded.

Among the targets was the huge Pivdenmash Missile Factory, on the Dnieper, said the Ukrainian prime minister, Denys Shmyhal.

It is not clear to which facilities gas production he referred.

Russia has intensified attacks on Ukrainian power facilities in recent weeks, launching some of the most intense missile attacks since it invaded Ukraine on February 24.

Ukraine has said its air defenses have shot down many of the missiles and drones fired in recent weeks and claimed two Iranian-made Shahed cruise missiles and four drones were destroyed near the city on Thursday.

So far no deaths have been recorded in the new series of airstrikes.

“(Russian President Vladimir) Putin wants to deprive millions of people of electricity and heating, in a context of freezing temperatures. Send Ukraine more air defense and anti-missile systems to prevent this tragedy. Delays cost lives”. said the spokesman for the Ministry of Foreign Affairs, Oleg Nikolenko.

Almost nine months after the invasion, what are Vladimir Putin’s ambitions in Ukraine?