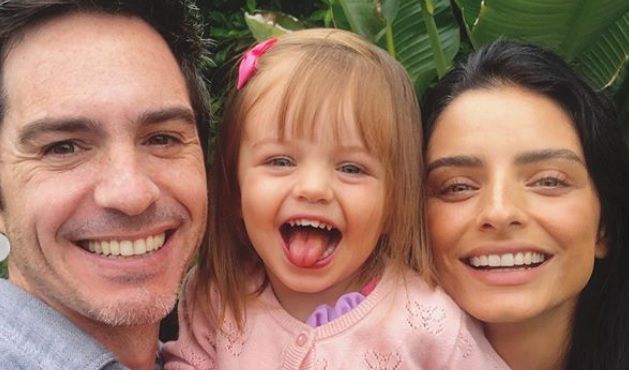 Aislinn derbez surprised on social networks by launching a birthday greeting for her ex-husband Mauricio Ochmann. The actress and Kailani Ochmann Derbez recorded a tender video where they sang Happy birthday for the celebrated.

Last Tuesday, November 16, Mauricio Ochmann turned one more year of life and, very early on, the celebration began with a special breakfast prepared for him by his girlfriend, the model. Paulina Burrola. Through Instagram, the protagonist of Bad He shared part of that intimate moment in addition, he posted some of the congratulations that both friends, family and fans sent him.

Among the large number of messages that Mauricio Ochmann received, a short video that his ex-partner Aislinn Derbez and his daughter Kailani sent him during the afternoon. In the storie the host of the podcast appears The magic of chaos next to the little girl of only three years; in front of the cell phone and with a big smile, they both intoned Happy birthday, a song in the public domain characteristic of birthdays.

As the seconds passed, Kailani stopped singing and started laughing, so Aislinn Derbez had to finish the song alone. In this way, mother and daughter congratulated Mauricio Ochmann on his 44th birthday.

“Happy birthday to the best dad”Wrote the native of Mexico City about the fragment that she adorned with emojis and a sign.

With this action, Aislinn Derbez hinted that she has a cordial relationship with her ex-husband almost a year after their separation, especially, the actress continues in constant communication with Ochmann for the well-being of the daughter they procreated together in 2018.

The protagonist of the series The Chema and the member of the Derbez dynasty married in May 2016. Their ceremony was framed with luxurious details and the bride wore three different designs throughout the day, looks that highlighted her silhouette and beauty. Two years later the couple received Kailani and after disagreements, the couple separated in early 2020.

After a few months single, Mauricio Ochmann started a new relationship with the Sonoran model Paulina Burrola, a situation that sparked controversy due to the promptness with which the actor decided to give love another chance. However, today the new relationship remains afloat and both have not stopped sharing with their social media followers the unique moments they live together.

An example of this was the celebration of the birthday of Ochmann, who welcomed the 44 years with a surprise breakfast that Burrola prepared for him. From his Instagram stories, the actor shared his surprise when he discovered a great gift, balloons, a chocolate cake, coffee and waffles.

In addition to the birthday surprise, Paulina Burrola also dedicated an emotional message to the actor on his Instagram profile and a photograph where the two posed together with the sea in the background.

“I celebrate your life my love. I cannot feel more honored to share this day with you and be a part of your life. You deserve the most beautiful thing in the world. Thank you for sharing your nobility, love, light and vibes so special to this [emoji de mundo] Happy Birthday. I LOVE YOU, ”he wrote.

Later, Mauricio Ochmann boasted that he had had the opportunity to spend part of his day with his two daughters Kailani and Lorenza. Before Aislinn Derbez, the American had already married María José del Valle Prieto and, as a result of that marriage, he had his eldest daughter. However, the relationship did not last and they ended up separating in 2008.

Eugenio Derbez caused laughter with a new poster of “The P. Luche family” with Chaelin CL

Aislinn Derbez recounted riding accident: “I was shocked and lost the memory of the event”

Aislinn Derbez surprised by talking about her imperfect life