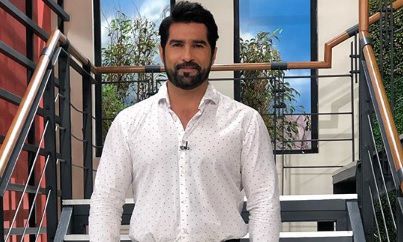 The actor Arturo Carmona He spoke about the love relationship he had with the actress and model Aracely Arambula, who had two children of the iconic and controversial singer Luis MiguelIn addition to this, the Monterrey native revealed that served as the father figure of the infants.

After Arámbula and the interpreter of “Now You Can Go” ended their relationship, the actress decided to keep her love life away from the focus of the media. However, during an interview with the driver Fernando Lozano, Arturo Carmona confessed that he was a partner of the protagonist of The Doña.

“Yes, we were a couple, we were boyfriends … We do ‘Gardenia perfume’, she is Gardenia, I am the villain of the story, we live together a lot. We started to live together … We got married in Sonora precisely, on tour, at a dinner where Jorge Salinas, Elizabeth Álvarez, very father and We saw each other very often, practically every day, I had a very nice relationship with the children”, Revealed the actor.

“The children and I had a very nice bond… we lived together. I dare say that I became the father of those children at that time“Said Carmona.

Although the relationship between Arámbula and Carmona was always a relationship that only people close to them knew, the figure of “El Sol de México” always persecuted them because it was rumored that the actress could not have a romantic partner due to an alleged contract with the father of her children, but the actor denied the speculation.

Although there was never an agreement between Arámbula and the actor to maintain their private romance, he mentioned that this began to bother him, however that was not the reason why they ended their relationship, because according to Carmona, the actress allowed Luis Miguel to stay with them when he went to visit his children.

“I was already very tired of many things, I was even offended, I could have felt like saying ‘I’m not so lying on the cot so that you’re hiding’, but I understood that it came from ‘El Sol’ but it was from ‘now, we already have more than a year’… I applauded that she caused the father to see his children, what I did not understand is that she went and stayed right there, it did not beat me. What I did at the time, without having the economic part that he has, is to go where my daughter was and stay in a hotel, not stay in the same house, “he said.

The most significant love relationship in the life of Luis Miguel was, without a doubt, the one he had with the soap opera actress, Aracely Arámbula, from 2005 to 2009, when they finally decided to part their ways.

In 2005, some photos of the couple walking the streets of Venice, Italy, while enjoying an ice cream confirmed their relationship and a year later, Aracely was confirmed pregnant of his first-born son, whom he named Miguel.

Later, in December 2008, the “Chule” gave birth to a second son, Daniel. During that period, the media had access to the family that famous people had formed. Nevertheless, everything changed in the years after and the legal confrontations began because the father did not comply with the maintenance of his children.

A condition that continues to this day, therefore, in accordance with what was declared on different occasions by Guillermo Pous, Aracely’s legal representative, the singer you have not paid your pension for at least two years of the two minors.

Aracely Arámbula confessed if her children want to be artists: “I have to respect the decision they want to make”