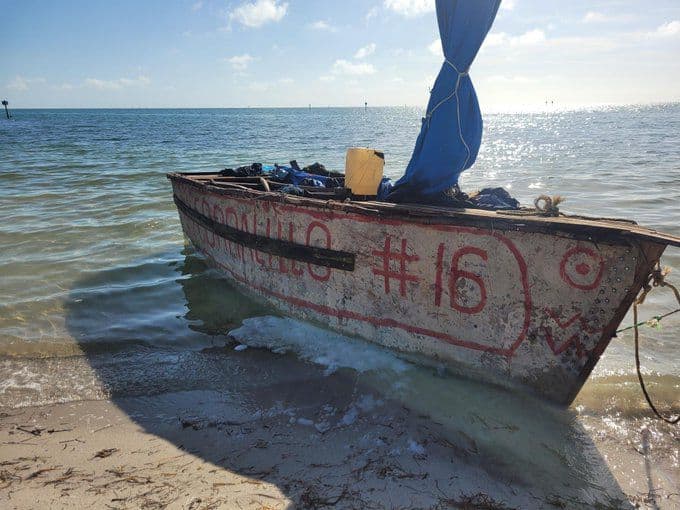 More than 75 migrants arrived aboard small boats at different points of the Florida Keys (southern US) in the last hours, as reported on Thursday to the television channel Local 10 from Miami official sources.

On this Thanksgiving, the most important non-religious holiday in the United States, there were at least four landings of migrants in the chain of islands located between the continental United States and Cuba.

“Our teams will continue to patrol on land, sea and in the air throughout the holiday season. Those who attempt to enter the US illegally by sea will be rescued and repatriated,” he wrote on Twitter on Thursday. Walter N. Slosar, chief of the Border Patrol (CBP) in the Miami Sector.

According to sources cited by Local 10more than 30 immigrants arrived in the uninhabited marquesas key, the westernmost of those islets in the Florida Straits. Another ten arrived aboard a boat at the Dry Tortugas Keya diving tourist destination with no permanent population, 19 disembarked in marathon and another 17 in Grassy Key.

they all went arrested and were left in the hands of the Border Patrol.

The information does not mention the nationality of the migrants who arrived in the Keys, but that is the US area closest to Cuba and it is presumed that they may be Cuban.

According to data from the US Coast Guard, its agents intercepted at sea during the month of October 1,132 Cubansa significant figure if one takes into account that in the previous 12 months there were 6,182 intercepted.

The numbers of interceptions of Cubans trying to reach the US by land are even higher.

Border Patrol reported last week that a total of 29,872 Cubans entered the United States irregularly through land borders in October, in the midst of a migratory crisis that has generated the largest exodus of people from the island in decades. Most of the Cubans, 28,848 of the total, entered through the border with Mexico.

Only Mexico, with 67,186 migrants, this time exceeded the number of Cubans arriving in the US, according to updated data from CBP.

Persecution in Cuba: Regime Tries Another 15 9/11 Protesters Who Face Up to 13 Years in Prison