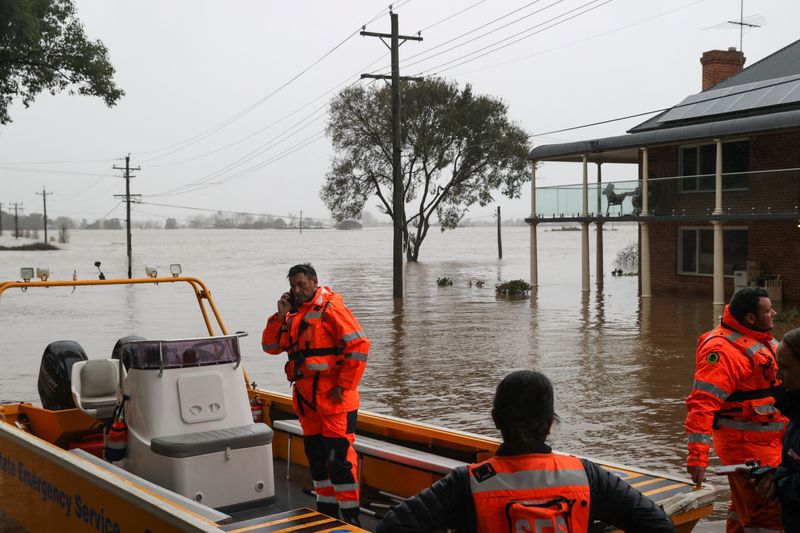 Torrential rain continued to batter Australia’s east coast on Tuesdayadding to Sydney’s flood crisis as thousands more residents were ordered from their homes as rivers rapidly exceeded danger levels. Roughly 50,000 residents of New South Wales, Sydney’s western suburbs, have been asked to evacuate or they were warned that they might receive evacuation orders, authorities said. Thus, Tuesday’s possibly 50,000 evacuees added to Monday’s 30,000 shows how the evacuees could continue to increase over the days.

“This event is far from over,” NSW Premier Dominic Perrottet told reporters. “Wherever you are, be careful when driving on our roads. Substantial risks of flash flooding still exist.” the prime minister communicated to his citizens. Australian Prime Minister Anthony Albanese, who returned to Australia on Tuesday after a week-long trip to Europe, said he would tour the affected regions on Wednesday with Perrottet.

The federal government has declared the flooding a natural disaster.helping residents affected by the floods receive emergency financial support.

The latest cell of brutal storms, which brought a year’s worth of rain in three days to some areas, is likely to abate in Sydney from Tuesday as the coastal trough moves north, the Bureau of Meteorology said. (BoM). Anyway, Flood risk could remain high through the week as most river basins are already close to capacity, even before the latest deluge. Some regions have received 800mm of rain since Saturday, dwarfing Australia’s annual average rainfall of around 500mm.

Winds of up to 90 km / h are also forecast in several places that have already been affected by flooding, thus increasing the risk of falling trees and loss of electricity due to downed power lines.

Battling rough seas due to weather conditions, emergency crews continued their rescue operations on Tuesday, in this case towing a bulk carrier that ran out of power off the Sydney coast after tow lines broke in bad weather, authorities said. The images that have been published on social networks show roads and bridges submerged under wateras emergency crews tried to rescue people trapped in partially submerged vehicles under rising waters.

Major flooding is taking place in Windsor, in western Sydney, which would be the third and most severe flood this year, according to the weather bureau. Nigel Myron, a Windsor resident said he has prepared and kept an inflatable boat ready at all times in case he needs to evacuate in an emergency, although it is looking to return to its place once the waters recede. “At the end of the day, what can you do? It is what it is and we dusted off the ashes and rebuilt after the floods have come and gone,” Myron told ABC television.

Federal Treasurer Jim Chalmers warned that the economic impact of the flooding “will be substantial.”

It is very possible that the floods have inundated multiple food-producing regions, so supplies and prices could be affected, in the case of supplies, these would decrease and prices would increase. This would put further pressure on household budgets, which are already reeling from rising vegetable and fruit prices, Chalmers said. “There’s no use tiptoeing around that…that inflation problem that we have in our economy is going to get worse before it gets better. It has many sources but this (flood) will be one of them,” Chalmers told Sky News.

The Insurance Council of Australia, which declared the flooding a ‘significant event’, urged affected people to apply for claims.though the full extent of the damage is now unknown.