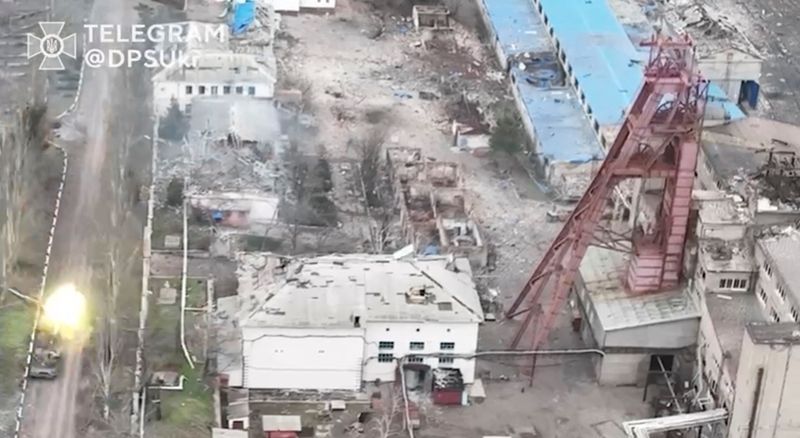 The temperature in the Ukrainian steppe of the Donbas will not rise this week from the nine degrees below zero. Those who fight around the small mining town of solder they get the best of it. There, the soldiers of both sides protect themselves in the endless passageways of the salt mines. Table salt for both Russians and Ukrainians had been mined here since the end of the 19th century, when it was the territory of the Russian Empire. Now, it is desert above with what was a city of 10,000 inhabitants devastated and below, where the enormous vaults carved in salt barely light up when a grenade is fired or explodes.

The Ukrainian soldiers who are on the other side, on the way to Bakhmut, which was a larger city, with about 70,000 inhabitants, are more exposed, both to the shelling of Russian artillery and to the hostility of the climate. In two weeks, everything will be a huge highway of ice through which only tanks and some transport cars with caterpillars will be able to circulate and with difficulty. The rest will have to wait until everything starts to turn into mud and water towards the end of March.

Soledar has no strategic importance in this warbeyond that its control opens the way to Bakhmutabout 18 kilometers away, and this is not decisive either unless it is taken into account that it could lead the Russian forces towards Kramatorsk, a major industrial and administrative center in Donetsk Oblast, which remains under the control of the kyiv government. However, there the Russians deployed what appears to be their most motivated group of fighters, the Wagner Group mercenaries organized by the oligarch friend of Vladimir Putin, Yevgeny Prigozhin. From the front lines there is talk of some of the fiercest battles since the invasion began. The casualties are heavy on both sides. On the Ukrainian side, caravans of ambulances and trucks full of corpses are seen leaving every afternoon.

Keep in mind that Putin is going from bad to worse with his invasion and desperately needs to show some triumph even if it’s minor. His troops have been losing ground steadily since September. Two weeks ago, a mistake by their commanders ended the lives of dozens and dozens of young recruits (between 89 and 400) who were mistakenly on the front line. And this Wednesday he had to remove the general Sergei Surovikinknown as the “bloody dog” of the Kremlin for his cruelty in Syria and Chechnya, as head of the invading forces. He replaced him with the current chief of the Russian Army General Staff, Valery Gerasimov. As always, nobody explains anything from the Kremlin. But, apparently, the tragedy of the cadets would have been decisive. Now, Surovikin will have to explain his decisions to Gerasimov and put up with the fact that Prigozhin tells Putin stories and that the oligarch continues to manage himself almost independently with his 40,000 mercenaries, including the 20,000 that he took out of Russian prisons and to whom he promised commutation of their sentences in exchange for fighting in Ukraine. In this context, Putin needs a victory, if only the conquest of this patch of leaky land, so that he can show that he still has the strength to fight on when the spring thaws.

In Moscow, the version circulates that Prigozhin has a particular interest for declaring his troops of convicts and mercenaries victorious so that he could later demand from his friend Putin the possibility of keeping the exploitation of the mines in the area, which go far beyond salt and where there are “rare” minerals that are used in chips, batteries and other advanced technologies. And to achieve it, obviously, it has no limits. Vladimir Osechkinfrom the website gulagu.net and an activist from the opposition to Putin reported that according to his sources, only 15% of the prisoners recruited by Prigozhin in the last mobilization would have managed to survive the fighting. According to Osechkin, these criminals are sent to the front without proper training or equipment and they are shot from the rear if they try to surrender to the enemy. This explains the stories that have appeared in recent days about the savagery of the Russians in the fighting.

In Soledar there are 559 civilians trapped among the ruins of houses in the countryside, among them 15 boys. Donetsk Region Governor Pavlo Kirilenko said they had been offered to evacuate before the fighting started, but at the time they believed they felt safe being away from the city center. It is believed that are sheltered in some of the vaults and passageways of the salt mines and that they have enough food there from the reserves that the miners left behind.

Before the war, the salt pans not only supplied the supply to the whole of Ukraine, they were also a tourist attraction. There were guided tours underground, 200 or 300 meters deep. It is estimated that there are about 300 kilometers of underground tunnels. In the depths there is a museum, a church, a concert hall for symphonic music, a soccer field, sculptures made of salt crystals and a sanatorium for respiratory diseases with a capacity for 100 patients. The Russians may have used their facilities to house the hundreds of wounded they have.

Since Wednesday there have been statements in which both parties claim to be in control of Soledar. This Saturday, the russians claimed they had conquered the city. Before, it was Prigozhin who congratulated himself from Moscow on the victory of his mercenaries. They immediately denied it from Kyiv and then the Russian army had to admit that the situation was not yet defined. President Volodymyr Zelensky met on Thursday with the General Staff of his armed forces and later said in a post on his account Telegram that the units defending Bakhmut and Soledar are being supplied with “ammunition and everything necessary” in a “prompt and uninterrupted” manner, an indication that the fighting continues despite the fact that commanders at the front admit that the situation was “very difficult”.

The Institute for the Study of War (ISW)the Washington think tank, said in an analysis Friday that geotagged images indicated that Moscow forces “probably control most, if not all, of Soledar,” but called the capture “at best, a Russian Pyrrhic tactical victory” after Moscow had committed significant resources. He added that the battle will have contributed to “degrading the combat power of the Russian forces and accumulated exhaustion.”

The cold, the snow and the ice They assumed that, by this time of year, ten and a half months after the Russian invasion, everything could remain in a parenthesis of silence until the water turns that region to mud. But this time, in kyiv they believe that this winter can give them a chance against the demoralized Russian troops and the arrogance of the Wagner assassins. are the tanks Abrams M1A1 Americans and the leopard Germans who have already been committed by NATO and who could begin arriving in Ukraine next week, when Poland advances the transfer of a unit of main battle tanks that it received last year from Berlin.