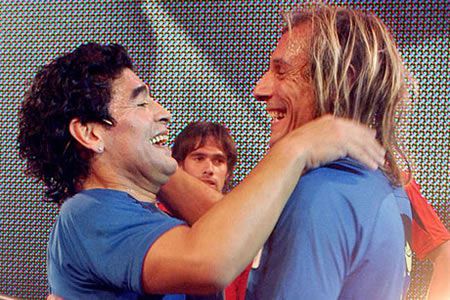 Claudio Caniggia was crossed live with him Turkish Maradona, Diego’s younger brother, with whom he shared his time as a youth in the Argentine national team. From Italy, the member of the dynasty was interviewed by Christian martin in the program F90 from ESPN. And at the time of the presentation, the former striker recalled an old episode with the journalist, with whom he almost fought.

“I know Christian well too. We had an argument once, but I’m not going to fight that animal. “, was the preamble to Cani, who tried to avoid giving details of that fact since the idea was to honor Diego. But from the study they opened the way for the anecdote and he launched himself.

Actually, the first person who gave details was the former rugby player: “I called him in Marbella to fix a note and then he didn’t show up. He appeared with the stories of ‘my house was robbed in Miami, I’m in Madrid, coming back from Tokyo, going to Amsterdam’ … I grabbed the map and didn’t understand anything. You misunderstood you, fat man, he told me ”. And there came the release, laughing and ironically, from Caniggia: “He misunderstood. He sent me a couple of racy audios. But I rushed it over the phone, huh. I told him that we were going to see each other and we met later. If I rushed it later? No, no, we had already arranged by phone “. Martin closed that chapter: “Everything is arranged with CaniWe ate 10 roasts later ”.

Of course, how could it be otherwise, one of the best friends Maradona had on a team also dedicated words to the national star. First he remembered: Turkish He was the first Maradona I met, at the Odesur Games in Chile. When I met Diego in my first match with the National Team, in Switzerland, he told me that he already knew me because his brother had told him a lot about me ”. Hugo confirmed it and replied: “Cani as a person is bigger than as a player.”

“Diego was an important part of my sports career. It meant a lot to me, I am 7 years younger but leadership … Diego is noble, authentic, that’s not what caught my attention because he always remained the one Fluff. He was always a type of pasture, humble, with a lot of heart, who was there, always generous for any situation. I was able to have a very good relationship with Diego and I am grateful for having shared many things with what I consider to be the greatest player in the history of football. Many good things and some bad, but most of it good ”, expressed Claudio Paul.

And he concluded: “He has left a great void. Sometimes I get to thinking, but I don’t want to dramatize. It is sad for all of us, those of us who knew him well, that he is not here, but we still have the great memory of the moments shared with him and with the other boys of the Argentine team as well. I was able to have a friendship, a trust with him … I carry it in my heart. I am excited”.