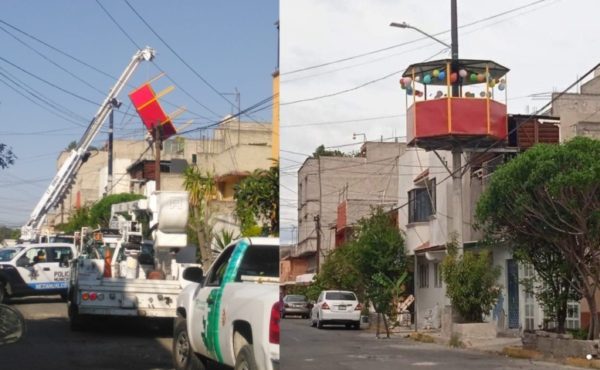 The peculiar party room was built on a pole in the municipality of Nezahualcóyotl in CDMX and was removed by the CFE due to the danger it represented.

Well they say that Mexico is one of the most unusual countries in the world due to the events that take place in different parts of the republic, which even exceed the laws of physics on some occasions, as happened in Nezahualcóyotl in Edomex, where they caught a strange construction.

According to what appears on social networks, where they captured a mini party room, which would not attract anyone’s attention if it were not for the place where it was built, since without a doubt it was something that definitely went viral on social networks .

Apparently an employee of the federal electricity commission decided to use the poles installed by the company in a different way, since in one of them he built the mini party hall, which highlighted the ingenuity of the Mexicans and that there are no limits for them.

Through Twitter, a video circulated where you can see a strange kiosk on a post located on Calle Paraguas 77 of the La Perla neighborhood of the municipality of Nezahualcóyotl, where one of the neighbors decided to build his private party room and uploaded it to the top of said post, which he secured with steel beams and decorated with balloons.

It did not take long for the fact to go viral on social networks, where the party room caused a furor and even the municipal presidency of Neza learned of the fact that it threatened the safety of passers-by, so unfortunately for the owners, the taste did not last long.