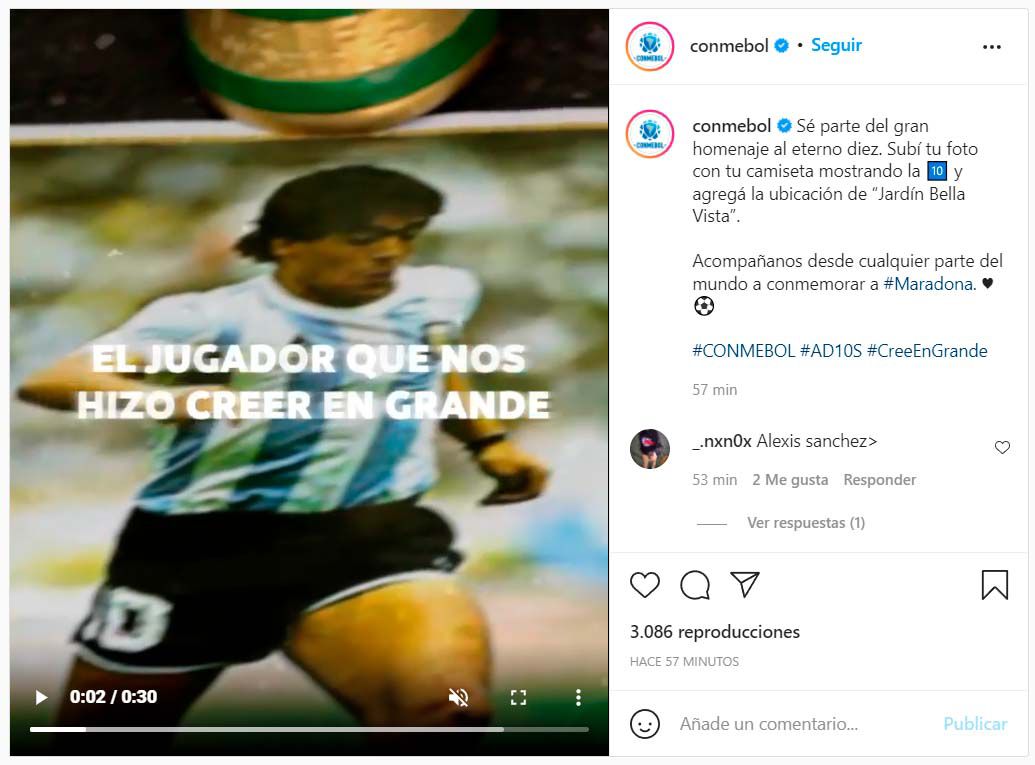 East November 25, 2021 It is one year since the saddest news received by the majority of soccer fans worldwide when that day, a few minutes after noon in Argentina, it was publicly reported the death of Diego Armando Maradona.

With the pain of his loss still on the surface and the memory of his dribbles immortalized in the memory of the fans, thousands of people and institutions wanted to pay tribute to him, including Conmebol.

The regulatory body of South American football, in addition to sharing an emotional video on their social networks remembering it, also launched a proposal for all followers on your Instagram profile.

“Be part of the great tribute to the eternal Ten. Upload your photo with your shirt showing the number 10 and add the location of ‘Jardín Bella Vista’, ”wrote the entity in charge of Paraguayan President Alejandro Domínguez, along with a video showing the steps to follow for anyone who wants to be part of it.

“The player who made us believe big deserves a big tribute. A year after his departure there are ways to feel closer. Upload your photo with the ’10’ next to the location where ‘D10S’ is located and from anywhere in the world join the tribute of the eternal Ten ”, explains the 33-second short film.

This proposal was created after Conmebol paid its own tribute to the Fluff on their social networks. The agency shared another video with images of him at the 1986 World Cup in Mexico: “We thought you had left us a World Cup, but what you left us was the union of an entire continent.”

Among the thousands of messages that are being reproduced on the Internet, one of the most heartfelt was undoubtedly that of his daughter Dalma Maradona, who on the first anniversary of his death wrote: “The world has been more horrible for a year because you are not in it… Justice is the only thing I ask ”.

At the same time, the eldest of the daughters he had with Claudia Villafañe, in addition to thanking the initiatives that were proposed to remember him, explained that will not participate in any tribute: “Many people are inviting me to different tributes that they are going to do to my dad. And I have to be very sincere and tell everyone that for me that day is the worst day of my life, that I have totally canceled it. AND What I most wish is that that day had never existed ”.

“We were not prepared”: a former colleague of Maradona starred in one of the most emotional videos to remember him

Letter to Diego, the absent friend who allowed himself to die