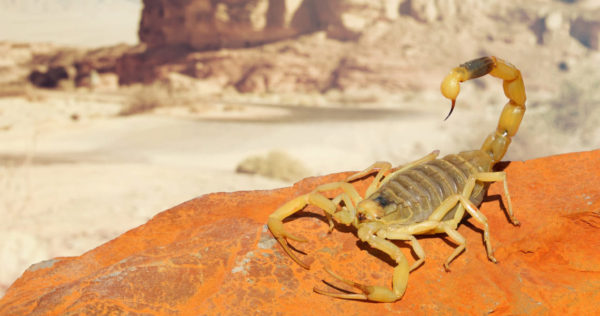 In Egypt and Australia, terror is born due to a massive outbreak of lethal scorpions and crabs, which have already killed several people.

Deadly scorpions and crabs have terrified the inhabitants of Egypt and Australia because a surprise outbreak of these animals has exploded and the worst thing is that they have already killed several human beings. It is not fiction, and many people have attributed this event to new biblical plagues, especially due to the fact that one of them is occurring in Egypt, the same place where the 10 plagues mentioned in the Bible originated.

However, in 2021 in the Egyptian city of Aswan, streets and houses were infested with highly poisonous scorpions. While there had been talk of the discovery of a giant scorpion fossil, those currently affecting Egypt can kill in less than an hour.

It is the city of Aswan in Egypt that has a complicated problem derived from the storms that have arisen in the region. These caused a massive outbreak of what is known as the Arabian Thick-tailed Scorpion, or Androctonus Crassicauda, ​​which translates from the Greek as ‘killer of men’.

At the moment it is known that some 500 people suffered bites from these insects, of which three have lost their lives, this because the scorpion venom kills in less than an hour if it is not treated in time since its poison is highly toxic .

Australia is in a panic over cannibal crabs. Yes, cannibals. Because they eat their own young, although they eat leaves, fruits, flowers and seeds, but with their recent migration these have become a problem for the country.

The millions of cannibal crabs have already caused the closure of roads and bridges, this due to the migration of this species from the forests of Isla Navidad to the beach.