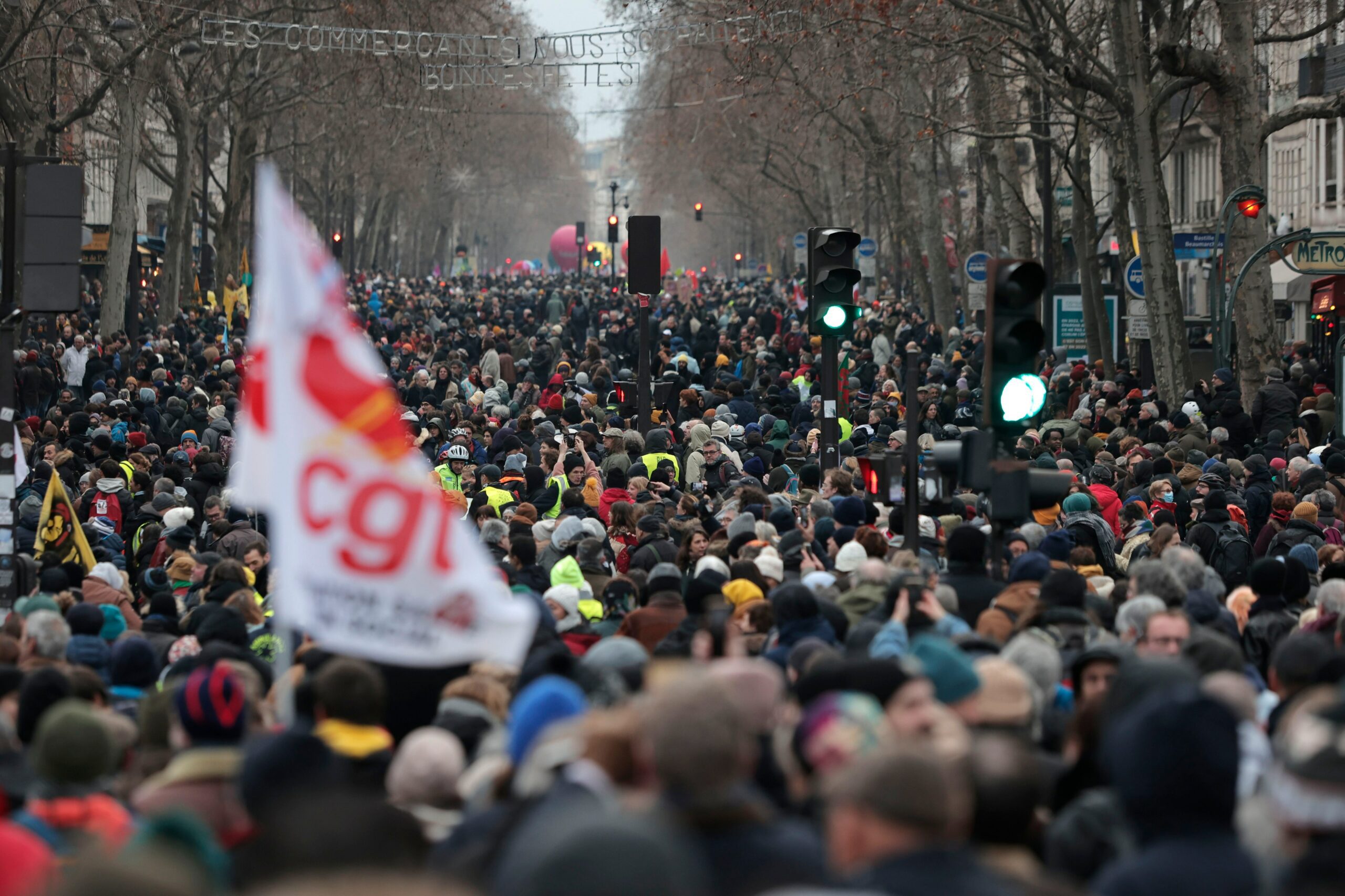 Hundreds of thousands of people protested on the streets of Paris and other French cities — more than a million across France — on Thursday amid hnational strikes against plans to raise the retirement agebut the president Emmanuel Macron insisted that he will go ahead with the proposed pension reforms.

On Thursday night, the unions announced more strikes and protests for January 31.

After the day of protests, eight trade union organizations met and issued statements announcing their own plans to try to get the government to back down.

During a press conference at a Franco-Spanish summit in Barcelona, ​​Spain, Macron said that “we must carry out this reform” to “rescue” the pension system.

“We will do it with respect, in a spirit of dialogue but also with determination and responsibility,” he added.

As Macron made his remarks, riot police pushed back projectile-throwing protesters on the sidelines of a largely peaceful march in Paris. The situation returned to normal quickly.

Under the new rules, French workers would have to work more before retiring, since the basic age for retirement will rise from 62 to 64 years. In a country with an aging population and increasing life expectancy where everyone receives a state pension, the Macron government claims that reform is the only way to keep the system solvent.

The unions allege that the pension reform endangers hard-fought rights and pThey propose a tax on the rich or that employers increase their contribution to payrolls to finance the pension system. Polls suggest that the majority of French people oppose the reform.

More than 200 marches were held across the country on Thursday, including a massive one in Paris involving all of France’s major unions.

Jean Paul Cachina, 56, a human resources worker, joined the march in the French capital — a first for him.

“I’m not here just for me,” he said. “I am here to stand up for young people and workers who do demanding jobs. I work in the construction industry sector and I am a direct witness to the suffering of the employees”.

Many young people were in the crowd in Paris, chanting “the youth are protesting. Macron, you are finished.” High school student unions had urged their members to join the protests.

Nathan Arsac, 19, a student and member of the UNEF union, said: “I’m afraid of what will happen next. We could very quickly lose our social gains. I am afraid of the future when I am older and have to retire.”.

Sylvie Béchard, a 59-year-old nurse, said she joined the march because “we health workers are physically exhausted.”

“The only thing left for us is to demonstrate and block the country’s economy,” he added.

The economic impact of the strikes is currently unknown. The government is concerned that a big show of resistance on Thursday could encourage unions to continue prolonged stoppages that could hamper the economy just as France battles inflation and tries to boost growth.

Most train services in France were canceled on Thursday, including some international connections, according to rail authority SNCF. Approximately 20% of the flights leaving the Paris Orly Airport they were canceled and airlines warned of delays.

Between 34 and 42% of teachers were on strike, depending on the school, according to the Ministry of National Education.

The French government will formally present the proposed pension law on Monday, which will reach parliament next month. Its success will depend in part on the scale and duration of the strikes and protests.

Most opposition parties, including the left and far-right, strongly oppose the plan. Macron’s centrist alliance lost its parliamentary majority last year but still retains the largest group in the National Assembly, where it stands a good chance of allying with the conservative Republicans party to pass pension reform.

The proposed changes assume that people who have worked for at least 43 years will be entitled to a full pension. Those who do not meet this requirement, such as many women who interrupted their careers to raise their children or those who studied for a long time and started working later, the retirement age will remain at 67 years.

Those who started working before the age of 20 and workers with serious health problems may retire earlier.

Macron’s previous attempt to raise the retirement age sparked mass strikes in 2019. The president eventually put his plans on hold in the wake of the coronavirus pandemic.

Retirement rules vary widely from country to country, making direct comparisons difficult. The official retirement age in the United States is now 67, and countries across Europe have raised the retirement age as the population ages and fertility rates decline.

But opponents of Macron’s reform say that, under the French system, people must generally work more years beforehand than in some neighboring countries in order to receive a full pension.

Many also see the plan as endangering the social welfare system that is central to French society.