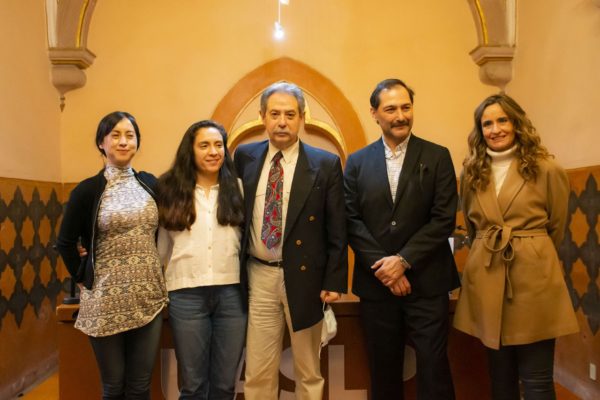 In the framework of the centenary of the birth of the poet Ramón López Velarde, the Autonomous University of San Luis Potosí, through the Division of Cultural Diffusion, the collaboration of the National Theater Company, and with the co-production of El Colegio Nacional, present the theater play “Portrait Spoken”, by the writer Juan Villoro.

The first actor and director of “Portrait Spoken”, Arturo Beristáin, spoke about this work, of which he pointed out that this libretto is given from the pen of Juan Villoro, to celebrate the 100th anniversary of the birth of the Zacatecan poet, and highlighted the fact that there are more books that talk about the work of the Zacatecan poet than his poetic work.

Regarding the plot of this staging, he explained that it is about two of the poet’s students who remain close to him out of admiration for his texts; “Where they also want to be poets, out of admiration for their art and work, in what is the fiction of Spoken Portrait, and they want to give her on the occasion of her 33rd birthday, a portrait from the Casasola photographic studio, which does not arrive to be realized by the sudden death of the poet ”.

In the same way, an extra reflection by Juan Villoro is included that also talks about these students from 1921, but also a more contemporary perspective of how their poems can be reflected now, with a current vision.

On the other hand, the first actor Arturo Beristáin pointed out that it is important that people get closer to this fundamental poet, since, at this moment, “when barbarism is gaining ground, the only way to contain it is with civilized acts. And education and art are the most refined form of culture and civilization; they are dikes to the barbarians ”.