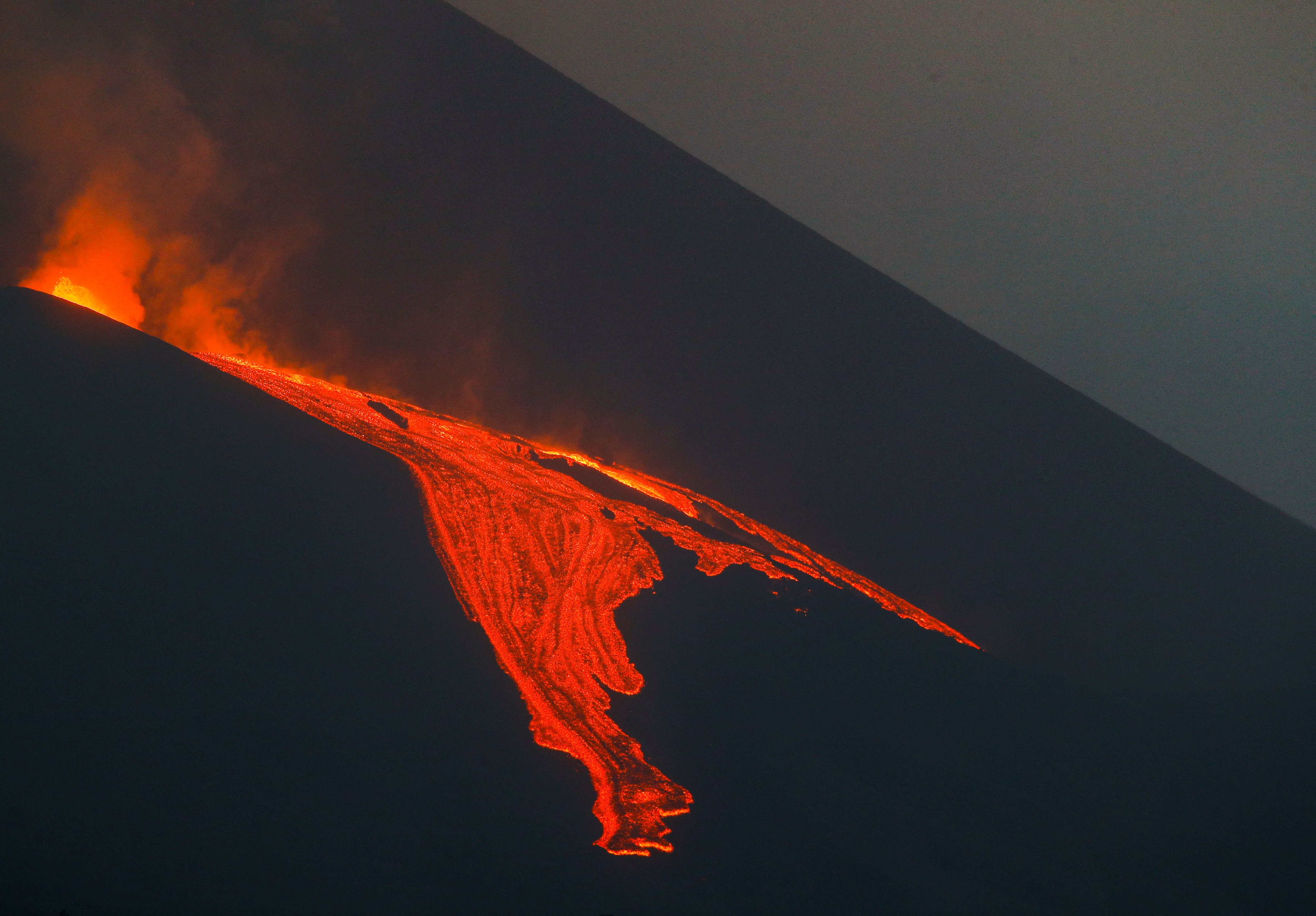 Lava flowing from the volcano on the Spanish island of La Palma on Thursday created a new lava flow that has reached a cemetery and a photovoltaic plant and that generates concern because it destroys everything in its path, in an area of ​​scattered hamlets and farmland.

The new river of molten rock It arose early this morning local and runs parallel to the tenth stream of the Cumbre Vieja volcano, which has erupted since September 19, according to the technical director of the Special Plan for Protection against Volcanic Risk of the Canary Islands (Pevolca), Miguel Ángel Morcuende.

This new laundry, he added, constitutes “a bad news ”because it runs through“ not trodden ”areas previously by lava “and is destroying what it finds in its path, has passed the Las Manchas cemetery “and has run with quite fast, although it has slowed down afterwards because it is becoming slimy.

This is a consequence of material that has dragged its way through areas of high urban concentration, and dispersed, which has slowed it down to about 25 meters per hour, very different “from the highest rate of this morning, with a lava that probably emerges from quite deep, very hot and fluid,” said Pevolca.

Given the concern generated by this new river of magma, especially as it begins to enter an area of ​​steep slope, scientists and technicians are monitoring it and today a meeting of experts to analyze their trajectory.

In addition, a increased emission rate with increased branching of lava channels and overflows and, in fact, there has been an episode of sudden increase in the emission of lava from the main effusive center “very spectacular”, although it has already ceased, a behavior that “falls within the expected” in a Strombolian eruption.

Refering to seismicity, at intermediate levels it continues to be low and the deep has decreased. The earthquake with the highest magnitude registered today, of 3.9 and felt with intensity IV, has been located 11 kilometers away.

The tremor also continues in low levels and there are no significant signs of ground deformation.

Conversely, sulfur dioxide emission remains high associated with the volcanic plume, at around 30,000 tons, but with a downward trend since September 23, when it exceeded 50,000 tons.

Regarding air quality, in the last 24 hours a high amount of gases over the areas of Las Manchas and La Bombilla, in the exclusion zone, while the situation is good or reasonably good throughout the island and regular in Los Llanos de Aridane, where the daily thresholds for suspended particles of less than 10 microns have been exceeded.

The meteorology is not accompanying and, although today heavy and persistent rainfall is recorded east of La Palma, this island of the Spanish archipelago of Las The Canary Islands will be on orange warning tomorrow due to rains that will affect the west slope, where the volcanic eruption is located.

The good news is that a change of the wind is anticipated from Saturday that will favor operations at La Palma airport.

Currently, the area affected by magma amounts to 1,084.44 hectares and the width between flows has increased to 3,350 meters.

According to the latest data update, there are 1,484 buildings affected, of which 1,195 are for residential use, 160 for agriculture and 67 for industrial use.

The damaged crops occupy an area of 340.59 hectares, of which more than half are banana trees, and exceed the 400 hectares if those affected by the ash are added, the agricultural damage is becoming worrying.