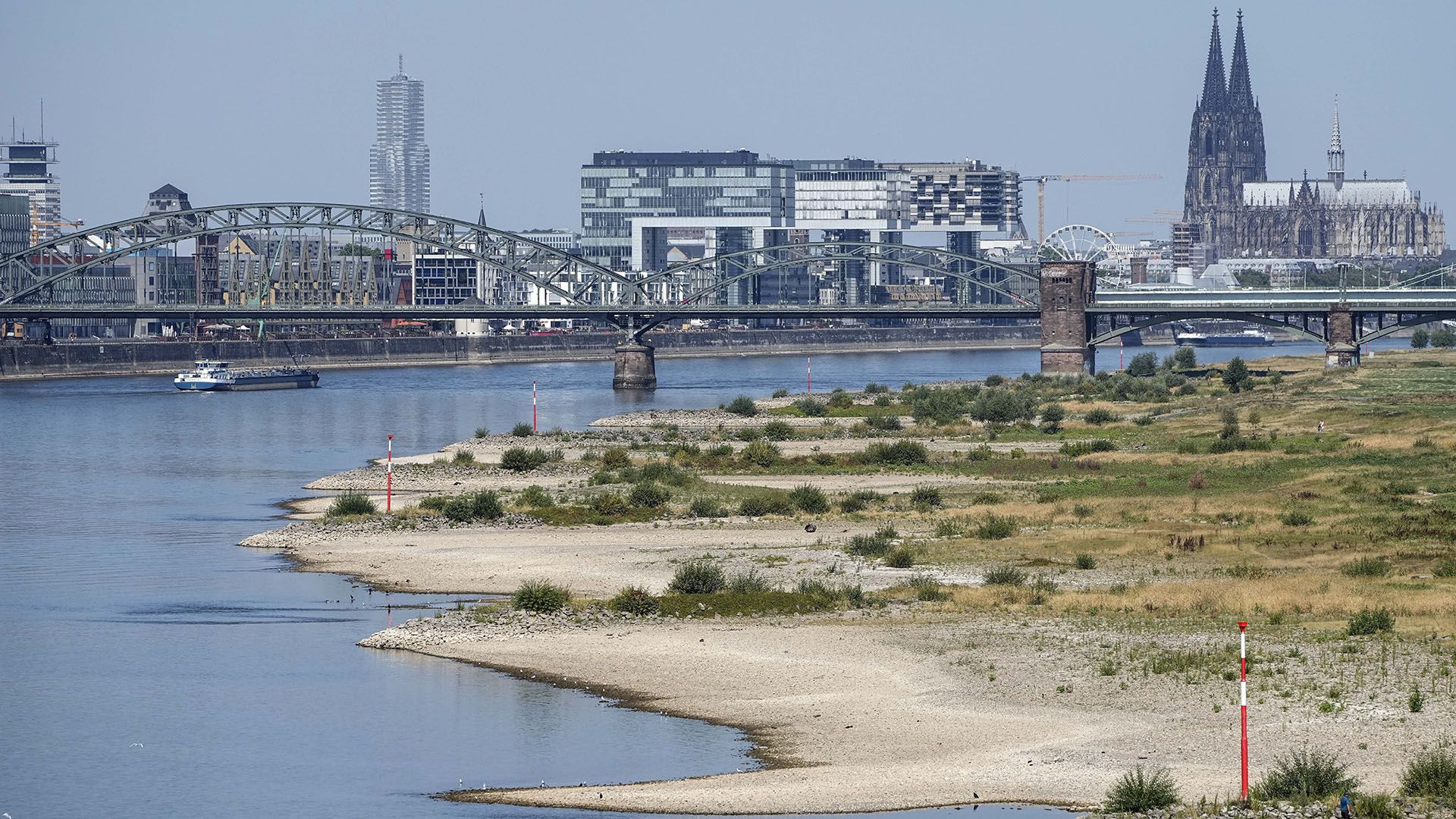 Despite the fact that the rain this Wednesday broke a period of enormous drought in most European countries, with strong storms in vast regions, in some of them with a warning for possible flooding, the lack of water in the rivers has put river transport at risk.

Although the images of the Rhine are striking due to its low level, it is not the only river in Europe that is strongly affected by weather conditions. The movement of ships through the Danube and the Po They are limited by lack of water. But also, for tourism, images such as the search of the Serbs to rescue a space of freshness in the river savaspeak of the unusual situation in the waterways.

In addition to looking for fresh water to calm temperatures that are close to, but also exceed 40 degrees, the shortage generates that freighters transport only 25% of their usual cargo there.

Some rivers, like the Danube either SignReserved in part for tourist activities, with few ships to transport goods, the Rhine, on the other hand, has led lto fall and impediment of navigation, repeating situations of stranded freighters.

But it does not have the exclusive. It is estimated that at least 100 carrier ships await their opportunity in the vicinity of the port of Suline, on the Black Sea. It also happens in the river My no, in Lugo, Spain, with a very low flow rate than usual, 340m³/s. While, in the Block, Portugal, some of its points can be crossed on foot. Until the Thamesin London, has dried up at its source.

To sail with cargo on the Danube, the second longest river in Europe, you have to do it with a turn, which has put the transport of energy ships and granaries on alert. Those who have the opportunity should do it with less load. If there is usually 2 meters of water under the boat, now there is only 40 centimeters.

According to the newspaper Romania Journal, some ships wait up to 64 days in the Black Sea. In Romania, the water level in Tulceareached 51 cm, while the minimum for safe navigation is 57 cm, according to the Danube Fairway Information Service Portal. Only cargo ships with a draft of no more than 1.20-1.30 meters are allowed to circulate in certain areas, which severely limits transit in some sections of the river.

In the Netherlands and Italy the river Po They present situations rarely seen. even the Garda, one of the largest lakes in Italy, its image is totally different, to the point of disappearing the noise of the waves hitting the shores. The Thames It doesn’t escape this picture either. Most of the UK’s aquifers are at a very low level and this is what supplies Brighton with water.

Dry, the ships are working between 25% and 30% of their capacity. For territorial management of Strasbourg navigable routes of France (VNF), only 1.05 tons of goods passed through the locks of Gambsheim (Haut-Rhin), compared to more than 1.4 tons per month that are usual. Low water levels pose logistical problems with falling tonnage of transported materials, but also increase transportation costs.

Another aspect has been the problems for the potable water supply. The recreational tourism is another hit. All this comes together in severe blows to the already complicated economy of the bloc.

The situation picture is challenging the logistics of merchandise. Companies are turning to rail options, as in France. The Port of Strasbourg (Bas-Rhin) recorded a 40% increase in rail traffic in July, indicates the economic newspaper The echoes. Information that will be confirmed with the beginning of autumn, which will have to observe the climatic behavior, Jean Marc Thomasgeneral director of the semi-public company that manages the port of Rhinenear Colmar and Neuf-Brisach (Haut-Rhin), andestimates that the activity of the port could fall in 2022 by 20 to 25% compared to what was projected.

The Danube is vital for transporting grain, oil and vegetable oils from Ukraine, already heavily affected by the Russian invasion, and a maritime trade that is slowly trying to re-establish itself. He too coal supply is delayed Y hydroelectric plants split their output due to water flows to one-third of their usual level.