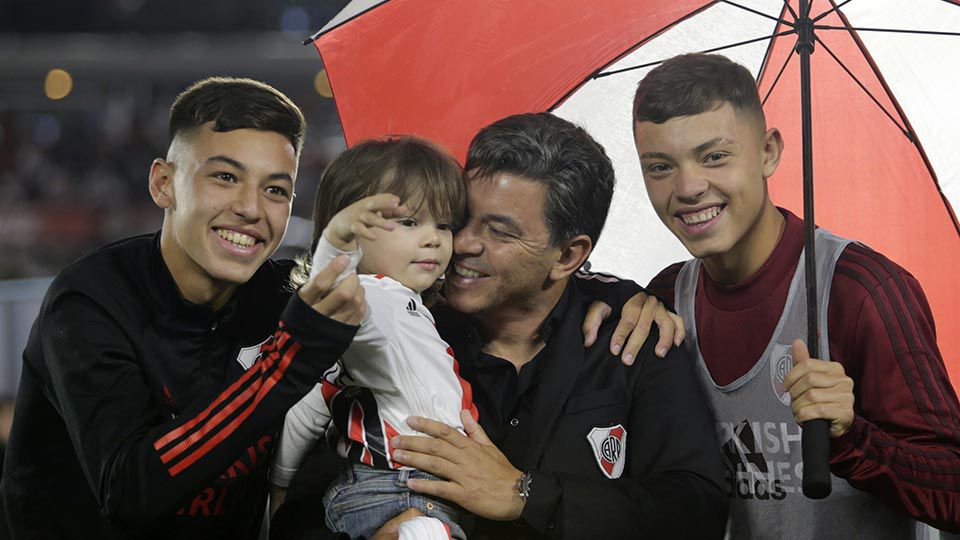 * The tender scene of Gallardo with his children

It was not one more night, not one more title for Marcelo gallardo. After climbing to the top of the podium in 12 other competitions, the Doll He was able to seize the long-awaited Professional League that he had not been able to conquer until now. The implacable win over Racing was the previous party of the Millionaire who shouted champion again in a Monumental with full capacity and the coach was able to experience the celebration in the company of three of his children.

The 45-year-old coach starred in one of the most tender scenes of the day in the middle of the game when he met Matías, Santino and Benjamin, her three youngest children. Red-eyed and holding back tears, but visibly excited for the moment, the Doll he was photographed with his descendants.

“My skin crawls at every moment, what is lived is very exciting. After such a long time, having suffered all this moment of pandemic, to meet again with all of our public with a triumph and a championship. The fans deserve it for not being able to accompany us from here in, ”was one of the statements that DT gave with emotion on the surface.

For logical reasons, the only one of Gallardo’s children who did not show up on the playing field was Nahuel, who began his professional career in the Millionaire hand in hand with his father in 2017 and currently, at 23 years old, he is on the campus of Colón de Santa Fe.

So much Matías and Santino are part of River’s youth divisions. Matías, 17, is in the fourth division and works as a creative midfielder, while Santino is a forward and is part of the eighth. Benjamin, the fourth heir to the Gallardo dynasty, was born in mid-2019.

The Doll arrived at the bench of substitutes Monumental in June 2014 and from there he built his myth: the 13 championships as DT were added to the 8 he achieved as a footballer and that allowed one of Angel Labruna in the table of titles of the most winning people with the red band.

However, it is a mystery to know if he will continue with the goal of raising more crowns after so many years of work: “I am ending my contract and it is the first time that I am in that position. I have given everything to the club until today and here you have to be with full energy. I think I deserve the possibility of rethinking myself because it takes a lot of energy”, He warned after the coronation.

Gallardo, a myth: he was one step away from being the most winner of River Plate in the historical table of titles