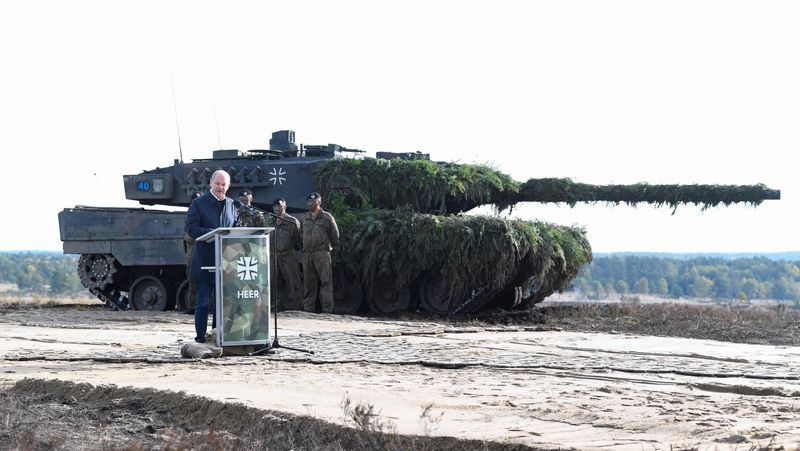 107 years have passed since the first war tank was seen in action and we are still arguing about its usefulness and effectiveness in determining the course of a war. It was September 15, 1916, as the British tried to break through the German lines during the infamous battle of the sommethe longest and bloodiest of the First World War and the worst in British history, which appeared on Mark1, the first tank in history. Since then, they have remained the stars of the battlefields despite having been vastly outclassed by high-precision missiles, kamikaze drones, or simultaneous launch batteries. And this weekend they were the center of the debate between the ministers of the NATO countries meeting in the Ramstein basein Germany.

Ukraine is desperate for more powerful tanks to try to drive the Russian invaders back into the Black Sea before they regroup when spring begins in March. Germany has them, but their government fears that if they hand them over, could cause an escalation in the war. He says he will only do it if the United States surrenders its powerful M1 Abramssomething that for now the Joe Biden government has not planned despite the fact that its military aid to Ukraine already exceeds 20,000 million dollars.

Ukraine’s highest-ranking military commander, General Valery Zaluzhnysaid that their forces need a few 300 tanks Westerners to make a difference in the battles that are taking place right now for control of cities and towns in the east of the country. Military analysts say 100 could already make a big difference. Until now, the western allies of the NATO vintage tanks and main battle tanks, including many from the Soviet era, were shipped to Ukraine. The provision of state-of-the-art tanks and main battle tanks was until now considered a red line to prevent Russia from retaliating directly against them. This changed in recent weeks when the United States, France and even Germany announced different aid packages that include modern armored fighting vehicles. british prime minister Rishi Sunak He went further and after his visit to kyiv he said that he would send a platoon of tanks challenger 2some of which would arrive in a matter of weeks.

But the urgency of the situation made all eyes fall on the Leopard 2 Germans, of which there are some 2,000 units distributed in several European countries that they could send them to the battlefields in just days. It first entered service in 1979. It has a autonomy of about 500 km and reaches a top speed of 68 km/h. It is equipped with a 120mm gun as its main armament, it also has two coaxial light machine guns. The Leopards were deployed in Kosovo, Bosnia, Afghanistan Y Syria (for Turkey). They have several advantages, they are adapted and tested on the European ice fields, they are extremely effective, they could make a real difference against Russian artillery. Ukrainian tankers could be trained in days and within a few hours of their headquarters. Even Germany would not have to send its own tanks, it would be enough to authorize their re-export to the other Eastern European countries that already have them. Poland says it will do it anywayBut we’ll have to see what the others do.

The German Chancellor, Olaf Schölz, repeat that “will not act alone” when it comes to sending arms to Ukraine, and that it will only act in concert with its allies. He is talking about Washington. He wants Biden to hand over his M1 Abrams first so he won’t be singled out as the one who allegedly angered Putin. It is also unclear whether Scholz will authorize the export of Poland Y Finland, the two countries that already said they were willing to hand over their German tanks to the Ukrainians. What Scholz asks is that there be a very accurate display of unity from the entire western coalition. But johann wadephul, deputy chairman of the Christian Democrats, Germany’s largest opposition party, said Scholz’s reluctance to send the tanks undermined his argument for seeking solidarity. “The chancellor’s refusal, and the fact that Germany does not send Leopard, are in fact ‘go for free’, ‘cut yourself’that has nothing to do with solidarity,” he said Thursday in Parliament.

In Washington they expose technical obstacles to not deliver the Abrams. This week it was announced that about 100 additional combat vehicles of the type strykers Y bradleys. Fifteen days ago another 50 of these tanks had already left. The US military argues that the M1 Abrams tanks are not suitable for fighting in eastern Ukraine. require a specific fuel, frequent maintenance, spare parts, transportation and training, where supply lines could easily be cut off. Sabrina Singh, a Pentagon spokeswoman, explained that it “just doesn’t make sense” to provide Ukraine with Abrams tanks “at this point” because use aviation fuel and are difficult to maintain.

Ukrainian President, Volodymyr Zelensky, participated in the German summit with a Zoom message from kyiv. He asked allied ministers “not to haggle over different numbers of tanks, but to open up that main supply that will stop the evil”. And he threw them one of those direct and more or less witty phrases to which he has accustomed us: “Turn the meeting into a ‘Ramstein of tanks.'”

But it failed to move the positions substantially. At the end of the summit, the German Defense Minister Boris Pistorius He announced that discussions were continuing. “We cannot yet say when and what the decision will be made regarding the Leopard tank,” he said. “There are good reasons in favor of renditions, and there are good reasons against, and in view of the whole situation of a war that has lasted almost a year now, all the pros and cons have to be weighed very carefully,” he said, without detail the reasons.

Ukraine will have to keep waiting for the decisive moment like when the M4 tank saw combat in North Africa with the British Army at the Second Battle of El Alamein in late 1942. There the advantage of Allied armor over Axis armor was tested and proved superior to the lighter German and Italian tank designs. It was when the US army understood that the M4 would be decisive in winning the war and began to manufacture and export it in record time.