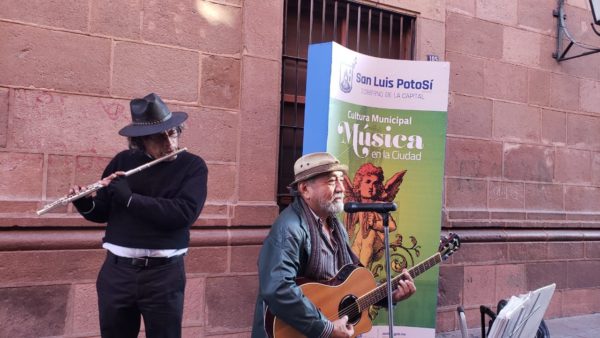 As part of the Day of Santa Cecilia, patron saint of musicians, the Municipal Culture Directorate organized a music meeting in different parts of the Historic Center.

Potosinos and visitors to the Historic Center this Sunday afternoon witnessed the celebration of the Musician’s Day that the Government of the Capital prepared, placing musicians of different genres at different points to commemorate with music.

Located in the central streets of the city, 16 musicians, both soloists or in groups, showed their musical gifts in different genres such as opera, ballad, rock in Spanish, romantic, urban rock, Andean music, ranchera, for all kinds of tastes, an event organized by the Municipal Culture Directorate.

Daniel García Álvarez de La Llera, Director of Municipal Culture, indicated that within the framework of the Day of Santa Cecilia, patron saint of musicians, the date was not wanted to go unnoticed and a musical meeting was organized, in which it could be celebrated by performing music.

From 4 in the afternoon to 8 at night, the Historic Center was filled with indistinct music in the Plaza de Los Fundadores, Hidalgo Street, Zaragoza Street, Plaza del Carmen, Municipal Palace arcade, Colón Garden and Garden of San Juan de Dios.