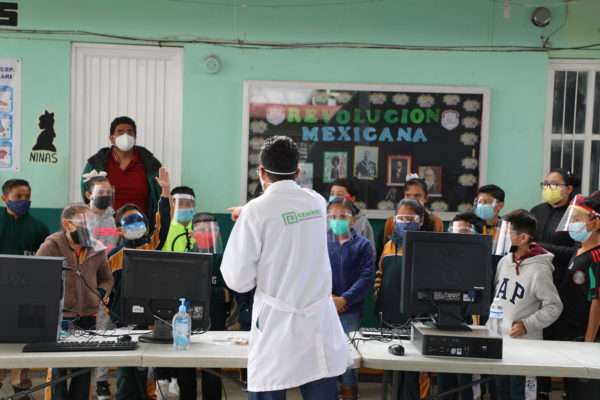 The Labyrinth Museum of Sciences and Arts started in the primary school, Margarita Maza de Juárez, in Soledad de Graciano Sánchez, the project “Itinerant Labyrinth”, which will serve to address the public policies implemented by the Government of Ricardo Gallardo Cardona , of inclusion and approach of art, science and culture to the 58 municipalities of the State.

Governor Gallardo Cardona has expressed the commitment to reach all Potosinos with state programs, that is why the Labyrinth Museum of Sciences and Arts, opens its doors but also brings its activities to children from all over the world. State to provide a space for learning and knowledge in all its branches.

“Just as we receive our visitors in the museum, with that same delivery we will reach every corner of San Luis Potosí, we are going to visit the 58 municipalities,” said the general director of the Laberinto de las Ciencias y las Artes Museum, Marcela González Herrera .

The activities that take place in the “Itinerant Labyrinth” are some of the most representative of the Museum, such as: “The Tesla Coil”, “The Black Hole”, “The Robot from Mars”, “Digital Planetarium”, Microscopes, and workshops focused on the target area of ​​the project.

On day one in Soledad de Graciano Sánchez, González Herrera was accompanied by the director of Municipal Tourism, Aurora Mancilla Castro and the director of Municipal Education Juan José Castro Castillo.
During this 2021, the agenda of the “Itinerant Labyrinth” includes municipalities such as Matehuala, Cedral and the State Center for Social Reintegration (Cereso) La Pila.