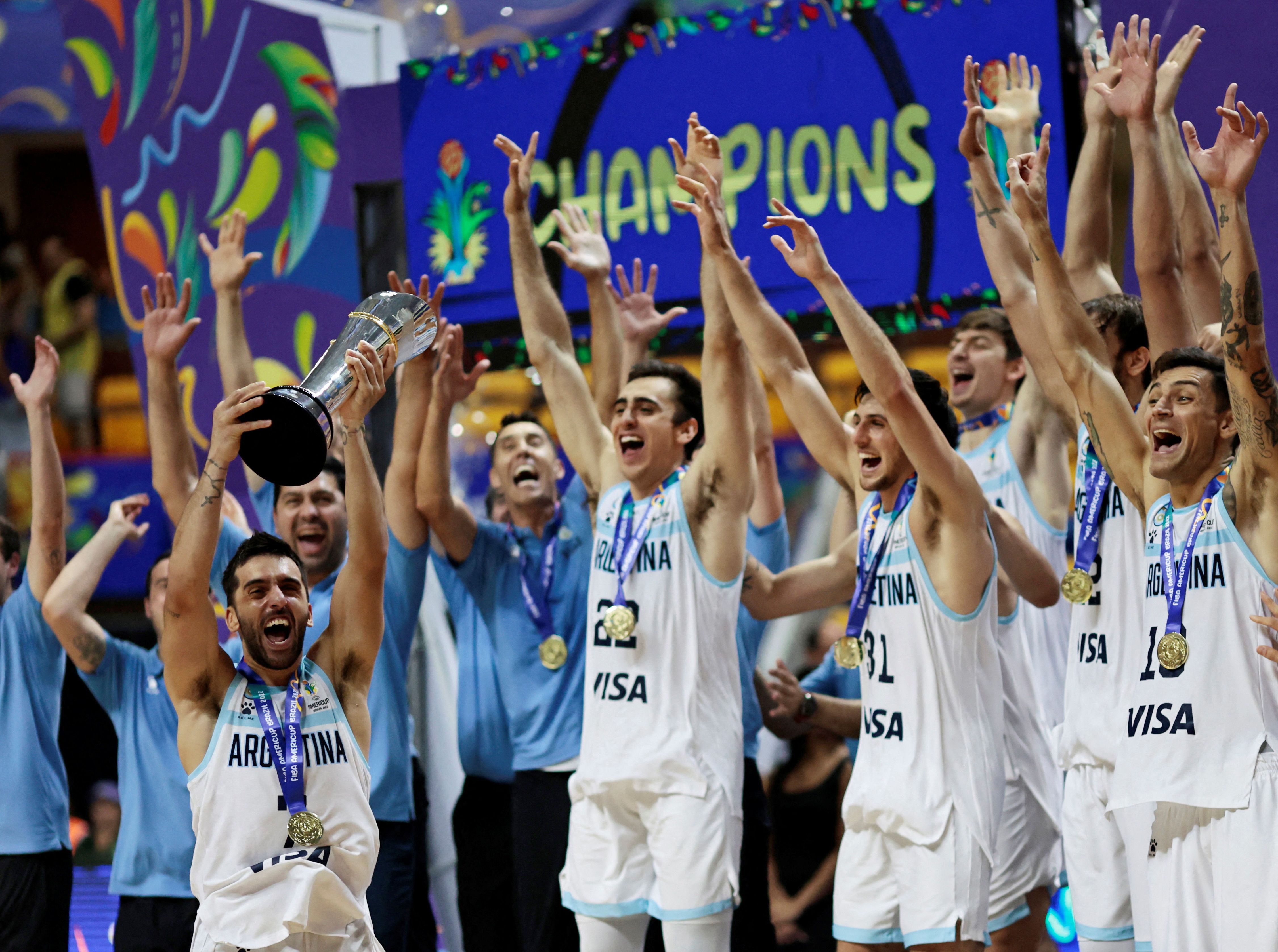 The Argentine basketball team won the AmeriCup title (Copa América) of the discipline, by narrowly defeating local Brazil, by 75-73, in the final played in the city of Recife. At the Geraldao Arena stadium in the capital of the state of Pernambuco, the team led by newcomer DT, Pablo Prigioni, won a harrowing victory, with a performance that showed two different faces.

The Santiago forward Gabriel Deck (Real Madrid) became the main scoring path, contributing 20 goals (3-7 in doubles, 3-5 in triples, 5-6 in free kicks), 7 rebounds, an assist and a steal in 32 minutes. In addition to converting the last double of the game, the former San Lorenzo player captured a key rebound, when the match expired, after a failed triple by Lucas Días, with 1s to go. 4/10 for closing. Facundo Campazzo was also decisive in the coronation, as was the case throughout the tournament. The Cordovan delivered a masterful assist, which served to tie the match 73-73 at 1’19” at the end of the match.

“Being champion is always different from everything”, were the first words of Facu seconds from the end of the match. Totally euphoric, where he “stole” journalist José Montesano’s glasses, Campazzo continued analyzing the final. “Being champion is always a different pleasure, and even more so with this shirt, whoever it is with. We take it with the seriousness it deserves. We have been working for a long time, we were hard and firm at the time we had to be, it was complicated at times, but we knew how to cope. On a difficult court, with top level players that is Brazil”.

“We work a lot, we come from August 4, many things in between. Happy because we sacrificed a lot, coming to the National Team is the most beautiful thing there is. This also goes for Néstor ”, in relation to Che García, who was fired days before the tournament began and Pablo Prigioni took his place. “Winning here is priceless. Where we are, the rival… but we care about ourselves. This is going to motivate us to keep coming back,” he added.

At one point during the relaxed chat with TyC Sports, Campazzo was encouraged to sing a song by Q’ Lokura, one of the current tanning bands in Córdoba. “Then I’m going to post it online to the selection playlist link prior to the game to see if people like it, there’s a variety, don’t expect AC-DC to appear and stuff,” he joked until he ended up singing with pure euphoria.

At the start, the Argentine team showed authority to defend rudely and execute definitions from long distance to take advantage on the board. Thus, by the middle of the first quarter, Prigioni’s team was ahead 14-4, with an acceptable percentage in triples (57 percent, 4-7). The visiting quintet continued betting on fluidity in circulation, but basically closed the roads so that the Brazilian attack could be effective. Thus, Deck’s aim (he played with a sore right adductor) and Bolmaro’s contribution from the bench (4 points) allowed Argentina to go into the first break with an appreciable lead: 26-14.

In the second quarter, Brazil rehearsed a glimpse of reaction with the entry of shooting guard Vitor Benite (7), although -immediately- the Rio de la Plata team corrected and adjusted details on their own board to widen the figures: 40-25, with 5m remaining. 09s. In the final stretch of the chapter, the local team improved its production thanks to Marcelinho Huertas (8), although not enough to get within range of the scoreboard. Argentina finished 10 units up (48-38), at the end of the first half.

At the beginning of the third period, Brazil took advantage of a burst by Vitor Benite (8) to cut back and get back into the match, in just 2m. (48-51). Argentina entered in a brief period of confusion, with losses and drought, which caused the match to be more even and balanced. With 2m.57s to go, the scoreline continued to favor those led by Prigioni (58-55).

The albiceleste team stayed ahead, thanks to conversions by Laprovíttola (7) and some good defenses by Bolmaro. An error by point guard Yago Santos, who missed a very simple conversion, prevented the locals from being close on the scoreboard and, in return, two free kicks made by Vaulet allowed them to establish an appreciable difference (67-60) to enter the last quarter.

In the 10m. finals, the lack of efficiency was accentuated for the Argentine team. To such an extent that, during the first 4 minutes, Prigioni’s team did not convert (0-4 in triples) and Brazil, with some appearances by Dias, was up on the board (70-69), with 3m remaining. 21s. In the decisive stretch, both teams made a mistake and rushed the penetrations to the rim, even in uncomfortable situations. But Argentina defended better and took the major trophy, after accrediting six wins in the same number of presentations.

A hint for Marcelo Gallardo and the premonition of the Boca Juniors squad: 10 phrases from Riquelme after the win against River Plate

Esteban Bullrich’s message after River Plate’s defeat in the Superclásico: “This bank account to the greatest since intensive care”

With information from Telam.