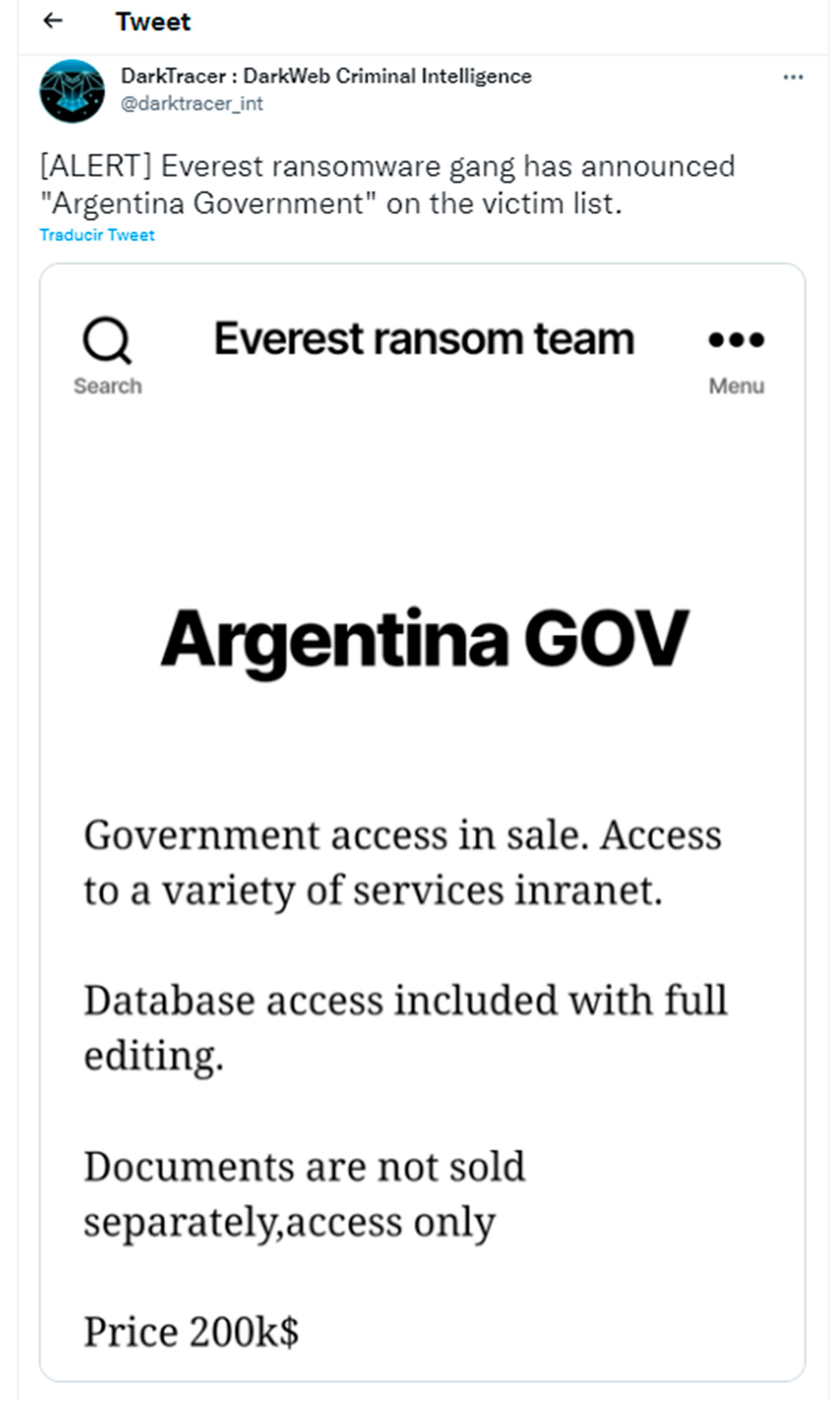 A group of hackers assures that they accessed official documents of the Argentine government and offers access to them in exchange for 200 thousand dollars.

Through the Twitter account ‘DarkTracer: Darkweb Criminal Intelligence‘, usually specialized in publishing alerts about hacker movements on the Deep Web, it was announced that an official database from Argentina was put up for sale in a forum. The most alarming element of the attack is that the alleged cybercriminals not only offer to access public data, but also to edit it.

As is often the case in these cases, the identity of the authors of the offer is unknown. They identify themselves as members of the group ‘Everest Ransomware gang’, which has already made the news this week because after announcing a similar attack to the Ministry of Economy and Finance of Peru, offering access to related databases for 100,000 dollars.

Official sources consulted by Infobae They assured that they are analyzing if the threat is real.

What does ‘ransomware’ mean and why is it so dangerous?

Felipe Gómez, Director of Security, Data Center and Lumen Technologies expert explained that ransomware is one of the predominant cyber threats in terms of security, which although it can affect any computer on the network, it has been exploited by groups of Cybercriminals to attack large organizations.

A ransomware is a type of virus or malware that is sent through spam and other methods, this tactic is intended to trick the user into clicking on malicious links that end up facilitating the access of these cyber attacks, usually these Hacker groups hijack or lock files or entire systems, preventing the user from accessing them.

“Ransomware is a hijacker. It uses encryption, holding files and systems hostage. In theory, when the victim pays the ransom amount, they receive the decryption key, releasing the locked files or systems, ”said Gómez.

According to a report by the antivirus company Kaspersky, between 2019 and 2020, the number of companies that suffered a targeted ransomware attack attempt increased by 767%

According to Felipe Gómez, these attacks are not perpetrated by criminal gangs; the current panorama is made up of many groups, each one specialized in a specific function.

Visual puzzle: where are the four young people smoking? You have fifteen seconds to find them

Gmail: what’s new in the new widget for Android?