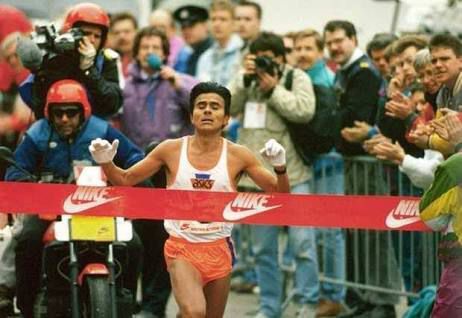 Long distance and middle distance runners are, perhaps, one of the glorious athletes who they have had less recognition in Mexican sports. In 1991, the country received the news of having won the New York Marathon for the first time. The feat was carried out by Salvador Garcia Melchor, the native of Tingüindín, Michoacán, who caused a fleeting stir in the territory, but years after having achieved the glory and recognition of the controversial Carlos Salinas de Gortari, he stepped in jail and ended up selling ointments.

The chapter that the Hawk García had to live to give a radical turn to his life that happened in the Big Apple. The private soldier of the Mexican army fixed his hope on win the prestigious New York race for 1991, because a year before it was made of the second site. It was thus that, with an official time of two hours, nine minutes and 28 seconds, the long-distance runner conquered the top of the podium and became the first Mexican-born to write his name in gold letters.

Fame and recognition was not long in coming. In the first instance, after his triumph, it became creditor to a stratospheric sum of money and a BMW brand car for winning first place. The large amount of money that he obtained, in the first instance, was well spent. He bought a house in El Ocotal, near the Desierto de los Leones, whose façade features a ambitious castle, although their acquisitions were not limited to that.

His vision and desire to progress led him to acquire a 2,000 square meter piece of land in Michoacán, another where he built a party hall, as well as a couple of businesses with ice cream parlors and pizzeria in the country’s capital. All this, as well as his status as a high-performance athlete, placed him as one of the sports personalities favorites to win a medal on the Olympic podium in Barcelona in 1992.

The honors were not limited to the financial aspect. He was named the best athlete of the year in which he conquered the glory. In the army, his sporting merit led him to be promoted to the rank of sergeant, although he also won the admiration of the former president Carlos Salinas de Gortari. In fact, the then president ordered that, upon his arrival from New York, The presidential guard will escort him to the gates of Los Pinos, which was then the official residence, to congratulate him personally.

However, the picture quickly faded. Its decline began in Barcelona 1992, when it explicitly declared its admiration for Saddam Hussein and Adolf Hitler, as well as the confession where he assured his need to have sex before each competition to improve his potential on the asphalt. With the controversy on his shoulders, he was discharged as a military member, left the ranks of the Institutional Revolution Party (PRI) and failed in the Olympics. His path, apparently, continued to defend the rights of Mexican athletes.

His stubborn personality placed him as the enemy number one of Mario Vázquez Raña who, due to the attacks he received when he was in charge of the Mexican Olympic Committee (COM), initiated some lawsuits against the Hawk for alleged defamation and equity damage of more than MXN 10 million to the CDOM. The signs led him to step on the North Prison twice, from where he had to sell some of your properties to pay for your legal defense, although in the end his innocence was proven.

Years later, in an interview for The DayHe assured that he always considered himself a social fighter. “That is why I consider myself a political prisoner, because I attacked and I told Mario Vázquez his truths and his henchmen, of being a dictator of sport. I was never afraid of him, I went on hunger strikes and even closed the Mexican Olympic Sports Center (CDOM) to face him peacefully, but no athlete listened to me”.

Thus, after winning the marathons of Houston, New Jersey, Mexico City, Rotterdam and New YorkWith broken shoes and long hair, he was forced to sell miracle pomades to survive. As he declared to the media, with the business he was looking for a MXN 200 minimum profit to eat, in 2005.

The collapse of “Púas” Olivares: the boxing champion who sold his trophies in La Lagunilla

He dodged death seven times, touched glory in boxing and ended up in jail: the tragic story of Gato González

He was world boxing champion and ended up in misery: the cruel story of Mantequilla Naples