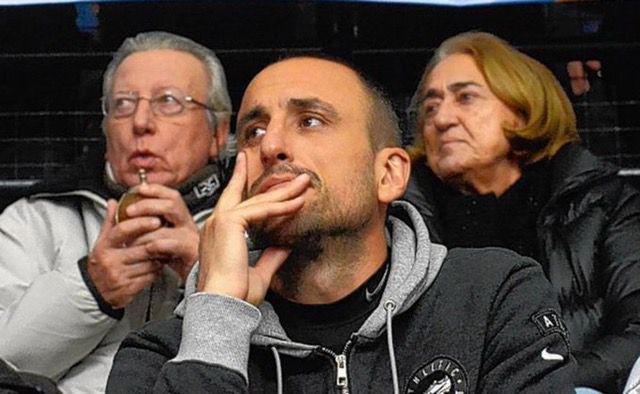 “Potato…”. Manu Ginobili can barely finish the word. He says it loud, thinking that she can continue, but inside something begins to break…

There is silence in the auditorium until people realize what is happening and yell at him “let’s go Manu”.

That gives him time: to swallow hard, lean back a little on the lectern and thus try to complete what he wants to say about his beloved father…

“How I would have liked you to be here… And you could understand what is happening today… My first faithful and biggest follower…”.

As he can, with a broken voice and more desire to cry than he allows himself, the Argentine crack finishes his thanks.

It is, by far, the most emotional and hardest moment of the night in which he entered the Basketball Hall of Fame. Ginobili tries not to look ahead, because he knows he won’t see him in the audience. It is one of those nights in which one wants to enjoy with everyone, with each and every one of those who helped you along the way, Manu cannot and the perfect night ceases to be.

Manu knows it and the Ginobilis know it, those in Springfield and those in Bahía Blanca…

We knew that this would be the breaking point for Manu. Because the figure of Jorge, Yuyo for friends and the entire basketball environment, is too strong. For Manu and for everyone in the family. Jorge Ginóbili has always been the leader, from the look, with actions more than with words. Jorge is determination personified. And, above all, the passion for basketball. He is, ultimately, everything that Manu is. Much of what Manu has is what he inherited from Yuyo. Former player of Deportivo Norte and first president of Bahiense del Norte when it merged with Bahiense Juniors, in 1975, the father is the summary of the fanaticism for this sport in the Capital of Basketball.

An absolute lover who, as Huevo Sánchez, coach and family friend, says, prefers to make a burger to the cadet B strip at his club than to watch Lakers-Spurs despite the fact that his famous son is present in one of the most famous stadiums of the world. The neighborhood club is his passion and from there Manu absorbed it, like so many others… That’s why he, precisely him, wasn’t there last night was a dagger in the hearts of those of us who knew. Because Manu needed and justice needed a story. Because no one would have wanted to be in Springfield more than Yuyo. Raquel, the mother, was not there either, but her case is different. She basically didn’t travel because she is so loyal to her husband that she wouldn’t be there if he wasn’t. It is even an understandable absence. These things she doesn’t move the needle or, in fact, she doesn’t like essentially. We are talking about a mother who was always there, from her place, not in the games, who made him nervous because she feared that “they would hurt my baby.” But Yuyo would have loved to be. And that hits Manu, as he happens to all of us who are sons. And besides, he goes further. Because, if he wasn’t around and could at least realize where his beloved son was, it was tolerable. But even that is not possible. And hurts.

There are too cruel diseases that come to quench passionate personalities. It’s horrible, but you have to accept it. Such is life, never perfect. Manu knows it, although he would have loved Yuyo’s knowing look, smile and hug. We all loved him, we all expected him and all of us who have witnessed this story of love and passion, he hurt us. That was only missing in one night for the history of Argentine sports. What a pity. But Manu and we all know that Yuyo is here and that, without him, nothing would have been possible. He is not much and it is unfair, but he is a nice comfort. #thanksyuyo