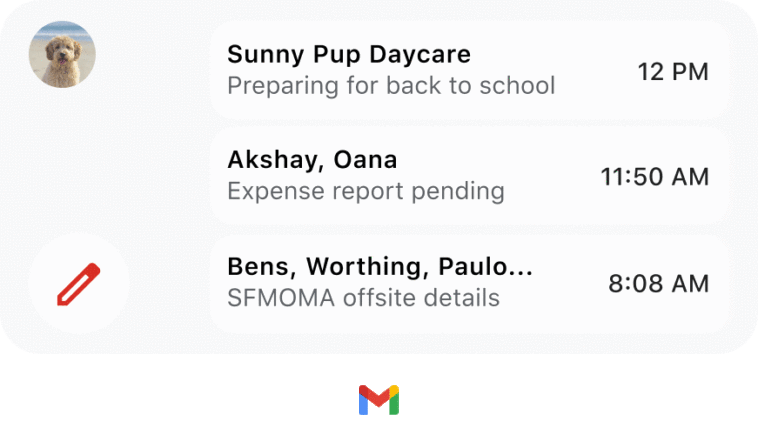 When the first version of the Gmail widget was released, users could find that it was not particularly useful. In fact, it only provided links to different application screens, such as the inbox and the email editor. It basically didn’t show a lot of important information about the emails you had received, nor did it tell you how many were not read in your inbox.

Part of the old widget’s lack of functionality was due to Apple‘s limitations. Before it was not allowed to integrate interactivity in your widget and any user contact had to be managed by starting the application.

These rules have finally changed, as the update has introduced new functions that you can see below.

The Gmail smartphone app introduces an enhancement for users of mobile devices running iOS. With this update, users will be able to check their inbox without having to log into the Gmail application, accessing details that were previously unavailable.

The “widget” mentioned in this note was added to iOS devices in 2020, with the release of the improved version of the operating system, iOS 14. It was also the first to allow the use of these elements to customize the “home” section. of the mobile device.

According to a statement from Google on its official pages, This addition aims to help users better manage their inboxes with additional information, such as the sender who sent the message and the subject of the last received emails.

Other Google changes for smartphones

This isn’t the only improvement: Google Meet’s video calling platform has made multitasking easier to use by introducing support for the mode. “Picture in picture”, also known as PiP (Picture in Picture).

Meet update automatically triggers PiP when a participant in a Meet call leaves the app, allowing the user to view other documents or browse other applications without leaving the video conference.

Currently, the email service is considered a necessity, both for work, academic or even personal purposes. This type of “digital filing cabinet” usually stores information relevant to people’s normal lives. Reminders, letters, documents, videos, photos, newsAmong other files are those that end up staying in the post office, making this an unprecedented information bank.

Likewise, it can represent a loss of information of great magnitude. Not being able to log into your Google account, either due to blocking or theft, is undoubtedly a frustrating and somewhat catastrophic situation.

Here’s what to do to prevent this fateful moment:

There is nothing worse than losing access to your Gmail account and realizing that you do not have a backup copy of it, or that the one you have is out of date. For this reason, for this type of case it is important to be visiting the area of Setting from Google, to download a backup that includes the latest data in the mail. For this, the internet giant offers a tool known as Takeout, with which users can download their data, either from Gmail or from any other Google app.

In the case of e-mail, the information will be downloaded in MBOX format, which is used so that any mail service, be it Gmail or not, can recognize the data and thus restore it to the last copied update.

In addition to the security account, Google also offers its customers several options with which to identify themselves to the system and thus demonstrate that they are effectively the owners of the blocked / lost / stolen Gmail account.

To be able to configure this help, you just have to follow these steps:

1. Go to https://myaccount.google.com/ and locate the option Security; click on it.

2. At the bottom there will be a tool called “Methods to verify your identity”.

3. Inside, you can indicate different options with which to verify your identity before Google, such as a phone number, alternate email address, or security question.

Four. Fill in each of these spaces if they were empty or update them with information that you know you will remember in case you lose control of your account.