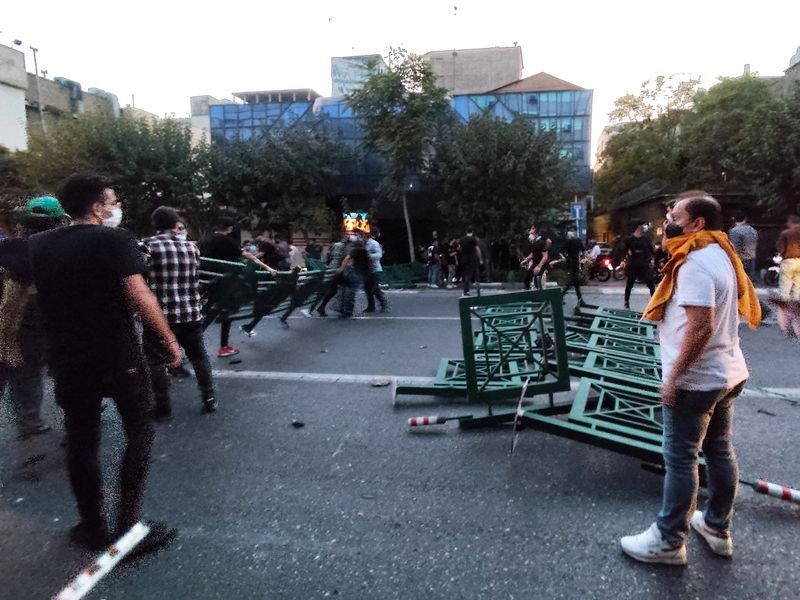 Protesters in Tehran and other Iranian cities police stations and police vehicles burned Thursday as public outrage over the death continues unabated, with reports of attacks on security forces.

Mahsa Amini, 22, died last week after being arrested in Tehran for carrying “improper clothing” She fell into a coma while in detention and authorities have said they will launch an investigation into the cause of her death. In a statement, the Revolutionary Guard expressed its solidarity with Amini’s family and relatives, but launched a threat to the media that seeks to block the information.

“We have asked the judiciary to identify those who spread false news and rumors on social networks and on the street and who endanger the psychological safety of society and to deal with them decisively,” said the Guard, which cracked down on protests in the past. For its part, the Ebrahim Raisi regime is trying to retake the initiative and called for pro-government demonstrations for Friday.

“The will of the Iranian people is this: do not forgive criminals,” said an editorial in the influential hardline newspaper Kayhan. The Protests over Amini’s death are the largest in the Islamic Republic since 2019. Most have been concentrated in northwestern Iran, populated by Kurds, but have spread to the capital and to at least 50 cities and towns across the country, and the Police use force to disperse protesters.

A member of an Iranian pro-government paramilitary organization, the Basij, was stabbed to death in the northeastern city of Mashhad on Wednesday, two semi-official Iranian news agencies reported Thursday. Reports from the Tasnim and Fars news agencies about the stabbing appeared on Telegram as their websites were down on Thursday. There was no official confirmation of death.

Tasnim also said another Basij member died on Wednesday in the city of Qazvin as a result of a gunshot wound inflicted by “protesters and violent groups,” bringing the total reported number of security force members killed in the area to four. the riots.

In the Northeast, protesters shouted “We will die, we will die, but we will take Iran back” near a police station that was set on fire, showed a video posted on Twitter. The account focuses on the protests in Iran and has around 100,000 followers.

Another police station was set on fire in Tehran as unrest spread from Kurdistan, Amini’s home province and where she was buried on Saturday. Amini’s death has reignited anger at issues including restrictions on personal freedoms in Iran, including strict dress codes for women, and an economy reeling from sanctions.

This led to a collective movement of women to cut their hair and remove their hijab in protest and solidarity to Mahsa Amini, which led to the arrest of a 22-year-old girl.

Iran’s clerical rulers fear a resurgence of the 2019 protests that erupted over rising gasoline prices, the bloodiest in the Islamic Republic’s history in which 1,500 people were killed.

This week’s protesters also expressed anger at Supreme Leader Ayatollah Ali Khamenei. “Mojtaba, may you die and not become the supreme leader,” a crowd was seen chanting in Tehran, referring to Khamenei’s son, who some believe could succeed his father at the top of Iran’s political establishment. Reports from Kurdish rights group Hengaw, which Reuters was unable to verify, said the death toll in Kurdish areas had risen to 15. Iranian authorities have denied that security forces killed the protesters, suggesting that armed dissidents may have shot them.

With no sign of the protests abating, authorities restricted internet access, according to accounts from Hengaw, residents and internet shutdown observatory NetBlocks. In northern Iran, crowds armed with batons and stones attacked two members of the security forces on a motorcycle as the crowd cheered, as seen in video that Reuters was unable to verify.

WITH INFORMATION FROM REUTERS