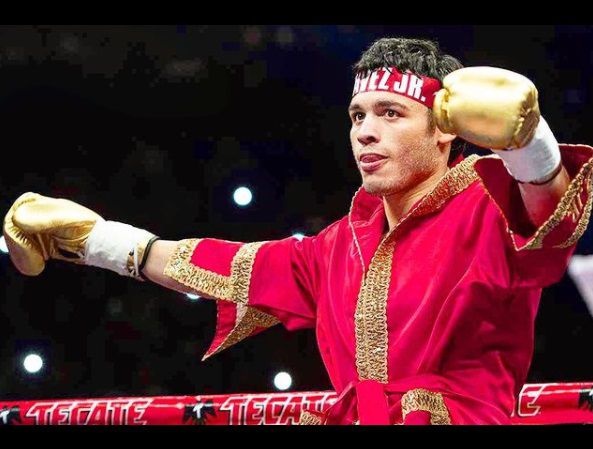 Before the end of 2021, Julio Cesar Chavez Jr. will return to the ring. Through social networks, the son of The boxing legend shared with his Instagram followers that he is preparing to wear his gloves again and give an exhibition above the ring.

After the different scandals he starred in over alleged disagreements with his father and rumors of a relapse into drugs, Julio returned to the public sphere to share that he will resume his sports career. On November 14, he shared the news.

He explained that the Dec. 18 It was the date he agreed to return to boxing matches. Until that moment of the announcement of his return, it was unknown who his rival would be since he did not give more details about it. But the doubts are over and the 35-year-old will face David Panther Zegarra, a boxer of Peruvian origin.

Recently, Chávez Carrasco shared on his official Instagram account a poster in which the promotion of his new fight is observed. The name of Zegarra and the date on which the event will take place stand out.

The promotional poster shows the image of both fighters and the place where the Chávez Jr. fight will take place. The event will take place next Saturday, December 18 at 6:00 p.m. In Sinaloa.

The original publication of the poster corresponds to the promoter JD Promotions, which is in charge of broadcasting boxing events. And for him return from Julio Cesar Chavez Jr., included it in the billboard of the Palenque of the Livestock Fair of Culiacán, Sinaloa. So that Chávez Jr. will fight again in his homeland.

Although the event has not yet been announced on a larger scale, the agency JD Promotions already started with ticket sales for the return of Julio César Chávez Junior. So far it is unknown if the fight will be televised, but what was confirmed is that the former WBC middleweight champion will have one more opportunity to claim his professional boxing career.

Who is David Zegarra?

The Panther, as he is also known in the boxing world, is a fighter originally from Lima, Peru. He made his debut in 2005 in his native country and little by little he demonstrated his skills with gloves. With a personal record of 34-6, of which 21 have been by way of knockout, will seek to return to the path of victories when it is measured against the Mexican.

In his last fights this year he took two losses. He first faced the Canadian David lemieux in Cuernavaca, Mexico. In the end the judges awarded Lemieux victory. It was later measured against Ali akhmedov from Kazakhstan.

The fight took place in the United States, but it did not reach the last round and again the judges saw his rival as the winner. So will seek to remedy such actions by facing Chávez Jr.

When was Chávez Junior’s last fight?

The last time he entered the ring was in the “Tribute to the Kings”, An event that took place at the Jalisco Stadium, where it was measured against Anderson Silva. By split decision, the Brazilian mixed arts managed to finish off Chávez Jr. and defeated him.

Even though it was a event to dismiss the legacy of the great Boxing caesar, Julio Jr. could not live up to his father’s expectations. From that moment on, he moved away from public life and not much was known about him until Julio César Chávez himself revealed that his children were on a spiritual retreat.