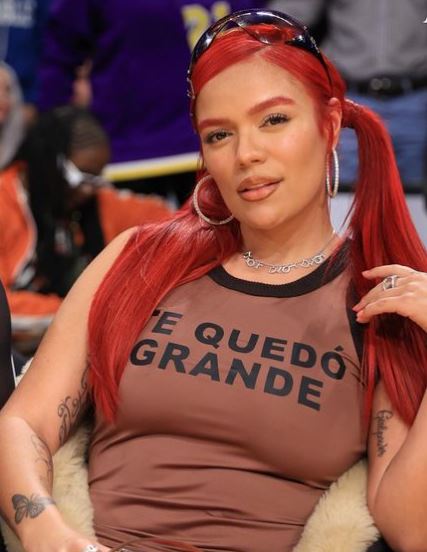 Karol G was seen at a Los Angeles Lakers game wearing a controversial shirt. Although some think that it is a nod to Shakira, others believe that it was a hint to Anuel.

The singer Karol G, who on January 20 was present at the NBA game between the Los Angeles Lakers and the Memphis Grizzlies, not only drew attention for her presence at the sporting event, but also because she wore a shirt with a powerful message.

The phrase that was read on the garment said: “It was big on you” and, after the Colombian’s photograph went viral, it began to speculate if the phrase had a particular sender.

Until now, it is speculated that the interpreter of ‘Provenza’ wore the shirt with the sole purpose of showing her support for her compatriot and singer Shakira, who a few days ago released ‘BZRP Music Sessions #53’, a song in which she leaves bad stopped her ex-husband Gerard Piqué for his alleged infidelity.

Although the 31-year-old singer has not said anything about it, many believe that the garment has to do with what happened between Shakira and Piqué.

It is speculated that Yalin La Más Viral, Anuel’s wife, reacted through a video to the Colombian in allusion to the phrase “You were big”.

In said clip you can see Yailin and Anuel very close together, he behind her, but the protagonist was Cattleya’s future mother, who dressed in black, wearing dark glasses and with her hair loose, sent a direct message.

“And all your life you will live with that headache, because he doesn’t let go of me, nor do I let go of him.” Despite the fact that Yailin La Más Viral does not mention it anymore, some users of social networks think that the message was addressed to Karol G