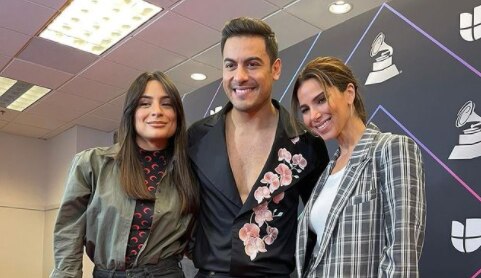 The Latin Grammy 2021 will be led by Ana Brenda Contreras, Carlos Rivera and Roselyn Sánchez. They will take place this November 18 at the MGM Grand Arena in Las Vegas, Nevada.

The Latin Recording Academy announced a few weeks ago who will present the next edition of the most important Latin music awards, that will return to the face-to-face format after the virtual ceremony organized last year for the pandemic. Let us remember that in previous years the artists were already present. Ana Brenda Contreras is the second time that it is presented, while the actress Roselyn Sánchez is the fifth time that it participates.

The singer Carlos Rivera was invited for the virtual edition last year but had to leave hours before the broadcast because he was in contact with a person infected with Covid-19 and the musician Víctor Manuelle was his replacement.

The same way, the singer and actor Mane de la Parra was invited to comment on all the details of the arrival of the attendees and nominees in the pre-programLater, he will be the one who will have the first reactions of the winners of the Latin Grammy 2021.

In addition to having all the information that Mane obtains on the red carpet, the awards will also have the comments of Sofía Reyes, Chiquinquirá Delgado, Raúl de Molina, Tony Dandrades and Borja Voces, who are once again part of the anteroom. It is important to mention that Mane continues to triumph as a songwriter and recently released his new single Almost perfect who sings with Eduin Caz for the telenovela The soulless.

Another news that surprised the public was that this year they assured the participation of Clarissa Molina and youtuber Sebastián Villalobos as “backstage” reporters of the great ceremony.

The red carpet will begin at 5:30 p.m. in Mexico, later the awards ceremony will be held at different times, in Mexico it will begin at 7:00 p.m. In the United States it will be transmitted by the Univision and in the case of Latin America, the person in charge of transmitting the gala live will be TNT. The website of Univision It will also broadcast the event as well as on its Facebook and YouTube accounts.

The important awards will bring together various singers from around the world. Similarly, after two decades of absence, Christina Aguilera will return to the stage of this award ceremony to interpret her new success For my girls, accompanied by Becky G, Nicki Nicole and Nathy Peluso. in addition Alejandro Fernández, Maná, Bad Bunny, Juanes, Rubén Blades, Danna Paola and more music stars have already confirmed their performances.

Among the different nominations is Natalia Lafourcade with her album A song for Mexico, Vol. II, Maluma in the category “Song of the year” with his famous melody Hawaii, Rich Life by Camilo, in “Best Reggaeton Interpretation” is Karol G for his interpretation of Bichota, like Bunbury, Reik, Guaynaa and many more.

Even though a while ago A controversy and a discussion arose headed by the singer J Balvin, after the famous one made a call to boycott the 22nd installment of the award due to the lack of nominations for the artists of the urban genre. The preparations for the ceremony continue one day after its transmission, leaving aside the claims of the interpreter of Your poison for the little recognition and that even generated a fight in which Pepe Aguilar was involved.