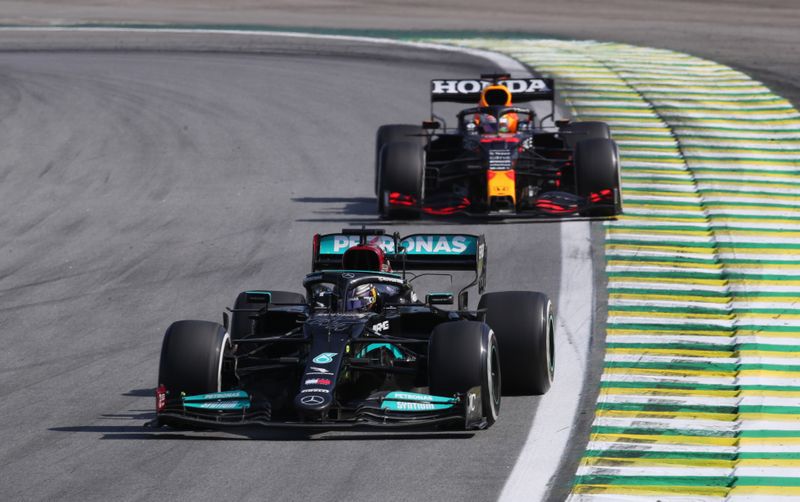 Lewis Hamilton (Mercedes), seven times Formula 1 world champion, struck the first blow in the debuting Qatar Grand Prix and will start first this Sunday, ahead of the leader, Max Verstappen (Red Bull), which exceeds it by 14 points; the Dutchman was sanctioned with five places on the starting grid for failing to respect the double yellow flag in qualifying on Saturday. It is a race in which the Spanish Fernando Alonso (Alpine) and Carlos Sainz (Ferrari) they face from fifth and seventh place, respectively.

Verstappen was penalized in qualifying when Alpha Tauri from Pierre Gasly He stopped and the sports commissioners applied double yellow flags so that the pilots slow down, but the Dutchman did not comply with it. Max and Red Bull wielded before the stewards that normally used yellow warning light panels were not flashing at that point on the runway at the time of the Gasly incident. The pilot did not receive any communication and therefore did not see the signal on his steering wheel. Despite this, the International Automobile Federation (FIA) sanctioned the championship leader.

Valtteri Bottas (Mercedes) he was also penalized, but with two places as the Finn missed a single yellow flag. With these novelties Verstappen part seventh and Bottas makes it fifth. The controversy of the sanctions was not the decision of the sports commissioners but why it took almost 24 hours to define the issue.

Hamilton, 36, who has just been exhibiting in Brazil, extended his own historical record for pole positions in the premier class to 102 by covering the 5,380 meters of the Qatari track in one minute, 20 seconds and 827 thousandths, 455 less than Verstappen dominating a qualifying with mixed luck for the teammates of the two title contenders: Finn Valtteri Bottas will start third at Losail; where Mexican Sergio Pérez, eliminated in the second round (Q2), will seek the comeback from eleventh place.

This Saturday, Hamilton put some pressure on his not so easily impressionable young rival “Mad Max”. For now, he will tackle Losail’s very long starting straight (which exceeds one kilometer) from the first place: a fast circuit, with 16 corners and a rather abrasive asphalt, which until Friday was practically unknown to everyone. And that is still a mystery, as far as the behavior of the tires in the race is concerned.

“There is a decent distance to the first corner; and it is a beautiful and wide track, so we will give it our all ”, declared Hamilton after signing the first pole in the history of the Qatar Grand Prix. “As far as the race is concerned, we don’t have a lot of experience at this track, but I don’t think it’s the easiest circuit,” he added.

“It is a very fast circuit, so it will be difficult. It will also depend on the tires we are on and the ones our rivals have. I will focus on trying to do my best, as I always do, ”said Verstappen after finishing second in qualifying.

The two Mercedes and Verstappen set their best time in Q2 on the medium tire; with which they will start this Sunday. The rest of the top ten will do so with the soft compound. All of them faced with the unknown, precisely, of the behavior of the tires in long runs, on a track with pronounced ‘pianos’ and gravel areas that can also affect the development of the race

Alfa Romeo announced Guanyu Zhou as its new driver: who is the first Chinese in the history of Formula 1