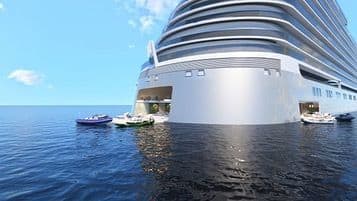 The chances of living on a cruise ship permanently are closer if the person has at least a million dollars to spend.

According to Forbes, “a startup called Storylines has announced plans to launch the MV Narrative, a 229-foot, $1.5 billion sustainable cruise ship that will be outfitted with 547 private residences, allowing its residents to travel the high seas. with a lot of style from 2025″.

The article states that “the MV Narrative is homeported in Croatia, but she won’t be spending much time there, as the cruise ship will circumnavigate the world once every three years, spending up to five days in various ports to offer her passengers a total immersion experience.

According to the article, “the new MV Narrative, a residential cruise ship with rates starting at $1 million.”

In this way, “a three-month itinerary begins in Rome with stops in Naples, the island of Lipari and Sicily, before passing through Malta, Croatia, Montenegro, Greece and Turkey”.

“The ship will focus on chasing the sun, visiting places when the weather is good. Residents can also help decide where to stop along the way. In addition to Europe, other destinations are the Caribbean, South America, the South Pacific, Australia, New Zealand, Asia and the Middle East”, she specified.

“Residences—ranging from a 72-square-foot studio with a Murphy bed to a 600-square-foot two-story, four-bedroom luxury home—can be semi-customized with various floor plans. Most have a private balcony.

Prices start at $1 million and cap at about $8 million. Buyers will own their residence for the life of the vessel, which the company says could last about 60 years, Forbes said.

If the person does not want to invest so much money, “there are also some residences available with 24-year rental contracts starting at $647,000.”

In addition to the purchase or rental price, “residents will also pay annual all-inclusive fees that cover most food and beverages, housekeeping, WiFi, laundry, gratuities, unlimited fitness classes, and much more.” plus”.

According to Forbes, “This is not the first time that a cruise ship has proposed this concept: in 2002, a condo-style ship called The World was launched, with 165 residences and a wealthy clientele. Residents must have a net worth of at least $10 million.”

It has taken the Storylines company a while to get to this point. “When the ship was first announced, she was being marketed as affordable living at sea. And with delay after delay, some critics wondered if the ship would ever get built.”

“But with the announcement of the signing of a construction contract with the Brodosplit shipyard in Split (Croatia), things are moving at full speed.”

In particular, the MV Narrative is an “environmentally sustainable ship that will run on liquefied natural gas, which is 25% lower in carbon emissions than a traditional diesel-powered ship, and will have a zero-waste agricultural market on board, as well as like a hydroponic garden powered by solar energy.”

There will be “a movie theater, a bowling alley, a golf simulator, 20 bars and restaurants, a craft brewery, a 3,000-square-meter wellness center, a yoga terrace, several swimming pools and a landing strip for helicopters so you can come and go as you please.”

At the same time, to maintain the work routine, there will be “a post office, a library with 10,000 titles, a hospital, a bank and office spaces.”

“Families with children can continue their education with the Worldschooling program, which will include excursions in the various ports of call.”

“A third of the ship’s residents are expected to live at sea full-time, while the remaining two-thirds will spend six to nine months of the year abroad.”

According to Forbes, “Mark and Beth Hunter, a married couple based in Los Angeles, told a British website that they decided to buy a residence at the MV Narrative in part so that their two teenage daughters could see the world and in part for the comforts that come with it. offers”.

“Everything is provided for on board: we won’t have to worry about shopping, cooking, cleaning or doing laundry,” says Beth Hunter. “We will have our own beds and our own things. We can’t think of a more comfortable and convenient way to see the world,” she enthused.

Why despite the lack of dollars, the collection of withholdings on exports triples that of import duties