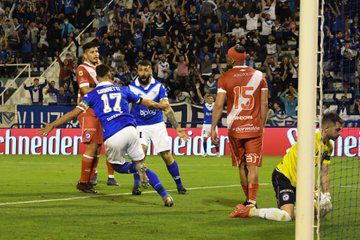 Only Lucas Pratto He knows everything that happened in this year that started it with high expectations to go on to play Dutch football in a big one like Feyenoord, but where he could never establish himself and closed it with a severe injury that brought him back to the country. Without a place in River Plate, the Bear found another chance in Vélez. And this Tuesday he had his great revenge by entering from the bench and in ten minutes converting a goal to seal the victory against Argentinos.

Pratto last played domestically on December 5, 2020 in the victory of River Plate (3-1) against Godoy Cruz, on the sixth date of the Diego Armando Maradona League Cup group zone. That day he shared the lead with Julian Alvarez who also scored one of many.

Then came the alternative of going to the Netherlands towards the end of the year, but his hopes for 2021 turned into frustrations. It is that in the Roterdam team he only played eight games, did not score any goals, and on May 9, he suffered a fibula fracture. The next day he underwent a successful operation and began his recovery.

He returned to the country and did not have the possibility of reintegrating into River Plate, so he agreed to disengage. Vélez returned where he had already played between 2011 and 2014 and won three titles, two First Division tournaments and an Argentine Super Cup.

He recovered and his first game in five months was on October 19 with the Reserva del Fort that fell 0-2 with Central Córdoba in Santiago del Estero. It was 45 minutes, but enough to get back on track.

Although the great emotion was this Tuesday when he joined from the bench of substitutes against Argentinos on the 22nd date of the Professional League. There was anxiety in the public and the coach Mauricio Pellegrino he sent him to the field of play with 12 minutes to go.

He was eager and active. In the 85th minute he made a good play on the right that ended in a cross and won everyone’s applause. But the best came at the end when in the third minute of addition, after a combination between Juan Lucero and Luca Orellano, the Bear received in the area and from the floor sent it to the network. All his teammates came to greet him in what was an emotional impact.

After the meeting, he expressed his feelings about his return and first remembered those who accompanied him, although he also made a place to throw a dart: “Just thank my family, my wife, Vélez who trusted me when they left me lying in quite a few places. I only have words of thanks to this club that it opened the doors to me in very difficult moments of my career”.

When they asked him why the affection of the people of the FortHe replied: “They love me since I arrived, not because I won. They always opened doors for me and this is my home. I just want to thank them. “

It was a perfect night at Liniers, since after Pratto’s victory and return with a goal included, the team led by Pellegrino was on the verge of qualifying for the Copa Libertadores.

With a goal from Pratto, Vélez beat Argentinos 2-0 and was one step away from the Libertadores

San Lorenzo suffered its third defeat in a row and sinks in the table: Aldosivi won 2-0 in a game with four sent off