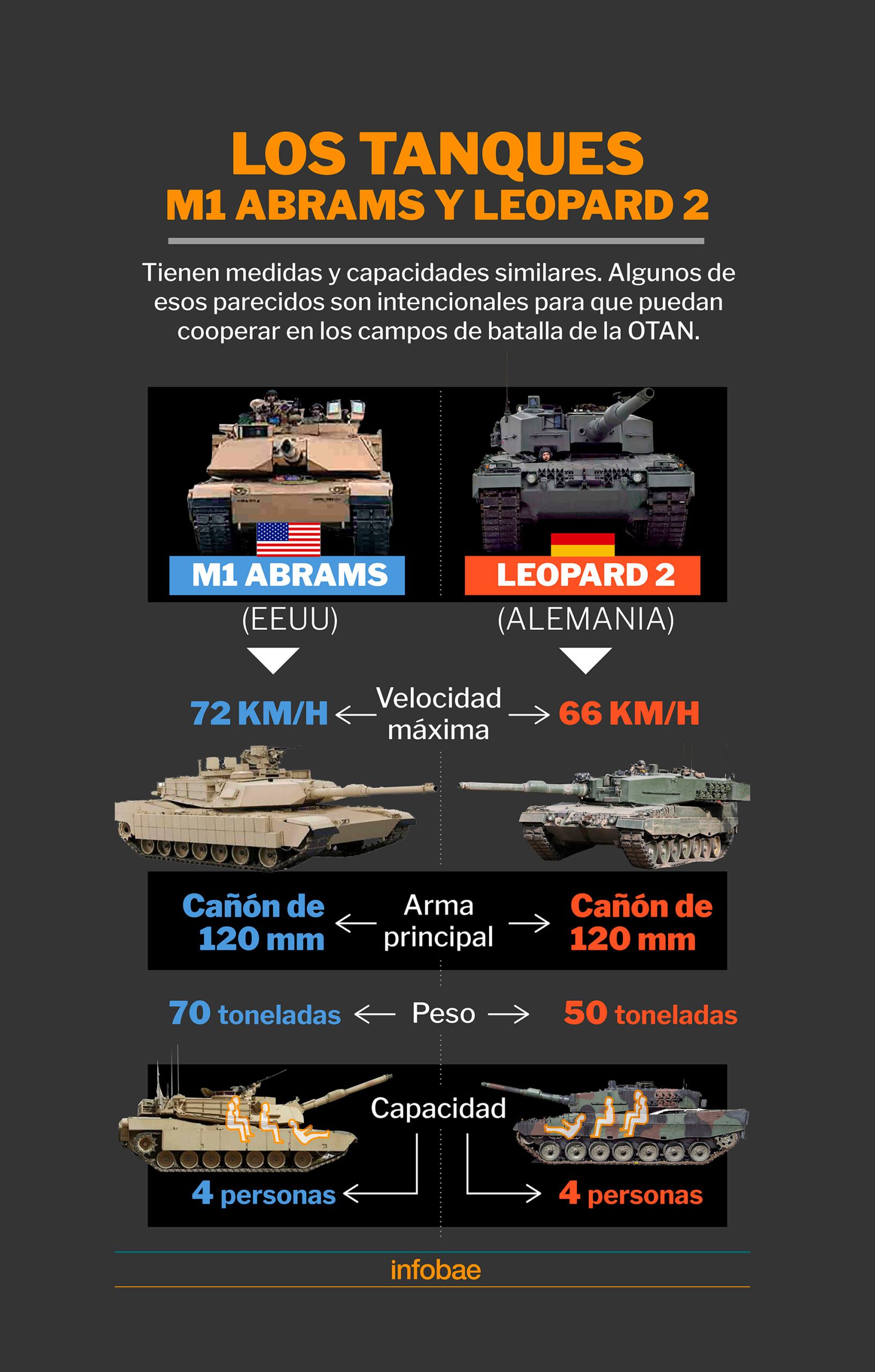 Germany Y USA announced on Wednesday that they will send main battle tanks to Ukraine, the first stage of a coordinated effort by the West to provide dozens of heavy weapons to help kyiv break fighting stalemates as Russia enters its 12th invasion. month.

Joe Biden said that US to send 31 M1 Abrams tanksreversing months of persistent arguments from Washington that they were too difficult for Ukrainian troops to operate and maintain.

The US decision follows Germany agreeing to send 14 Leopard 2 A6 tanks from its own stock. Germany had said the Leopards would not be sent unless the US put its Abrams on the table, not wanting to anger Russia without the US making a similar commitment.

“This is the result of intensive consultation, once again, with our international allies and partners,” Chancellor Olaf Scholz told German lawmakers. “It was good, and it’s important that we don’t get carried away” into the decision.

Germany’s Leopard 2 tank and the US’s M1 Abrams have similar sizes and capabilities. These similarities are not coincidental: they are designed to ensure that soldiers in both types of vehicles can cooperate on NATO battlefields.

The M1 Abrams is the main battle tank of the United States. in service since 1980, and is among the most powerful in the world. As detailed by the Washington PostIn modern versions of the vehicle, depleted uranium layers of armor provide substantial protection for those inside.

After the Gulf War, the US Army developed the M1A2 Abrams, which has been constantly improved over the past two decades. weighs more than 70 tonsreaches speeds up to about 72 kilometers per hour (42 mph) and is armed with a 120mm main gunan M2 .50 caliber machine gun and a pair of M240 7.62 mm machine guns.

Manned by a team of four soldiers, specifically the gunner, loader, driver, and commander, the Abrams can provide the mobility, firepower, and shock effect needed to exploit weak spots in enemy lines and pursue offensive advances.

The total cost of a single Abrams tank can vary, and can exceed 10 million dollars per tank if training and maintenance are included.

Krauss-Maffei Wegmann, the German manufacturer of the Leopard 2, declares in its advertising that they are “the best main battle tank in the world”which for almost half a century has combined aspects of firepower, protection, speed and maneuverability, allowing it to adapt to many types of combat situations.

tank 55 tons It has a crew of four, a range of about 500 kilometers (310 miles) and a top speed of about 66 kilometers per hour (about 42 miles per hour). Now on sale in four main variants, its initial version was first offered in 1979. Its main weapon is a 120mm gun smoothbore, and has a fully digitized fire control system.

A big point in favor of German-made tanks is their large numbers: more than 2,000 they have been placed in more than a dozen European countries and in Canada. In all, Krauss-Maffei Wegmann says that more than 3,500 units have been sent to 19 countries.

Rheinmetall AG, a German defense contractor that makes the 120mm smoothbore gun for the Leopard 2, says the tank has been fielded by “more nations than any other.”

According to a recent analysis by the International Institute for Strategic Studies, a London-based global think tank, some 350 Leopard 2s — in various versions — have been shipped to Greece, and Poland has some 250 of various types. Finland has 200 in operation or in storage.

Yohann Michel, a research analyst for defense and military affairs at the International Institute for Strategic Studies, said these tanks could allow Ukraine go on the offensive in the 11-month conflict, which has been stalled for some time after two crucial Ukrainian counteroffensives that recaptured areas held by Russian forces for months in the north-east and south.

Good news for the front

“As spring approaches, Ukrainian forces are working to defend the territory they control and preparing for additional counterattacks,” Biden said. “To liberate their land, they need to be able to counter Russia’s evolving tactics and strategies on the battlefield at very short notice.”

Several European countries have equipped their armies with Leopard 2 tanks, and Germany’s announcement means they can deliver part of their stocks to Ukraine.

“German main battle tanks, further expansion of defense support and training missions, green light for partners to supply similar weapons. I just learned about these important and timely decisions on a call with Olaf Schölz”, wrote the Ukrainian president Volodimir Zelensky On twitter. “Sincerely grateful to the chancellor and all our friends in (Germany).”

Ukrainian soldiers on the front lines welcomed the news, saying the decision comes at a critical time.

“The tanks will help reduce casualties among our soldiers.… then they will get new results and win this war faster,” said Oleksander Syrotiuk, a company commander in the 17th Tank Brigade deployed in Bakhmut.

Ukrainian soldiers and experts said that Ukrainian forces are staying no spare parts to repair the old tanks from the Soviet era and the specific ammunition they require while enduring the relentless bombardment of Russian artillery. A long-awaited Russian spring offensive is also looming.

Although it will be months before their debut, tanks will allow Ukrainian forces to launch counter-offensives and reduce casualtiesthey told the news agency PA three military commanders, including two in the army’s tank division.

“Without the new tanks, we cannot win this war”, said Maxim Butolin, 54th Brigade Tank Division Chief Sgt. He spoke with the PA by phone earlier this week from near the Bakhmut front.

Ukrainian forces have had to conserve ammunition and deal with frequent breakdowns and maintenance problems, Syrotiuk said.

“The main problem we have with our tanks is that they are old,” he said.

When expressing your preference for the Leopard 2which he said was more suitable for the terrain of Ukraine, Syrotiuk said modern tanks had more accurate targeting systems, better armor and equipment to allow for night operations.

Heavy vehicles, the focus of the next stage

The package of $400 million announced Wednesday by the US also includes eight M88 recovery vehiclestank-like tracked vehicles that can tow the Abrams if it gets stuck.

In total, France, the UK, the US, Poland, Germany, the Netherlands and Sweden will send hundreds of tanks and heavy armored vehicles to strengthen Ukraine as it enters a new phase of the war and attempts to break through the entrenched Russian lines.

While Ukrainian supporters had previously supplied tanks, they were Soviet models in stocks of countries once in Moscow’s sphere of influence but now aligned with the West. Zelensky and other Ukrainian officials insisted that their forces need more modern Western-designed tanks.

Russia’s ambassador to Germany Sergey Nechayev called Berlin’s decision “extremely dangerous” and said it “brings the conflict to a new level of confrontation and contradicts statements by German politicians about their reluctance to get involved in it.”

Scholz had insisted that any decision to provide Ukraine with the powerful tanks should be made in conjunction with Germany’s allies, primarily the US. By getting Washington to commit some of its own tanks, Berlin hopes to share the risk of any backlash from Russia.

Ekkehard Brose, head of the German Army’s Federal Academy for Security Policy, pointed out the deeper historical significance of the decision.

“German-made tanks will once again face off against Russian tanks in the Ukraine,” he said, adding that this was “not an easy idea” for Germany, which takes seriously its responsibility for the horrors of World War II. .

“And yet it is the right decision,” Brose said, arguing that it was up to Western democracies to help Ukraine stop Russia’s military campaign.

How tanks will be deployed on the battlefield

German Defense Minister Boris Pistoriuswarned that the first tanks would take a few three months to deploy to Ukraine. He described the Leopard 2 as “the best battle tank in the world”.

The German government said it planned to quickly begin train Ukrainian tank crews in Germany. The package being put together would also include logistics, ammunition and maintenance.

Kremlin spokesman Dmitry Peskov described the German and American intentions as “a rather disastrous plan.”

“I am convinced that many specialists understand the absurdity of this idea,” Peskov said.

“Simply for technological reasons, this is a pretty disastrous plan. The main thing is that this is a completely obvious overestimation of the potential (the supply of tanks) that would be added to the armed forces of Ukraine. It’s yet another fallacy, quite deep,” the Kremlin official said.

Peskov predicted that “these tanks will burn out like all the others. … Except they cost a lot, and this will fall on the shoulders of European taxpayers.” he added he.

Before Scholz’s official announcement, members of his tripartite coalition government welcomed the Cabinet’s agreement to supply the domestically-made tanks.

However, two smaller opposition parties criticized the move. The far-right Alternative for Germany, which has friendly ties to Russia, called the decision “irresponsible and dangerous.”

Scholz tried to reassure people in his country who were worried about the implications of sending tanks to the Ukraine.

“Trust me, trust the government,” he said. “By acting in a coordinated way at the international level, we will ensure that this support is possible without the risks to our country growing in the wrong direction.”

Other European nations, like Finland and Spain, they indicated their willingness on Wednesday to part with their own Leopard or similar main battle tanks as part of a larger coalition.