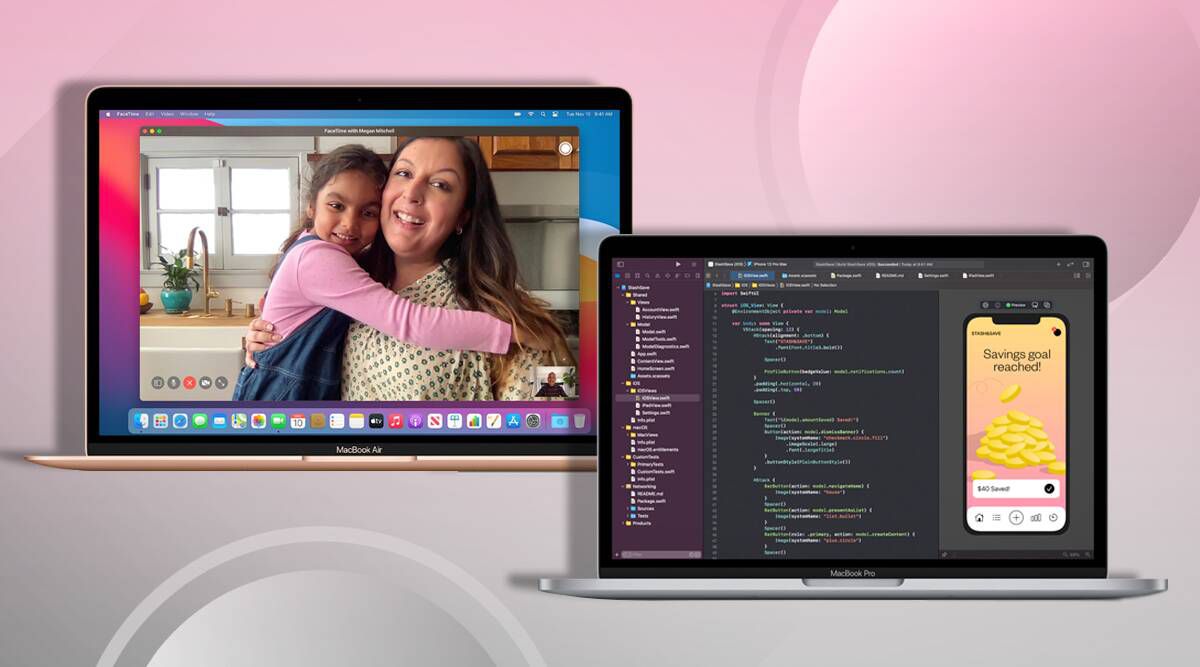 The first Apple Silicon laptops get all the attention, reviews and analysis. Also, it questions the indecisive buyer, who does not know which of the two to choose. At first, the Macbook pro seems to be a better choice for performance and MacBook Air for the price, but there is more to say.

From the outside they are very similar. With a Retina display, an M1 processor, and even relatively comparable prices, it’s easy to think of the MacBook Air and MacBook Pro as a fairly similar device. In terms of its specs and features, we noticed a bigger difference (there’s even a 16-inch MacBook Pro for those who need a bigger screen, although it still comes with a bigger processor. Intel before).

Next, we compare the MacBook Air and the MacBook Pro with M1 chip in case you are in this group of doubters and want to decide.

Layout of both MacBooks

There is really little to talk about when it comes to aesthetics, as this is after all a point that is considered extremely subjective. There will be people who love one more than the other, who see both as computers according to their tastes, or people who directly feel that they do not appreciate the differences. Nevertheless, there are some aspects to consider as we will see below:

Although they are called 13 inches, these laptops are actually exactly 13.3 inches (33.782 cm) diagonally. They have IPS technology and LED backlighting.

The only difference between the two is the level of brightness. The maximum is 400 nits for the “Air” model and 500 nits for the “Pro” model. Both are suited to any ambient light situation, Apple promises.

– Touch Bar, a difference depending on personal tastes

The future of the Touch Bar is rumored to be in jeopardy, and indeed this MacBook Pro could be the last in Apple’s line of computers to incorporate it. The reason is that the developers haven’t harnessed it to its full potential, and Apple doesn’t seem to have much to do with it.

However, there are those who may find this touchpad located on top of the MacBook Pro keyboard extremely useful. It is used all the time to control certain aspects such as brightness or volume by sliding your finger, but in specific applications. It has other utilities, such as the video editor, that can be used to navigate the timeline.

If you think this could be useful to you, you should choose yes or yes for ‘Pro’ as it is not included in the ‘Air’ model. With that said, of course there are shortcuts and different ways to perform certain actions on the MacBook Pro, but in the end there is nothing that cannot be done on the MacBook Air using keyboard shortcuts or other actions with macOS.

– Both laptops are very light, with minor differences

The MacBook Pro isn’t much heavier than the Air version, finally being a very compact laptop that also gives you portability. Apple definitely thinks that’s pretty remarkable when it comes to having both devices in your hands, but not really.

As can be seen in the specification image, The MacBook Air weighs 1.29 kg, while the MacBook Pro 1.40 kg.

Optimized applications thanks to Rosetta 2

For the review in this section, which is on two computers, we found the same performance. Note that the M1 is an ARM architecture processor never seen before on a Mac, so the developers had to adapt their respective applications to this new architecture. All Apple applications are optimized, from the simplest like Finder or Photos to the most complex like Final Cut or Logic Pro.

The case for third-party applications is different, because while many applications are now responsive, others can be opened by Rosetta 2. It is a transpiler that allows easy opening of applications based on Intel chips. While not all of them work with this system and some of them have bugs, most of them work fine and often we don’t even know that Rosetta 2 is running in the background.

The internals of these computers are very similar if we only look at the M1 chip, although there are differences in some of the settings and other components.

Yes, both computers are integrated with Apple’s M1 chip with identical differences except for the GPU core. They both have 8 cores, but one of them doesn’t work on the MacBook Air, so for all intents and purposes it is supposed to have 7 cores.

By now you may be wondering if you will see differences in your day-to-day work, and then no. If you do the correct tests you will notice the differences, because they do exist anyway, but they are not too big.

An average user may never notice this difference in processing, and even the most demanding user may not notice it.

A fan on the MacBook Pro M1 against none of the MacBook Air. It is true that the latter was not originally focused on very demanding tasks, and due to its compact shape, it does not usually have a very large ventilation system.

Apple promises that the MacBook Air won’t overheat even when doing heavy tasks. The temperature control of this device features a heat sink that replaces the previous generation fan.

Likewise, those from Cupertino inspire confidence in their users, explaining that they will obtain “a silence that is always appreciated by the absence of ventilation, which reminds us how to work with the iPad”. In the “Pro” model, the working conditions are improved by the product specifications. This one does have a fan, but as with the “Air” version, Apple explains that if activated, the slightest sound that could be produced will not be a problem.

The easiest way to download TikTok videos without a watermark

7 advantages of being an Xbox user: Kinect sensor and Halo, among the highlights