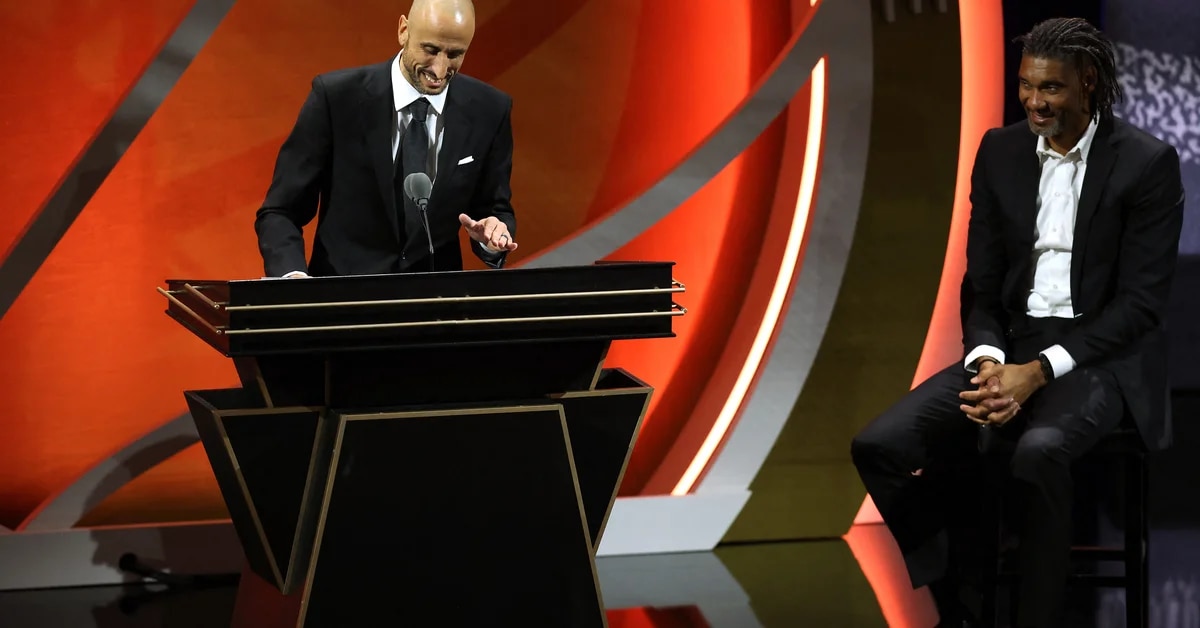 Emanuel Ginobili added another enormous distinction to his impressive sports career: he entered the Hall of Fame of basketball as part of the 2022 generation at the ceremony held in Springfield, Massachusetts. The Argentine player received one of the most important recognitions thanks to what he did –mainly– during his NBA stage with the San Antonio Spurs and the Argentine national team.

The winner of four rings in the most important league in the world gave an emotional speech at the Naismith Memorial Basketball Hall of Fame. “Those videos, it’s been a long journey. For players like me, individual achievements are not important, I am not here for what I did but for having been part of a team. One of the most important teams of the 2000s”, said the Argentine who took the lectern as the last speaker of the night accompanied by his former teammate, friend and NBA legend Tim Duncan.

The Argentine has come a long way from the age of six when he started playing for his club in Bahía Blanca: “I started when I was six or seven years old in Bahía Blanca, a block from my house.. My dad was the president, of the founders. If he didn’t work, he was in the club. My brothers played there. They picked me up from school at noon, helped me cross the street and played all day. He dribbled, shot, dribbled, shot. Six or seven hours a day. It was a great place to strengthen and develop my love for the game and also my qualities.”

In the review he mentioned his professional beginnings in Andino de La Rioja and Estudiantes de Bahía Blanca. He also took time to remember his arrival in the Argentine team and especially to thank the Italian coach Ettore Messina, who took him on his way through that country and definitely turned him into a star. “There I began to achieve what for me was an unattainable dream. The Italian experience was very valuable to me. It’s not just about how I grew as a player, but as a person,” he acknowledged.

“In those years in Reggio Calabria, I was with a national team in a tournament and I received a call in which they told me that I had been drafted by San Antonio Spurs. I said that?”. I literally couldn’t believe it. She had no expectations. She hadn’t had any conversation, my agent told me he didn’t know i was going to be drafted. Any. Caps, press conference, nothing…” he joked about being picked 57th.

“It was 16 years in San Antonio. 16 years with the same coach, the same colors, the same city, I have many people to thank. I’ll be short this time. You were so important to me and my family, I will never be able to thank you enough, ”he said looking into the eyes of Gregg Popovich, one of the star guests who had the ceremony. Also to talk to Duncan: “One of the best players in history, I learned a lot from you. How to be an example on the field.”

In the seats was also Tony Parker, the other member of the ideal trident: “We never let our egos keep us away, we knew when it was your time and when it was my time.” “We won many titles, matches, you need a lot of pieces to win championships and we had a lot”, he clarified before also reviewing other colleagues such as Bruce Bowens “You made my job so much easier,” he told her. Matt Bonner –”You were a great colleague”–, Patty Mills, Tiago Splitter, Boris Diaw and the Argentine Fabrizio Oberto your “ideal partner”.

“A hundred names. I thank you all. I loved sharing a team with you, those dinners, winning and losing together. It was fantastic,” he acknowledged. “When you talk about the San Antonio organization, it’s so much more than the players. Very qualified people who feel the culture of San Antonio. Thank you for choosing me, for keeping me, the city, the community, thank you all, ”he added.

He also reviewed his life in the Argentine team, thanked the NBA and the fans: “The craziest thing about my career is that at the same time I had such a beautiful career, as successful as the one in San Antonio, which was for the Argentine team. We always did everything as a team. I value everything. the titles, the conversations, the meetings, the jet lag, the breakfasts, that is more than friendship, it is brotherhood. Hopefully we have more adventures now. Thank you to the NBA for giving us this extraordinary context to do what we love. The best sports organization. Thanks to the fans, I felt their passion, their love, every day.”

Although the most emotional moment was when asked for “a minute” to speak in Spanish and decided to address his family in his native language. “Sepo and Lea, my brothers, thanks for clearing the way for me, thanks for the inspiration. They pushed me when I was little because I wanted to be like you, ”she began before showing the lump in her throat and the tears in her eyes.

“Dad, how I wish you were here, that you can understand what is happening today. My first faithful and biggest follower, I miss you so much old man, I miss you…”he told Yuyo, his father who is going through a delicate health problem. “Mom: I know you’re looking over there. He took me to have three sons to understand the sacrifices you made for us for so long. The effort, the dedication, the love in acts, the freedom to choose, thank you ma ”, he added excitedly.

The closing was, again in English, addressed to his wife Marianela Oroño (Manny) and her three children: Luca, Dante and Nicola. “Manny, Luca, Dante and Nico… If I have to choose a moment to stop time, it’s all the time we traveled together and the things we did.. Thank you for everything, I love who we are, and I love who you are. Thank you all”.

“It has been a pleasure. Thank you all for being here. And for more adventures together ”, she closed, addressing the audience and receiving a well-deserved ovation.

Manu Ginobili inducted into the Basketball Hall of Fame