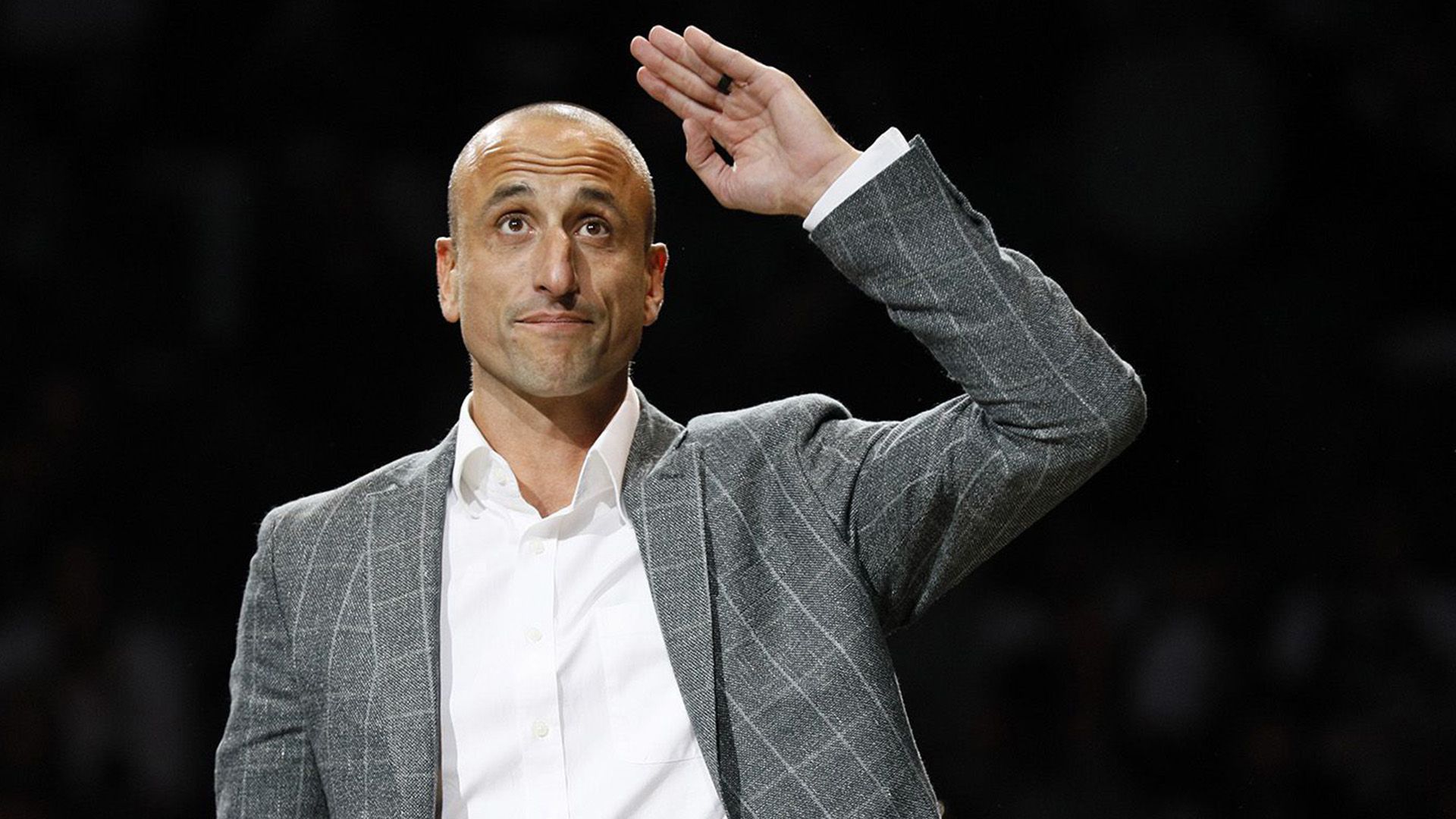 Next Saturday, September 10, will not be one more for Argentine sports. Neither for national basketball and much less for the best player in its history. Emanuel David Ginobili will definitely pass into eternity. It is already in the hearts and minds of everyone -not just us Argentines-, because Manu is one of those athletes who has achieved both milestones: being admired from reason and loved with absolute emotion. Because this 45-year-old from Bahiense combined all the best of the Argentine: he played with passion but at the same time with reason, with a warm heart and a cold mind, he won everything and behaved like a gentleman, “he laid eggs” as usual it is said, but he never overflowed: not a fight with a teammate or a rival, nor with a coach or a referee, never an expulsion, much less a scandal. We do not know of a controversy during a career that, professionally, lasted 23 years. The ideal athlete, the one who embodies only the best of Argentines, what we all want to be as athletes and citizens, the ambassador that any country wants to have in the world…

Therefore, what happens in Springfield, Massachusetts, will be the icing on the cake, a coronation, a consequence of what Manu gave. Sometimes there is so much talk about examples that when you have to use that term in a real one, on and off the field, the word seems small. In this case it falls fair. Ideal. That’s why The Bahiense’s induction into the Basketball Hall of Fame will be a strict act of justice because this is an award that goes beyond the NBA and even of our Selection. This is an award for the -immeasurable- contribution that MG made to world basketball.

He also made history as part of an organization that wrote glorious pages for a decade and a half and he was a member of one of the Big 3 –along with Tim Duncan and Tony Parker- more winners –#1 in wins- and remembered. Manu also has the impressive privilege of having the best winning percentage (72.1%, thanks to a record of 762 wins and 295 losses) in history among the 141 players who have played more than 1,000 games in the regular phase of the NBA. He is also the leading stealer (1,392) and 3-point shooter (1,495) in Spurs history, and remains fourth in points and assists. For all this, in addition to playing until he was 40 years old, his #20 jersey was withdrawn. But, of course, his does not stop there. With the National Team he achieved two more titles (2001 Pre-World Cup and 2011 Pre-Olympic Cup), a world runner-up (2002). His imprint was also deep in Europe by having a 2001 that ranked him as the best player on that continent. With Kinder Bologna in 2001 he achieved the triple crown by adding the Euroleague, the Italian Cup and the Lega, with two consecutive Lega MVPs, another in the Italian Cup and a fourth in the Euroleague.

An overwhelming resume that, just the same, is not enough to determine the deep mark that he left in these two decades: the way in which he modified the game with such a particular style (with star luxuries, such as belts, pipes and unlikely passes, and actions of worker, like throwing himself on the floor for a ball), how he patented one of the most iconic moves of all time (the Eurostep), the way he changed the importance of the Sixth Man without dwelling on everything he could lose along the way (minutes, shots, recognition and millions of dollars). And so we could continue, enumerating the merits that will make him the first Spanish-speaking player and the third Latin American player -after the Brazilians Oscar Schmidt and Ubiratan Pereira, as well as Hortencia among women- to be immortalized in the HOF. A milestone that, to achieve it, Manu had to pass three filters, with different votes from committees of specialists who analyzed titles, awards, legacy, social impact and even his behavior. Everything was taken into account. And Manu passed them comfortably. To the point of having been a unanimous election: the 24 who voted agreed that the Argentine could not miss. And all in his first year of eligibility, a privileged only for the chosen ones.

But now comes the ceremony, the time to go on stage and receive the honor and give the speech in front of millions of spectators. A moment that today goes viral on social networks. That, in history, it has epic moments, so many that they are impossible to list, because it is the moment in which the athlete looks back and thanks each one of those who helped him to be what he is: parents, siblings, children, friends, family, coaches, teammates, rivals, each and every one. It is time not to forget anyone, those who taught him, helped him, challenged him… In short, the inspiring muses.

Today Manu takes it almost as one more event. He is neither very excited nor especially looking forward to this momentas they told Infobae. The Bahiense considers that the strength of his career is over, that it was on the field, with his teammates, in each practice, in each victory, in each defeat, in each locker room… But it will be different when I get to that day, when I get to that day. venue, when he goes on stage and, above all, when he directs the microphone towards his mouth and has to start speaking… Surely his legs will tremble a little -as surely never happened in his career as a player- and his voice will crack . Because when he looks in front of him there will be many of those who helped him, side by side, in different ways. And there will be no others, the ones he loves the most.

Because George won’t be there better known as Yuyo, his father and mentor. From whom he inherited the passion for basketball and his character and way of being. That fan of basketball, of his club (Bahiense del Norte), of his family and of his son who today is going through a delicate health problem and cannot travel. And surely Raquel, her mother and unconditional support is not there either. always, who still cannot be convinced to travel and be by his son’s side. “I’d rather watch it on TV”, he says at the age of 76, the same thing he repeated so many times during Manu’s career, when they told him to go see him in the United States, Europe or anywhere in the country. She got too nervous. Sebastián, the middle brother, will not be either. Leandro, the oldest, the most extroverted, a complete character, totally different from the rest of the family, will be the only direct representative of the family.

But, of course, Manu will not be alone. The quota that the organization gave him was fully used and he even had to leave out some significant ones, such as Gaetano Gebbia, that training coach who received him when Manu arrived from Argentina, barely 20 years old, and gave him his first lessons in Reggio Calabria, first in the second division and then, once promoted, in the Lega. Neither will other of his coaches who helped him, especially in the National Team, such as Ruben Magnano -DT of the mythical Golden Generation that Manu led so well on the court-, and Sergio Hernandez. Yes, instead, it will say present Jules Lamas, Despite the fact that today he is in full work with Abel Balbo in the Central Córdoba coaching staff, seeking to save the Santiago team from relegation from the Professional League. he will travel too Oscar Egg Sanchez, the DT who somehow discovered him, the one who taught him to hit the ball between the chairs in the house at Passage Vergara 14 where his mother still lives, who bought him some “blinders” to improve dribbling, who taught him the first tricks and made his professional debut, in 1995, in Andino de La Rioja, that night at the Sports Center in Mar del Plata.

Several of the companions of the Golden Generation will also attend. For now the confirmed are: louis scola will arrive from Italy, where today he is the majority owner of the Varese club, Fabrizio Oberto from San Antonio, where he spends half the year and usually goes pedaling with Manu, his friend and former teammate of the National Team and the Spurs -champions in 2007-, Andres Nocioni from General Pico -from where he gives talks and participates in ESPN broadcasts- and pepe sanchez, from Bahía Blanca, where it has a basketball team and a high-performance center -Dow Center-. There are more guests from that legendary team, perhaps the best in the history of Argentine sports, but several are yet to be defined if they will travel. For example Paul Prigioniwho will be assistant to Néstor García at the Americup in Brazil and could not travel.

Those who will not be missing are the Spurs’ battle companions, especially the most significant, from Tony Parker to Tim Duncan, who was chosen to present Manu at the ceremony. A year ago, when the Virgin Islands took the stage to receive the honor, he spoke precisely that he could not wait to see them, Manu and Parker, in that place. “They deserve it. It was an honor to share the court with you, thanks for everything, for the friendship, your camaraderie, the brotherhood and for every experience we live together”. Now it will be the other way around, just like Tim wanted. A special and unique moment. That, even if he doesn’t believe, he will make him move. Like each one of us, who have grown up worshiping the idol…

He was chosen as the best street basketball player in history and had the luxury of saying no to the NBA: “He made more money selling drugs”