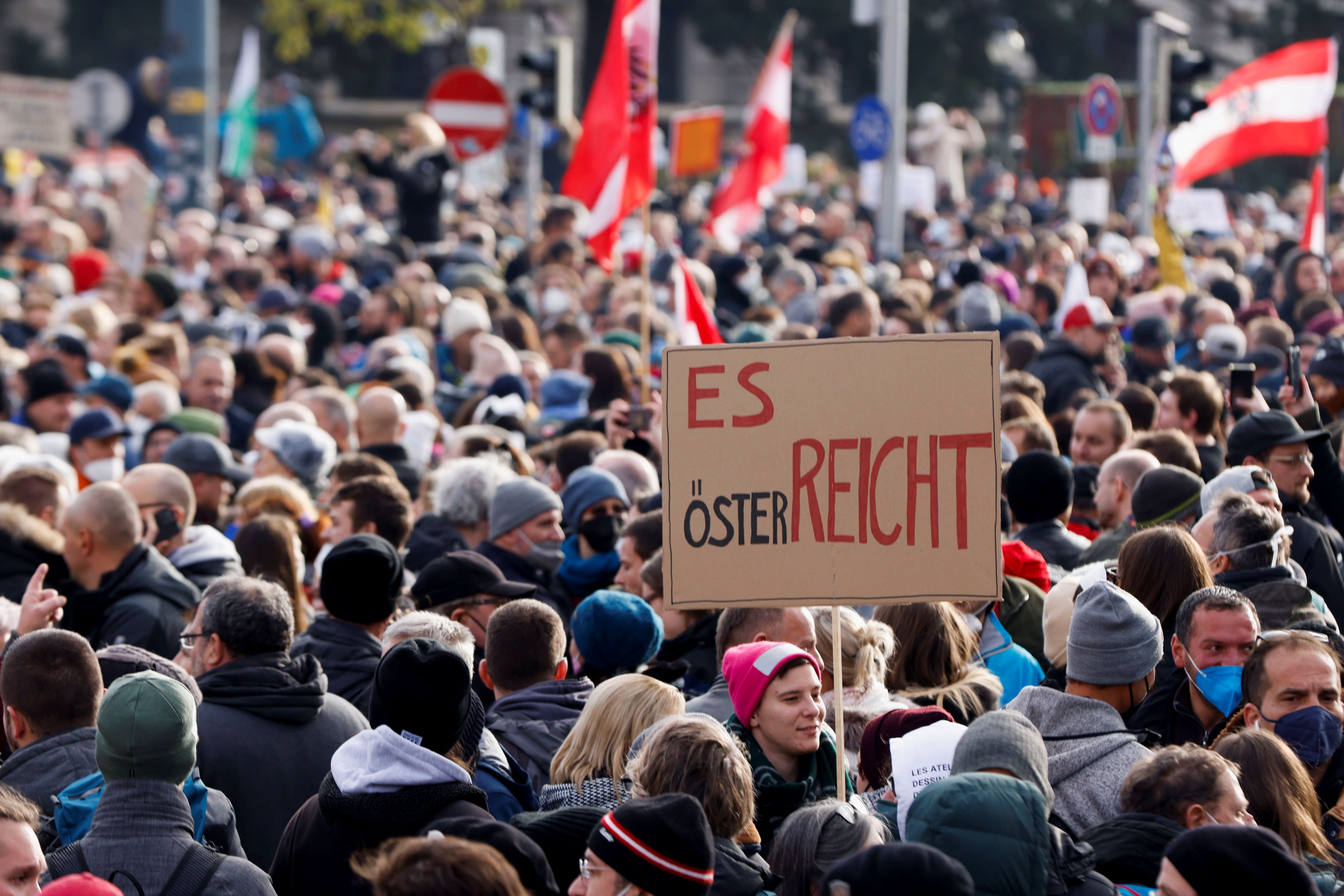 Tens of Thousands of people – about 40,000 according to the police -, many without a mask and without maintaining a safety distance, protested this Saturday in Vienna against the confinement general starting Monday in Austria and against compulsory vaccination.

The demonstration was called by the far-right party FPÖ -which estimated the participation in 100,000 people-, although its leader, Herbert Kickl, did not attend as he was in quarantine after testing positive for coronavirus.

“Endurance”, “Corona-Fake”, “Liberty” or “Down with the crown dictatorship” were some of the slogans of a crowd that converged from different parts of the city in the historic center of Vienna, near the seat of the Government.

The protesters marched through the streets wearing Austrian flags, messages denying the existence of the disease and against vaccination and, in general, rating the dictatorial restrictions against coronavirus.

Although the protest unfolded peacefully, the police informed Efe of at least five arrests in isolated incidents such as throwing bottles and other objects at officers. There have also been complaints about the use of nazi symbology, which in Austria is a crime.

Among the reasons for these complaints -according to the newspaper Der Standard– was the use of stars of David with the word “not vaccinated” by some protesters.

The yellow star was the symbol the Nazis used to marking Jews and its use by certain pandemic deniers involves comparing the measures against the covid with the Holocaust.

One person was also reported for a banner comparing current Christian Democrat Chancellor Alexander Schallenberg, with Josef Mengele, the Nazi doctor who did experiments on inmates of the Auschwitz death camp.

The government of Conservatives and environmentalists led by Schallenberg yesterday announced a 20-day lockdown starting Monday. This step occurs when the infection rate in Austria is among the highest on the continent, with more than thousand cases per 100,000 inhabitants in seven days.

In addition, to get out of the “vicious circle of confinements”, the Executive wants that from February 2022 the covid vaccine is mandatory for all residents in the country, where the immunization rate is 65.7%.

The Police deployed a large device with some 1,300 agents, who monitored the mandatory use of masks and carried out random checks of the covid certificate -which proves to be vaccinated or to have passed the disease-, since in Austria a confinement for the unimmunized has been in force since last Monday.

The far-right party FPÖ promoted the protest from social networks, where Kickl, a former interior minister who has argued that the coronavirus can be treated with an animal dewormer, ibuprofen and vitamin C, encouraged the protest to defend “freedom” and avoid “dictatorship.”

The FPÖ, the third parliamentary formation in Austria with a 20% of the intention to vote, has been radically against vaccines and restrictions to avoid infections.

Michael Schnedlitz, secretary general of the ultra formation, assured today before thousands of dedicated supporters that he was neither vaccinated nor forcibly immunized.

“I tell you whate I am not vaccinated and will not be forcibly inoculated. It is my body and it is my decision “He assured in an intervention in which he criticized the Government for wanting, as he said, to silence them and have them subjected as if they were “subjects.”

Yesterday the head of the Government linked the FPÖ with the low level of vaccination in the country and described its position as “irresponsible” and committing “an attack against public health.”

Although the presence of far-right figures and FPÖ sympathizers was clear, The rally attracted a diverse assortment of people, from conspiracy theorists to people who distrust the excessive power of the state, going through groups of Evangelical Christians.

“The confinement of the unvaccinated seems to me a mistake, I do not believe that fundamental rights should be applied depending on whether someone has a drug in the body, “he explained to Efe a university student who wore a symbol of peace.

Two other young women carried a poster that read: “Better to demonstrate with the FPÖ than to be silent with the left” and that he described the restrictions as a path to dictatorship.

The growing division in society due to measures against the coronavirus is such that Austrian President Alexander Van der Bellen appealed last night for harmony and unity in a televised speech about the new confinement.

“Reciprocal accusations don’t solve anything now. No nothing can be solved by pointing the finger at the other and directing our anger “Van der Bellen told the Austrians and encouraged them to overcome divisions that have fractured families and friends.

Frequent use of antibiotics increases the risk of severe COVID-19