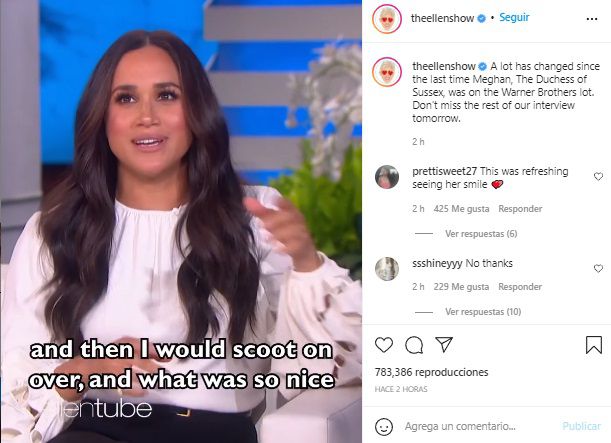 Meghan Markle will be the special guest in the next broadcast of The Ellen Show, the famous talk show hosted by Ellen Degeneres. In a preview, the television presenter shared part of the interview she did with the wife of the Prince harry where she recounted an experience she had when she was working as an actress.

The controversy is one of the elements that has marked the English royal family, currently commanded by the Queen isabel II. In recent years, the Prince Harry has captured the media attention for his courtship and consequent marriage with the well-known American actress. For that reason, both Meghan and her husband make a splash wherever they go.

On this occasion, Ellen DeGeneres will have the opportunity to publicly interview the protagonist of the series Suits. From very early, the host revealed that the broadcast next Thursday, November 18, will be attended by the Duchess of Sussex and shared part of the interview she did through her networks.

In the Instagram video, Meghan Markle said that years ago she had visited the facilities of Warner Bros in order to get a role in some production. Now, after several years and multiple scandals, the 40-year-old actress felt nostalgic to go back in for the interview.

“The security guards would always tell me, ‘Break your leg! We hope you get it! ‘ So today’s trip was very differentHe commented.

Due to the memory, DeGeneres asked her if that day she had been recognized by the security guards, to which Markle answered that she surely had and they spread the news quickly: “I think they probably told everyone, that’s how nice they were“, said.

The presenter continued with the interview with a curious topic, as she questioned the member of the British royal family about the particularity of the car that she used to drive when she worked as an actress. Meghan revealed that she was Ford Explorer Sport that it had key issues, so it could only enter through the trunk.

“He had a life of his own, he was very old“, started. “At a certain point the key stopped working on the driver’s side, so you couldn’t get in the door, so before after the auditions I would park in the back of the parking lot and I’d open the trunk, then get in and close it behind me, dragging myself across the seats to get out. This is how I came and went, “he said.

The anecdote caused a furor among the public present, who laughed with the actress for the adventure she lived before becoming the Duchess of Sussex. To applause, Meghan Markle commented that what she did to get into her car was not ideal, but she did so for a long time.

In addition, she also assured that, if at a certain moment someone caught her entering the vehicle through the trunk, she would pretend that she was looking for something so as not to reveal her true intention.

The fragment of the interview that can be seen in full this Thursday left Internet users captivated and intrigued, who commented to be surprised by the public appearance of Prince Harry’s wife and also highlighted the personality that characterizes the native of Los Angeles, California.

The talk in The Ellen Show It will set a tone in the career of Meghan Markle, since since she married the grandson of Queen Elizabeth II, she had to move away from the media to focus on her family life. Last March, the actress and her husband gave a controversial interview for Oprah Winfrey where they discussed their decision to step away from their roles as royalty.