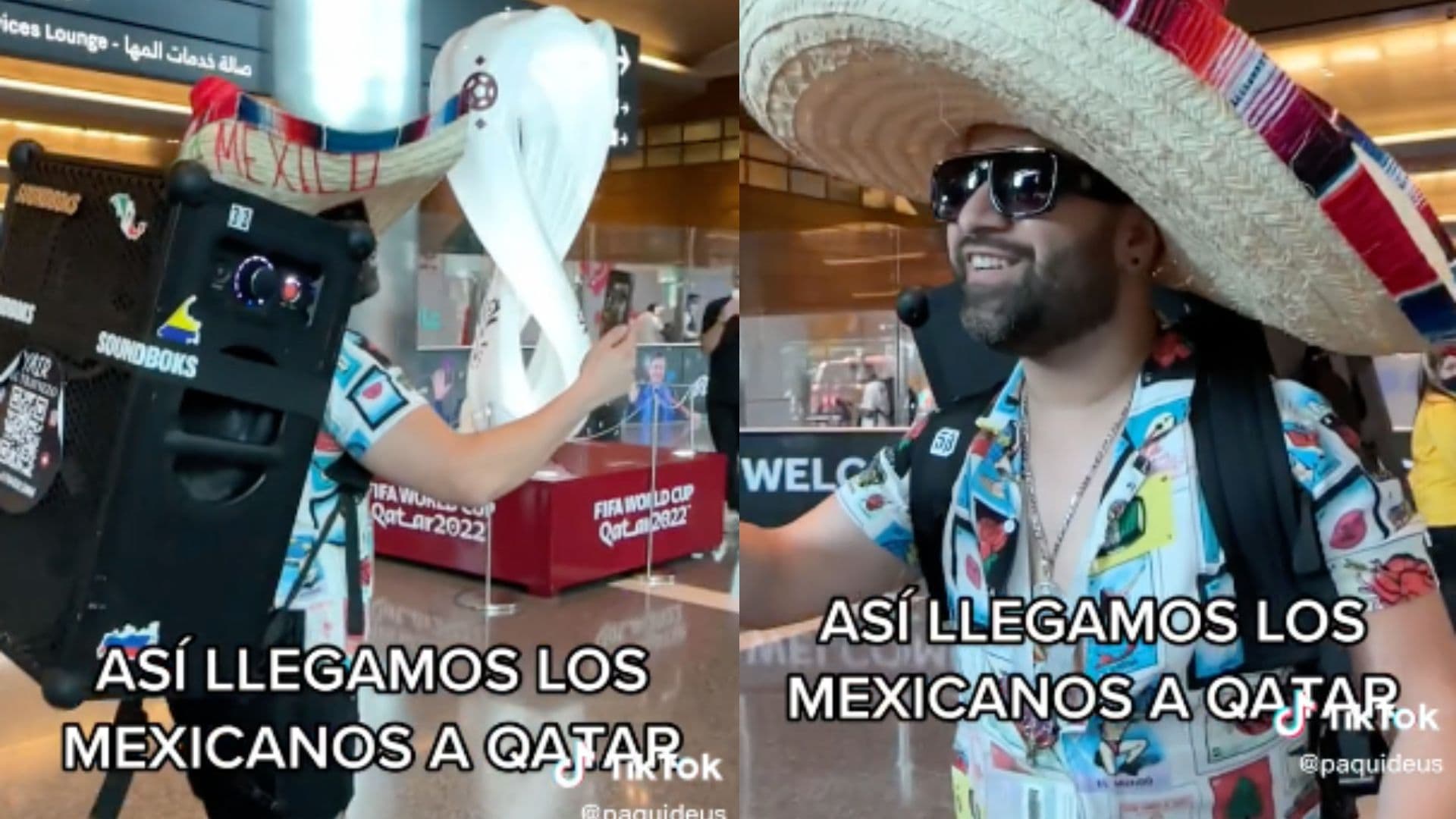 Next November 20 will be the inauguration of the World Cup Qatar 2022 and, although the Mexican fans have already begun to give something to talk about after the moment in which a fan presumed that iAlcohol entered the Middle Eastern country Despite restrictions, other compatriots have been moved by their original arrivals at the venue of this soccer fair.

It was so through TikTok A user identified as Paquito (@Paquideus) captured a Mexican who was in the facilities of a Qatar airport with a giant horn hanging from his back and a hat with the legend: “Viva México”.

“Mexicans are the best fans in the World Cups. This is how we Mexicans arrived in Qatar”, says the description of the clip that quickly exceeded 7 million.

In the brief audiovisual the man is seen wearing a shirt with figures from the lottery game and he walked carefree while his musical device resonated Mariachi’s song.

In addition, while it was recorded by some people from the site, he continued singing: “I like to play the guitar, I like to sing the son, the mariachi accompanies me when I sing my song.”

The reactions in networks did not wait and several Internet users were excited with how Mexican that moment ended up being.

“Even if we don’t make it to the Finals, but Mexico is noticed. “You as a hobby, yes, but the national team, what’s up?” “That’s all, Mexico present.” “We Mexicans are a mess ondesea.”

However, other users of TikTok They denoted concern for the fan, as they stressed that they could be creditor to some sanction due to the restrictions of that country.

“Excessive noise is one of the reasons for sanctions in that country and boy are they severe with their sanctions…”. “The first arrested and the World Cup has not yet started, that is breaking a record.” Why aren’t people informed?”, they placed.

Can you be arrested in Qatar for playing loud music?

According to Government of Mexico In that country there are several restrictions that break somewhat with the cultural forms of the West, loud music or in public spaces is not one of them. However, the Mexican authorities made some recommendations for foreigners who attend the 2022 World Cup:

-Aggressions to sexual dignity are punished with jail

-It is prohibited to use discriminatory, homophobic or racist words against any person during the World Cup matches

-Use, traffic, sale or possession of drugs is prohibited and the penalties are severe

-Shouting in the street can be sanctioned

-Photographing people without their consent is offensive, to do it with professional or semi-professional equipment a permit is required

-Swimwear is allowed in certain hotel or beach pools

-There are dress codes for both men and women that require covering the shoulders, chest, stomach and knees. In addition, tight leggings must be covered with a long shirt or dress.

Similarly, FIFA recently reported that the sale of beer in stadiums during the Qatar 2022 World Cup would be prohibited.

El Perro Bermúdez predicted the fate of El Tri in Qatar 2022; he spoke with Martinoli, Campos and Medrano

“FIFA, forgive us”; What are the most important controversies that have surrounded the Mexican National Team?

Sergio Pérez and Charles Leclerc define everything in the Abu Dhabi GP, an appointment without great results for Checo