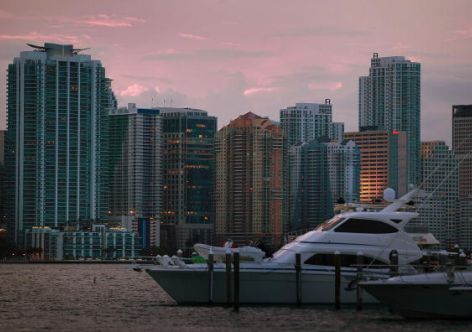 Living in one of those Biscayne Bay mansions, or one of the ultra-luxury condos in downtown Miami, has its price. And apparently a very high price.

Miami is the city in the world where luxury residential rentals have increased in price the most in the last year, according to the real estate firm specialized in the luxury market Knight Frank.

The analysis has been carried out since 2007 and it is the first time that Miami is number one in this ranking.

“The search for spacious homes on the coast combined with Florida’s low taxes acted as a magnet for a new category of remote workers in the United States.”Says the report.

But it wasn’t just luxury rentals that exploded in Miami. In the middle of the year it was known that between the first and the second quarter of the year 2021, The number of property sales over $ 10 million in Miami doubled.

Worldwide, the price of luxury rentals rose by a world average of 9.5 percent. Eighty-five percent of the cities in the study saw a rise in luxury rental prices.

Other markets besides Miami that have seen a substantial increase in the price of their luxury rentals include Seoul, in South Korea, whose average increases are around 22 percent, followed by Shanghai and Moscow, tied with a 20.5 percent increase, and Toronto, in Canada, with a 20.4 percent increase.

There are four Chinese cities in the study that saw a decline in prices between the second and third quarters of the year. According to experts, the scandal with one of the main developers in the Asian country is the reason behind this decline.

“The Evergrande crisis, certain government measures and new localized outbreaks of COVID 19 contributed to the slowdown in the price of luxury rentals in China, ”the Knight Frank report indicates.

Historic cities in this ranking, such as London, saw just a 0.7 percent increase in the prices of their luxury rentals. The English capital was hit hard by the pandemic and this may be the factor that numbed the luxury real estate market there.

New York barely saw a 1.7 percent increase in these types of rents. The financial center of the United States, and the world, is experiencing a phenomenon as a consequence of remote work. Restrictions due to COVID, high taxes and the often severe weather, have made thousands of residents of the Big Apple who can work remotely have decided to seek new horizons. There, the Miami phenomenon is largely explained.

A fishing village and a luxury building: two places made famous in New York by TV