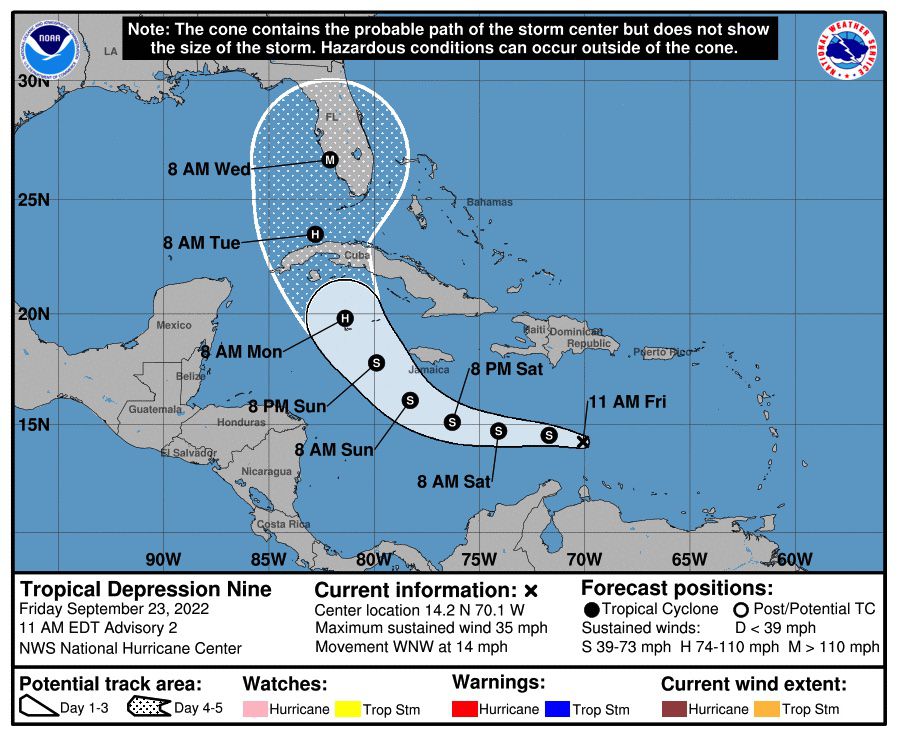 The ninth tropical depression was formed in the Caribbean Sea and so far the forecast from the National Hurricane Center has South Florida within the cone of impact. To further complicate this possibility, conditions are ripe for the phenomenon to gain strength over the weekend and at the time of impact (which could be in South Florida as early as Monday night or Tuesday morning) it will be a hurricane of up to category 3, with winds of up to 185 kilometers per hour.

But for Miami in particular, the problem is not so much the wind that a hurricane can bring but the amount of water that arrives with the rains, even if it is not a hurricane. The city has become the most wind-resistant in the world by its building code, after the hard lesson learned from Hurricane Andrew 30 years ago. But the problem is the floods that are generated when the rain is intense.

That is why the authorities called today for a press conference at the mayor of Miami in which it was announced that the city is already working before the potential arrival of a hurricane.

“The most important thing is always to be prepared. That’s why we tell you that today is the day to prepare, you can’t wait until Sunday”, recalled the mayor Francis Suarez who as a Miamian has extensive experience in this type of situation.

The recommendation is to have at least one gallon of water per person per day of emergency in homes. That is to say, if a major hurricane arrives, it is necessary to contemplate supplies for a week, which would imply seven gallons of water per person. It is important to have charged electronic objects, batteries, flashlights and, if possible, an electric generator because in a hurricane electricity is usually lost. It is also advisable to have medicine on hand, cash and important documents in a plastic bag so they do not get wet. It is important to buy non-perishable food for several days.

But beyond what residents can do on their own, the city is being proactive in trying to have as little flooding as possible.

“We have already placed water extraction pumps in key areas such as Brickell, Allapatah and Little Havana, to prevent flooding. We are also verifying that all permanent pumps are working”, added the mayor.

At the moment all services are active and working regularly. On Monday there will be garbage collection and schools. But with the passing of days, with greater certainty of what may happen with the storm, this may change.

In a matter of minutes, the forecast can change. But the main message that the authorities want to send in Miami is that being prepared is the best way to prevent complications in the coming days.