Manchester United can confirm that Ole Gunnar Solskjaer has left his coaching position. Thanks for everything Ole ”, It was the first thing the British entity published this Sunday on its Twitter account. “We are sorry to have reached this difficult decision. While the last few weeks have been disappointing, they should not hide all the work he has done over the past three years to rebuild the foundations for long-term success, ”he detailed in an official statement.

This sharp decision by the board of directors of the Red devils came after the humiliating defeat he suffered in the last match for the twelfth date of the Premier League in which his team fell by a landslide against Watford (4-1), located in position 16 of the championship.

“Ole leaves with our sincerest thanks for his tireless efforts as a manager and our best wishes for the future. Your place in the history of the club will always be assured, not only because of his history as a player, but as a great man and a coach who gave us many great moments. He will always be welcome at Old Trafford as part of the Manchester United family, ”said the farewell letter. 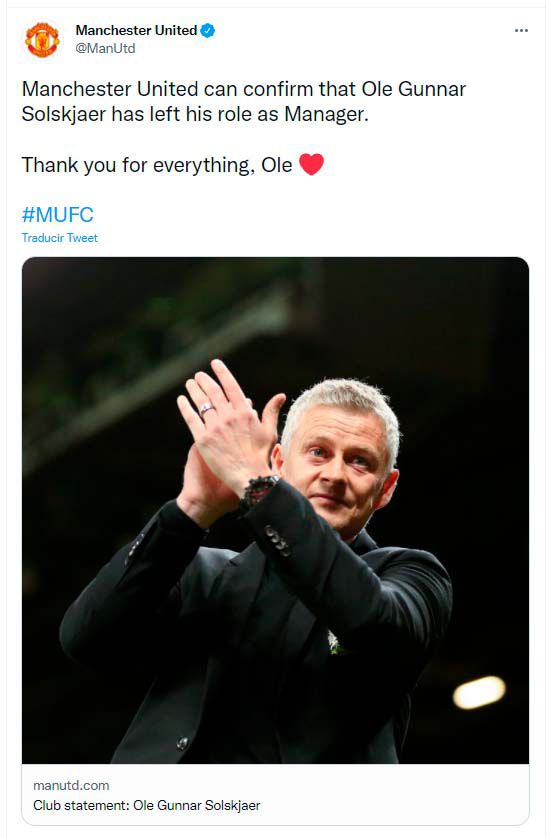 The Norwegian is leaving after almost three years as coach of the Red Devils and without having won any title in his time as a coach. Solskjaer arrived in December 2018 as an interim, following the dismissal of José Mourinho, and earned the position as permanent coach in March 2019.

The bad results played against the coach, who last July had formed his renewal until mid-2024. With this measure, however, the English club will have to pay an indemnity valued at just over $ 9 million for his dismissal.

At the same time, in the official statement, the English entity announced that, “Michael Carrick will now take over the team for the next games, while the club looks to appoint an interim manager by the end of the season.

Cristiano Ronaldo and company, under the command of the Norwegian, have only been able to win one of their last seven Premier League games -a victory, a draw and five defeats- and they are seventh with 17 points, three from the European zone and 12 from the leadership.

Apparently the intention of the Old Trafford club is try to convince Zinedine Zidane, who was not very enthusiastic about the position several weeks ago. To do this, they will increase the economic amount offered to the French, who has not trained since May when he said goodbye to Real Madrid.

The curriculum of Zizou, with its three Champions and its two Spanish leagues, it is enviable for anyone and is a great draw for a United that has not won a title for almost four years. However, if they fail to dazzle the French, the English club will wait until the end of the season to find a better position to sign a coach.

With Antonio Conte already at Tottenham Hotspur, They missed one of their best options, so they can wait until June 2022 to convince another coach of the same level. The names of the Leicester coach also sound Brendan rodgers and the Ajax coach Erik ten Hag.

It should be remembered that this Tuesday against Villarreal, Manchester United will play its continuity in the Champions League. This will be a difficult stop as they will face the team that won the final of the last Europa League.

Messi‘s game: his first goal in Ligue 1 and the “assist” for the strangest goal of PSG’s triumph

Mauro Icardi could leave PSG after his media scandals: two giants from Europe are looking for him