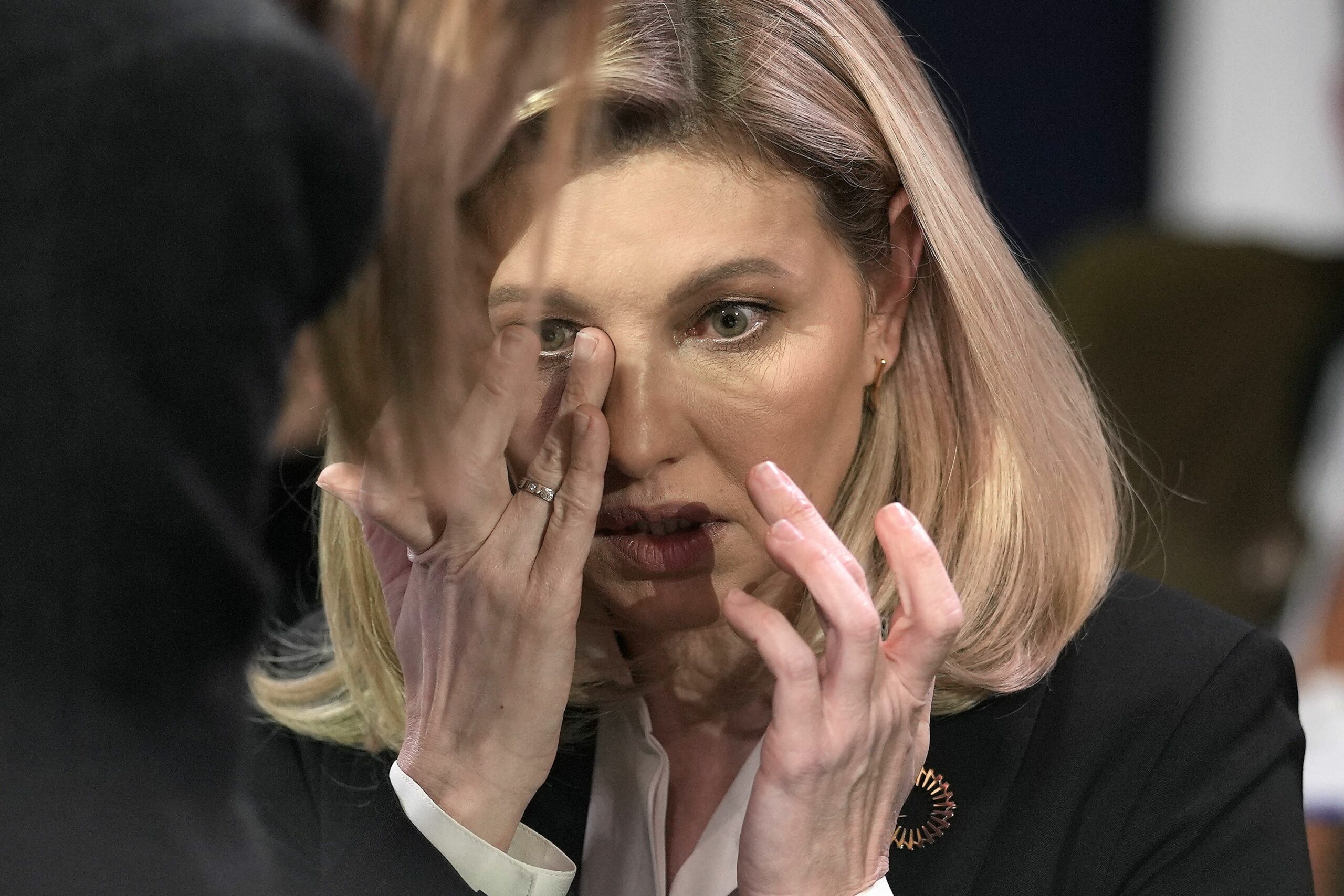 The first lady of Ukraine, Olena Zelenskáwas shown this Wednesday very “shocked” for the incident of a helicopter that crashed in the kyiv region, killing 17 people, including the Minister of the Interior and four children.

“It is another horrible day for Ukraine, another tragedy, not only because the leadership of the Ministry of Interior died in the event, but because the device fell next to a kindergarten. I have no words to express my shock,” he said. Zelenskavisibly shaken, at a press conference today in Davos.

“I do not have additional information and the investigation will say what has been the cause of the event”, pointed out, and also said that it has been a very hard event for her personally because “I knew the minister well.”

The number of fatalities in the tragedy caused by the helicopter that crashed today in the city of brovaryin the kyiv region, rose to 17, including four childrenas well as the Minister of the Interior, Denis Monastyrskyas reported by the Ukrainian State Emergency Service.

The President’s Wife Volodimir Zelenskywho has been at the davos forumalso referred to what he described as another of the great tragedies for Ukraine, the fact that several thousand Ukrainian children have been taken to Russia and illegally adopted.

“There is no dialogue at all with the Russians on thisEvery request we send through any channel we don’t get a response, I don’t know how and where to find information,” he said.

He said that they estimate at approximately several thousand children who have been taken to Russia, “But I don’t want to give a number because I don’t know for sure.”, he added.

She said that yesterday she was informed by the presidential special representative that “several dozen children are going to be returned to Ukraine, in a special operation.”

But other than that, he said they have “Knocked on all doors and to no avail.”

“I have spoken personally with the UN Secretary General, Anthony Guterresand unfortunately I believe that not even the UN has enough influence with the aggressor country to change the situation”, he lamented.

Zelenska noted that she has had good meetings in Davos“I have found a lot of support and seen that there is interest in helping Ukraine.”

In their meetings with CEOs and international organizations has spoken about support to refloat the Ukrainian economy. “We have to rebuild, better than before, and we have to start today, better than tomorrow,” he said.

The first lady, who has become a key figure in defending the Ukrainian cause at the international level, yesterday delivered several letters from her husband, Volodymyr Zelensky, addressed to various political leaders, including the president of China, Xi Jinping; the president of the European Commission, Ursula von der Leyenand the President of Switzerland, Alain Berset.

Zelenska has been one of the main speakers on the first day of sessions of the World Economic Forum in Davos, which confirmed its presence only in the last few hours for security reasons.

In her speech, the First Lady said that she had delivered the letter addressed to Xi to the vice premier of China, Liu Hewho participates in the Davos meetings.

Those addressed to the European leader and the Swiss president were delivered personally, he indicated in a speech in which he emphasized the need to act with unity to put an end to the military aggression of Russia against his country and find “a formula for peace”.

Swiss broke its traditional neutrality before the war in Ukraine and added to the sanctions of the European Union against Russia, but maintains its refusal to allow countries to which it has sold arms to transfer them to Ukraine.

For his part, Xi is the most influential political leader to have met the Russian president, Vladimir Putinon two occasions, since the beginning of the war, while China has declared itself in favor of peace, but without denouncing Moscow for his aggression.

Before a packed auditorium of business, business and political leaders, Zelenska warned that Russia will not limit itself to Ukraine in pursuing its ambitions and that the next step will be to “go after others.”

However, he emphasized to his audience that “your combined influence is greater than the challenges” and that only with unity can peace return.

In this sense, I challenge you to explain how the world can achieve common goals, such as the climate neutralityif it is not able to stop artillery attacks against civilians in Ukraine.

At least 18 peopleincluding the Minister of the Interior of Ukraine Y four childrenwere killed Wednesday in a helicopter crash on the outskirts of kyiv when he was heading to the front line of the war with Russia.

Among the fatalities are the Minister of the Interior, Denis Monastyrskyi42, his deputy minister Yevgeny Jenin and the secretary of state of the ministry, Yurii Lubkovychwho were on board the device along with six other people, the head of the Ukrainian national police said in a statement.

Monastyrskyia lawyer by profession, had been in office since July 2021. Monastyrskyithe country’s top police and emergency services official, is the highest-ranking Ukrainian official to die since the war with Russia began nearly 11 months ago.

At the moment it was not known if the incident was an accident or the result of the war with Russia. No recent fighting has been reported in the area.

“The objective of the flight (was to go) to one of the hot spots of our country where fighting is taking place,” said the Ukrainian presidential adviser, Kirilo Tymoshenko. “The interior minister was on his way there,” he added.

Nine of the deceased were traveling on board the emergency services helicopter that crashed in brovaryan eastern suburb of kyiv, pointed Ihor Klymenkohead of the Ukrainian National Police.

According to the governor of the kyiv region, Oleksii Kulebathe death list included three minors. Authorities and the media had earlier reported that the incident occurred near a Kinder garden.

In all, 29 more people were injured, including 15 children, the governor said.

A helicopter crashed near a kindergarten in Ukraine: at least 18 dead, including the Interior Minister