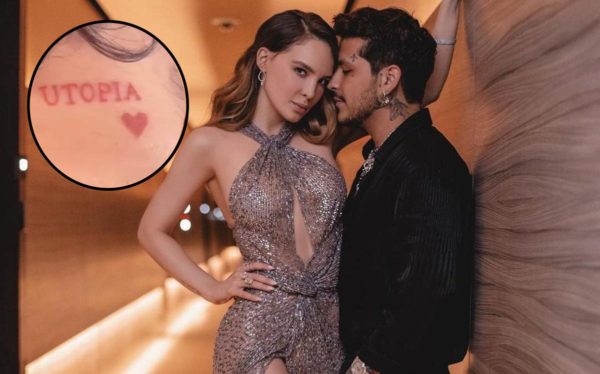 The interpreter of “Sapito” showed off the new tattoo that the regional singer made on his forehead.

Belinda showed in networks the new tattoo that Christian Nodal made on his face. “Utopia”, the name of the pop singer’s second studio album, is the word the singer wears now, although it is unknown whether the ink is temporary or permanent.

In Instagram stories it was where the singer showed off in detail her fiancé’s tattoo, which is red and also has a heart.

A few days ago, Nodal fans realized that the Mexican regional singer had begun to tattoo his face. It was on the live broadcast where he spoke of the ban imposed by Universal Music, where he showed his new look.

It is not the first tattoo that Nodal gets on his face by Belinda, when they began their love affair, he shared that he had tattooed the word “Beli” near his right ear.

But the tattoo that caused controversy in social networks was the one that was done on the chest, where the eyes of the singer of “My beautiful betrayal” were tattooed.

Even the couple was the victim of ridicule and memes, after Nodal was compared to Lupillo Rivera.