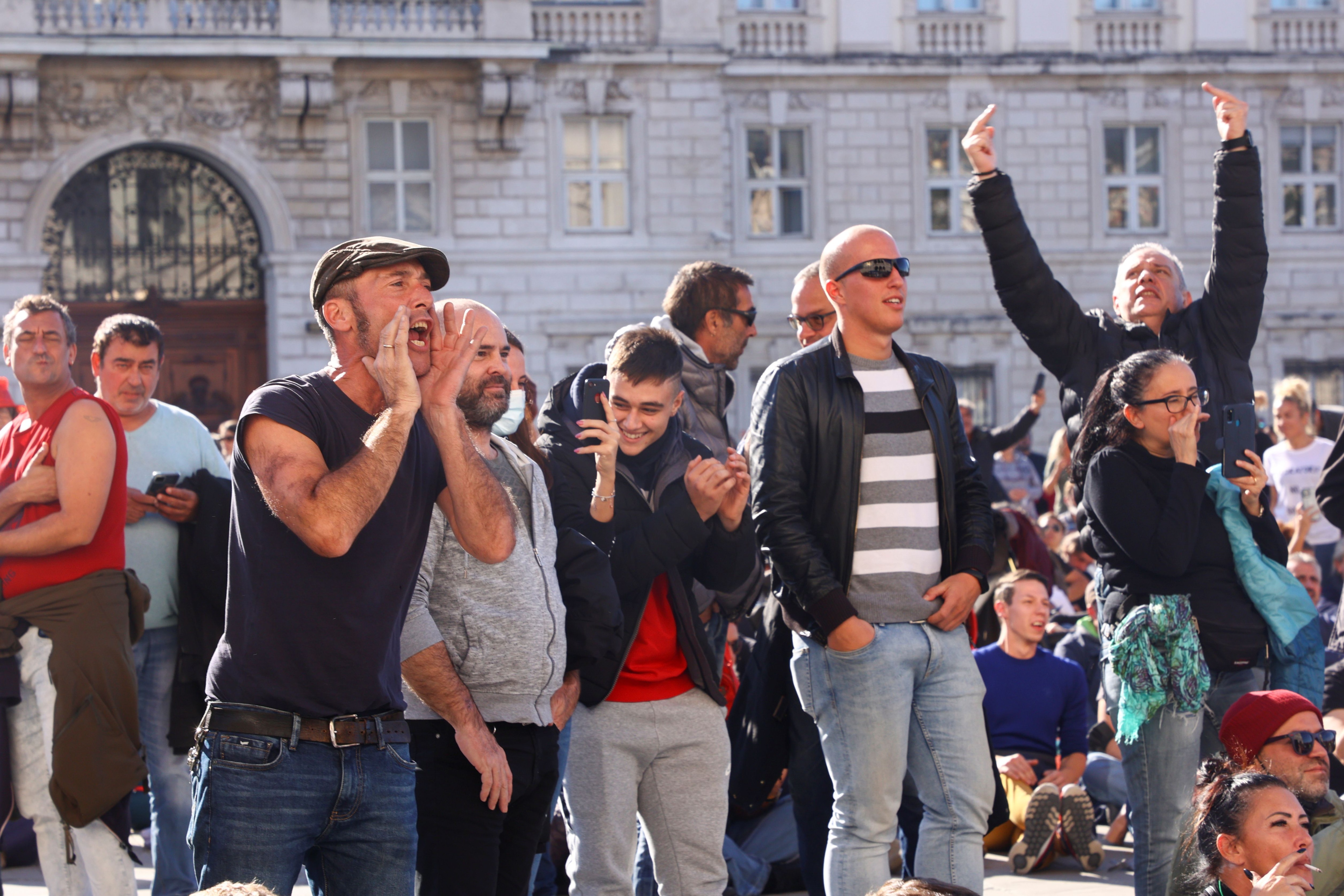 The fourth wave of Covid hits Europe. The continent is once again the epicenter of infections in the world. Austria closed. Germany with a record of cases. Great Britain on the same path. Romania as in the worst moment with 600 deaths a day. Italy returned to restrictions. Most of the 27 countries of the European Union imposing the use of the health passport to travel on public transport, attend concerts or sit in a restaurant. Many believe that this is all the fault of the anti-vaccines. The fact that some sectors of the population refuse to vaccinate is making the disease progress. And with her too social divisions spread. Those who did not agree to receive the injection are excluded from most of the activities. In some places, they can barely go outside for essential purchases. They are prohibited from entering public buildings or going to schools. Analysts blame the populist wave that swept through Europe in recent years for fomenting the denialist current that shakes the continent and threatens to create an insurmountable rift. In Eastern countries they believe that much is due to the mistrust that still persists for 70 years of communism.

And it’s not that anti-vaccine movements are something new. At the beginning of the 19th century, the British finally had access to the first vaccine in history, which promised to protect them from smallpox, one of the deadliest diseases of the time. Nevertheless, many Brits were skeptical of the vaccine. Fear of the unknown and ignorance spread rumors of dire consequences. They said that the vaccine it caused blindness, deafness, ulcers, a dreadful skin disease called “cow scabies”, and even the appearance of hooves and horns. Thus was born the world’s first anti-vaccine movement.

In the 21st century, a similar phenomenon occurs in the social networks that disseminate these “fake news”. This time it is concentrated among those displaced from globalization, those who are angry with the system, those who fell down the social ladder and who they appeal to “saving” political figures. The movement that was created around Donald Trump, in the United States, is the best example. But it is also present in Europe with the Right-wing and far-right populist governments such as those in Poland and Hungary or among those that sparked Brexit in the UK. And in the rest of the countries it occurs particularly in the most conservative areas with the same emphasis that is divided between the Republican and Democratic states of the United States. Outbreaks are occurring in counties where Republican Trumpism is strongest. There are those who refuse to vaccinate and give the virus a chance to develop. The same happens in the most conservative areas of northern Italy, Switzerland and southwestern Germany.

Europe, now, is in a complicated situation due to the denial phenomenon. The World Health Organization warned that, In the next three months, half a million people could die of Covid in that continent that already registers 60% of the cases of the whole world. An increase in deaths of ten percent and seven percent in new infections was reported during the first week of November, compared to the previous week. The new wave It threatens the incipient economic recovery and casts a black shadow over Christmas.

Given this, several European governments made the decision to separate the vaccinated from the unvaccinated. In Austria we are seeking “a massive reduction in contacts between the two groups,” Eva Schernhammer, a professor at the Medical University of Vienna and a government adviser, told the BBC. In Germany, whoever wants to travel on trains and buses must present their vaccination certificate. In France, those over 65 who want to keep their health card will have to give themselves a reinforcement. And in Italy, to work it is mandatory to present the certificate with the two doses or perform weekly PCR tests.

The phenomenon of deniers occurs, above all, by region. A good example is the city of Trieste in northern Italy, on the border with Slovenia. When the government of Rome introduced the stricter health passport, violent protests broke out in the port area where workers in the sector, supported by a broad anti-vaccine movement, claimed that the measure violated their right to work. Two weeks later, what was a splendid city of the Austro-Hungarian Empire, is experiencing an outbreak of the coronavirus that left hospitals collapsed and more than a thousand infected daily. The president of the regional government, Massimiliano Fedriga, lost his patience. “It is time to say clearly: Enough of idiocy !!!”, he yelled at the television cameras.

The Trieste outbreak shows how an unvaccinated minority, claiming loss of freedom, conspiracy theories or the right to work, can create a serious public health problem. Also, how difficult it can be to convince those who resist the vaccine of the danger. “Anti-vaccines and political populism are guided by a similar dynamic, that is, a profound lack of credibility towards elites and experts.”wrote epidemiologist Jeremías Kennedy in the European Journal of Public Health. “And we see this clearly in countries that had a rise of right-wing populist governments as of 2014.” Before joining the pro-European coalition that now governs Italy, Beppe Grillo, the leader of the populist 5 Star Movement (M5S), created in those years, stated that “At least in the Middle Ages it was God who made you sick, now it is the pharmaceutical companies with their vaccines”.

This new wave of the pandemic, said German Health Minister Jens Spahn, “It is not like the previous ones, it is not massive, it mainly affects the unvaccinated.” And the director of the WHO for Europe, Hans Kluge, assured that “Europe returns to the same point in which it was a year ago because of inadequate vaccination levels in places like Russia already relaxation of public health precautions, such as the use of face masks, especially in Britain”. All this made the restrictions and the massive use of the health card return with the consequent consequences of the territorial divisions it causes.

After registering an increase in cases of 134% during the last two weeks, The Austrian government cracked down on limiting commutes to work, school, grocery stores and health care centers for unvaccinated residents over 12 years of age. “My goal is clearly to get the unvaccinated to get vaccinated, and not to block the vaccinated,” Austrian Chancellor Alexander Schallenberg told Austrian radio Ö1. “In the long run, the way out of this vicious cycle that we find ourselves in – and it is a vicious cycle, we are passing from one wave to another, and that cannot go on ad infinitum– it’s vaccination ”.

Germany announced on Thursday plans to restricting the leisure activities of the unvaccinated in areas of the country with high rates of hospitalization. Greece said it would ban people without a vaccine pass from cinemas, theaters and gyms from Monday, the Czech Republic and Slovakia took similar measures, and Sweden will introduce next month. a vaccination passport for events of more than 100 people. President Emmanuel Macron vindicated the success of France’s health pass, which provides proof of vaccination, recent recovery from the disease or a negative test and It is required from July to enter cafes, restaurants, cinemas and take long-distance trains. Denmark, which ditched its Covid pass by dropping cases in April, reintroduced it this month. In the United Kingdom, the government of Boris Johnson has been systematically rejecting vaccination passports, although in Scotland it is required to enter discos and large events.

The YouGov organization survey released on Friday, in which more than 26,000 people in 26 countries were consulted, revealed that most Europeans are in favor of health passports. The pass demonstrating vaccination to attend major sporting events and concerts has the support of 57% of respondents in France, 59% in Germany, 62% in Italy and 64% in Spain and Great Britain, and only Poland (45%) fell below 50%.

In Eastern Europe, the traditional distrust in the system and governments, which analysts assure has its roots in the manipulations of public information carried out for seven decades by local authorities responding to the directives of the Soviet Union, is wreaking havoc. They also point out as another element “The religious rebirth” and the appearance of apocalyptic characters with sects that follow them. Even established religious authorities contribute to apathy and denial. The bishop of the Orthodox Church of southern Romania, Ambrosio de Giurgiu, told his parishioners that “Do not be fooled by what you see on television: do not be afraid of the Covid. Do not rush to get vaccinated “. The bishop is being investigated by the police for spreading dangerous disinformation at a time when Romania has the highest per capita death rate in the world due to Covid-19. 600 Romanians died on Tuesday, the most in a day since the pandemic began. The country’s death rate relative to population is almost seven times that of the United States and almost 17 times that of Germany.

The infectologist Streinu-Cercel assured the New York Times that all this could have easily been avoided. “The only real reason someone is here in this hospital is because they didn’t get vaccinated.”, said. Romania has the second lowest vaccination rate in Europe: around 44% of adults received at least one dose, only ahead of Bulgaria, with 29%, which is suffering a very high death rate from Covid, with hospitals already overwhelmed. Overall, the European Union stands at 81%, with several countries above 90%. Therefore, the problem is concentrated in that percentage of the population, be it only 10% or 70%, who, regardless of their motives and convictions, does not think for a second about the serious consequences for them and their compatriots.