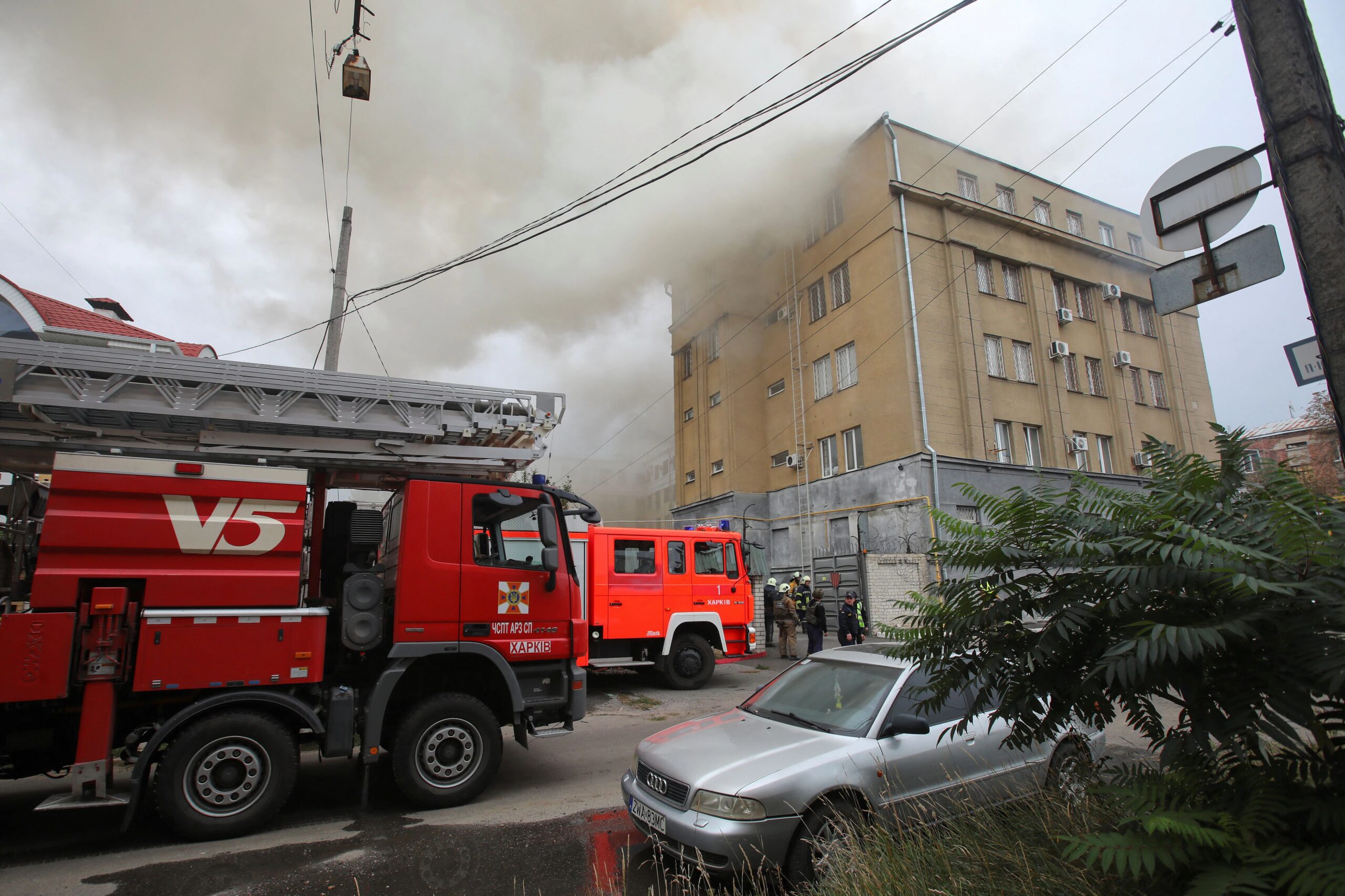 The images of the place show a corpse under the blanket and that was later carried by the paramedics.

Serhii Bolvinov, head of the Kharkiv police investigation department, said that the attack affected the local police departmentcausing a fire in the last flour of the building.

“For the second day, Russia is terrorizing Kharkiv, destroying electricity and other critical infrastructure. In some areas there is no water or gas. I assure you that communal services work as usual, everything will be restored. We can rebuild everything they (the Russians) have destroyed. Nevertheless, they will never recover from the losses they have suffered in Ukraine. I am convinced that these savages deserve to be erased forever from history into oblivion”, he expressed.

Emergency services were on the scene, dousing the flames.

Regarding the fatal victim, he pointed out: “It is about a local citizen who lived an ordinary life until today like any of us. This touches another Kharkiv family and it’s another stab wound. We will overcome this pain, we will survive all of them, and we will celebrate and dance on their graves.”

In turn, a neighbor recounted: “I heard an explosion around Shevchenko Street (…) and two more missiles whistled over us. I could clearly hear them heading south, above us. I have not seen them, but I have heard two. Then we found a cluster munition outside. I think the building will stand for another 150 years if we are as lucky as this”. In addition, he ruled out that they are military targets. “It’s a private building, someone moved in there a long time ago. One thing I know for sure, there is no Armed Forces of Ukraine here”, he explained.

Russian attacks have once again cut off electricity and water supplies in Kharkiv, the mayor of Ukraine’s second-largest city said on Monday.

Earlier, the regional governor had declared that 80% of power supply in the city had been restored after Russian bombardments on Sunday, which followed a major Ukrainian counter-offensive to retake territory in the Kharkiv region.

Moscow, which denies deliberately attacking civilian targets, has not commented on the reports.

After the withdrawal in recent days, Russian aviation and artillery were “carrying out precision strikes against units and reserves of the Ukrainian armed forces,” Russian Defense Ministry spokesman Igor Konashenkov said on Monday.

“In the areas of the towns of Kupiansk and Izium, fighters and equipment from the nationalist formation ‘Kraken’, from the 113th Territorial Defense Brigade and from the 93rd Mechanized Brigade were hit,” he said, adding that 250 Ukrainian soldiers had died. .

The Russian ministry also stated that several targets had been bombed in the Kherson region further south, where kyiv forces launched another counteroffensive. These claims could not be verified with an independent source.

The loss of the strategic city of Izium, which had 50,000 inhabitants before the war and had become a key logistics and supply point for Russian troops, could seriously undermine Moscow’s military ambitions in eastern Ukraine. , according to many military experts.

Others estimate that there is still a long way to go. “Ukraine inflicted a major operational defeat on Russia by retaking almost the entire Kharkiv region…but the current counteroffensive will not end the war,” the Institute for the Study of War said.

Experts say that Kharkiv can mark a before and after in the Russian invasion: “Ukraine changed the course of the war”