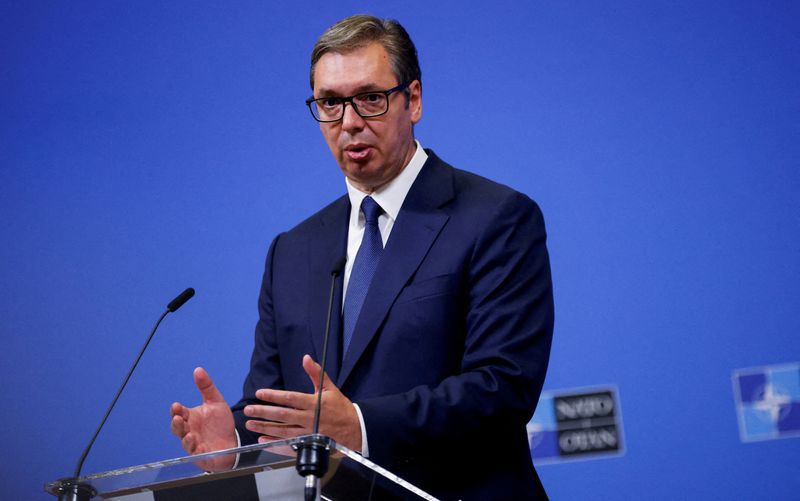 The Serbian President Alexander Vucicdenounced the publication of advertisements by the Russian group of mercenaries Wagner to recruit citizens Serbs to participate in the invasion of Ukraine.

“Why do they do that to Serbia?” Asked the head of state of that Balkan country during an interview on Monday on television, quoted by the local agency Beta.

“Why (…) they launch calls when it’s against the rules?” he added.

The pro-Kremlin milieu RT published ads earlier this month to try to recruit Serbs into the Wagner mercenary group.

The group was created in 2014 by a businessman close to the Kremlin and plays a key role in Ukraine since the Russian invasion on February 24.

Some Serb fighters joined the pro-Russian forces in Ukraine since annexation from the Ukrainian peninsula crimea in 2014.

But the exact number of Serb fighters in Ukraine has never been revealed by the authorities.

Serbia rarely criticizes Russia, an allied country. The two states, with a Slavic and Orthodox majority, have maintained strong cultural and historical ties for centuries.

Both countries also share present and past disputes with the North Atlantic Treaty Organization (NATO)an ally of Ukraine.

In March 1999, the organization bombed the still existing Federal Republic of Yugoslavia — formed by present-day Serbia and Montenegro — during the kosovo wara former Serbian province with an Albanian majority.

The attacks led to the withdrawal of the Serbs from that territory, which came under the administration of the UN. Kosovo unilaterally declared its independence from Serbia in 2008.

Along with Belarus, Serbia is also the only European country that refused to align with Western sanctions against Moscowalthough he did condemn the Russian invasion of Ukraine.

The presence of Wagner It has also been documented in Syria, Libya and countries such as the Central African Republic or Mali, where They have been accused of committing abuses against the civilian population.

Since the start of the war, tens of thousands of Russians have arrived in Serbia, one of the few countries that did not close airspace to Russia.

last january 13 The United States considered that Serbia should join the sanctions against Moscow to punish Russia for its aggression against Ukraineaccording to statements by the State Department adviser Derek Chollet.

“Russian activities that must not only be condemned but also punished. Russia launched a brutal and illegal war,” Chollet said.

He indicated that “Serbia has taken some important steps” to condemn in the UN Russian aggression, although the US will work with Belgrade to make it more supportive of Ukraine.

Serbia, a candidate for membership in the European Unionis a traditional ally of Russia, which defends Serbian interests in international forums in relation to the non-recognition of its former province of Kosovo.

In addition, Serbia is almost entirely dependent on the supply of russian gasalthough lately it has tried to diversify its energy sources.

Chollet warned that the Russian paramilitary group “Wagner”, very close to the Kremlin, tries to recruit mercenaries in Serbia and other parts of the world, and that the United States “works with Serbia and other countries to put an end to these activities.”

While Germany defines whether to send tanks to Ukraine, the Netherlands announced that it will send a defense system

More than 9,000 civilians have been killed in Ukraine since the Russian invasion began.