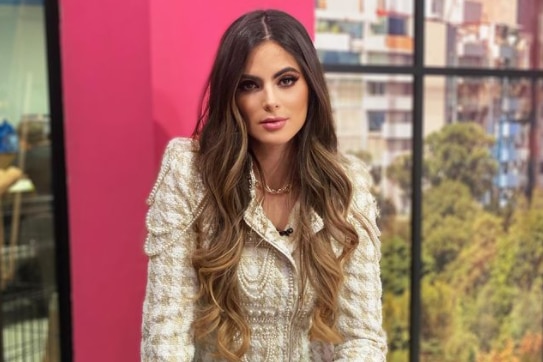 The ex-beauty queen Sofia Aragon was present on their social networks to publicize that was discharged after being hospitalized in an emergency because of severe pneumonia.

Through a short video that he uploaded to his official Instagram account, he revealed that he had already left the hospital after presenting a great improvement and his body showed favorable signs for medical treatment. “Goodbye hospital, we will have Sofi for a while”, He wrote next to an image in which you can see how they remove the serum that had been put in his hand.

Moments before, Sofía announced that her health had evolved and that there was less to be discharged. “My lungs are responding very well to the treatment. God willing, tomorrow we are out of the hospital “, he shared with his followers.

The presenter of Come the joy weekend edition thanked the expressions of affection and support from different people. “Thank you to all who have been on the lookout, for your messages and your little details. Yesterday was a very difficult day but I already feel much better ”revealed Sofía.

It is important to mention that Sofía Aragón was hospitalized at dawn this Monday due to the aforementioned pneumonia. From her social networks, the famous woman explained to her followers that she ignored her symptoms. “Three days ago I started with a temperature and a discomfort in my throat. After two COVID tests that came out negative, I trusted myself and continued with my normal life, completely ignoring the symptoms that I had in my body: sore throat, chest, lungs and head, temperature and cough, “he confessed.

The famous one declared that her discomfort took it as a small flu, until she ended up being hospitalized urgently and He asked his followers not to neglect respiratory diseases even if it is not necessarily COVID-19.

It should be noted that the driver of Aztec TV attended the morning broadcast last weekend without eventualities. Although according to her social networks, she had symptoms and felt ill since then. Even Rafael Serdán shared a photograph of Sofía in the recording forum, assuring that he “felt bad”. Sofia was covered in a blanket and what seemed like a game ended up being true.

In fact, a few days before being hospitalized, Sofia celebrated her birthday in Mexico City, at a party attended by some celebrities from the Ajusco television station, such as Aristeo Cázares and Alana Literas, who are his companions.

On the other hand, Sofía Aragón about three months ago announced that would postpone her wedding with Francisco Bernot because there were professional projects that got in the way of his personal life But later he announced that everything was canceled because they had ended their relationship and revealed that this decision hurt him, because he realized that he was not the love of the businessman’s life.

“I was the one who broke the engagement. The infatuation and affection existed but to get married you cannot just let yourself be carried away by your emotions, you have to use your head “said for the magazine Hello!.

“You always have to pay attention to the red lights, there comes a time when maybe you think that people are going to change or that promises are going to be kept to you but no, people do not change because we are what we are and it is selfish ask someone to change, “said the writer.

Sofía Aragón with improvement after being hospitalized: “My lungs are responding very well”

Sofía Aragón was hospitalized in an emergency for pneumonia