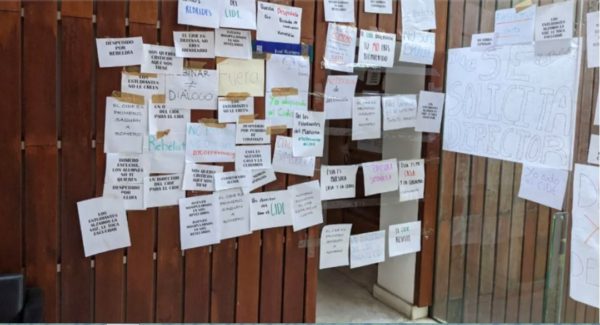 Students of the Center for Economic Research and Teaching (CIDE) they closed the interim director’s office, José Antonio Romero Tellaeche, in protest at having removed Catherine Andrews from the Academic secretary, already Alejandro Madrazo Lajous, from the CIDE management in the central headquarters region Aguascalientes, as well as for having pointed to the Public Research Center from neoliberal and describe community members as “sponges” who only absorb what their teachers want.

“The self-organized community of students have decided to symbolically close down the CIDE leadership office in protest against a process that did not consult us, did not comply with the requirements established in the call and based on that, we are looking for an address that is representative of the Center and that also guarantees the student struggle, therefore, this office remains closed ”, the students said in a video shared via social media.

Last week it was announced that Romero Tellaeche, appointed as interim director of CIDE) by the National Council for Science and Technology (Conacyt), headed by María Elena Álvarez-Buylla, dismissed Dr. Catherine Andrews from the Academic Secretariat for refusing to suspend the Academic Judging Commissions (CADIs). However, she continued with the process that had been scheduled for months.

The CADIs they were going to perform the November 16 and 17. Andrews and de Celine FA González Schont, Director of Academic Assessment, They sent a letter to Romero Tellaeche to explain that he did not have the power to suspend unilaterally, but he could put it to a vote and began the CADI.

“I was dismissed from the CIDE Academic Secretariat for insisting on compliance with the rules and statutes that regulate the tasks and obligations of this position”, Catherine Andrews said, via social media, accompanied by a report of events in which he narrated that “(Dr. Romero) affirmed that the actions of Mtra. González and I constituted ‘an act of rebellion’ and asked the members of the CADI not to participate in it ”.

But the Andrews case is not the only one, since the researcher Alejandro Madrazo Lajous was removed last October as director of the CIDE in the central region of Aguascalientes for “loss of confidence”.

In a dialogue the November 18th with part of the student community, Romero Tellaeche said that students are like “Sponges” that they only absorb what their teachers want, in addition to pointing out the CIDE as neoliberal.

“After almost three hours of webinar, we came to the conclusion that the Acting Director is unaware of the institution he presides over. During the event, Dr. Romero Tellaeche disqualified, without any basis, the student community. He argued that we do not understand or try to resolve the political, economic, social and cultural situations in Mexico. In addition, to affirm that we only seek our individual success, we are only people from privileged social strata and to mobilize ourselves solely because we are controlled by the media and by teachers who refuse to lose supposed privileges, among other things. We deny these claims and reiterate the diversity and plurality of the community, ”they said in a statement.

The following day, the CIDE community demonstrated outside the facilities of the National Council of Science and Technology for about three hours. In the end they tried to deliver a request form in which, among other things, they asked that Catherine Andrews return to her position as Academic secretary and that Romero Tellaeche be removed, but at all times the Conacyt authorities of Alvarez-Buylla they refused to receive the document.

“Since his untimely arrival at the interim leadership of CIDE, José Antonio Romero Tellaeche, has made unjustified accusations against the community and has violated it by not adhering to the institution’s regulations. For this reason, the student community has organized ourselves autonomously to demand his immediate dismissal. and the restitution of the process of election of the new holder of the address. We issue this statement to reiterate that we are unaware of any leadership or moral authority of Dr. Romero Tellaeche, as demonstrated after the demonstration held. Friday, November 19 in the offices of the National Council of Science and Technology (Conacyt) ”, they indicated in another statement dated November 22.

They added that “the Conacyt authorities refused to receive our request sheet and that, on Friday afternoon, Dr. Romero Tellaeche violated professional ethics by stating in a statement that he had established a channel of communication with the student community. There is no kind of formal “agreement” to dialogue. After paths and repeated absences, there are no conditions to have a conversation that solves the conflict. We reiterate our request for dialogue with the Conacyt authorities and the immediate resignation of José Antonio Romero Tellaeche ”.

In the absence of a response from the authorities, this morning, the director’s office was “Closed”. The students put up posters with slogans such as “We are not sponges”, “He tried to manipulate us, we already rebelled”, “Romero listens, the students don’t love you”, “The students raise our voices, it is his turn to listen” and “Fired due to loss of confidence.”